Pethidine, also known as meperidine and sold under the brand name Demerol among others, is a pain medication of the opioid type.[1] Specifically it may be used for moderate to severe pain for a few days.[1] It is not a first line opioid and long term use is not recommended.[1] It can be used mouth, or by injection into a muscle, or vein.[1] It; however, is not very effective by mouth and such use is associated with greater toxicity.[1] Onset of effects is within an hour and last for up to 4 hours.[1]

Common side effects include sleepiness, seizures, agitation, vomiting, constipation, and decreased effort to breath.[1] Other serious complications include heart arrhythmias, psychosis, addiction, low blood pressure, and serotonin syndrome.[1] Prolonged use during pregnancy may result in neonatal abstinence syndrome in the baby.[4] Pethidine works by binding and activating the opiate receptor.[1]

Pethidine was the most widely used opioid in labour and delivery[9] but has fallen out of favour in some countries such as the United States, due to drug interactions (especially with serotonergics) and its neurotoxic metabolite, norpethidine.[10] It was a commonly used in the United Kingdom during labour, but has been superseded somewhat by diamorphine (heroin) and other opioids (e.g. hydromorphone) to avoid serotonin interactions since the mid-2000s.[11]

While less commonly used for pain it may still be used occasionally for shivering that occurs after surgery.[7]

Before 2003 it was on the World Health Organization's List of Essential Medicines.[12][13]

The side effects of pethidine administration are primarily those of the opioids as a class: nausea, vomiting, dizziness, diaphoresis, urinary retention, and constipation. Due to moderate stimulant effects mediated by dopamine and norepinephrine, sedation is less likely compared to other opioids. Unlike other opioids, it does not cause miosis because of its anticholinergic properties. Overdose can cause muscle flaccidity, respiratory depression, obtundation, cold and clammy skin, hypotension, and coma. A narcotic antagonist such as naloxone is indicated to reverse respiratory depression and other effects of pethidine. Serotonin syndrome has occurred in patients receiving concurrent antidepressant therapy with selective serotonin reuptake inhibitors (SSRIs) or monoamine oxidase inhibitors, or other medication types (see Interactions below). Convulsive seizures sometimes observed in patients receiving parenteral pethidine on a chronic basis have been attributed to accumulation in plasma of the metabolite norpethidine (normeperidine). Fatalities have occurred following either oral or intravenous pethidine overdose.[14][15]

Pethidine has serious interactions that can be dangerous with monoamine oxidase inhibitors (e.g., furazolidone, isocarboxazid, moclobemide, phenelzine, procarbazine, selegiline, tranylcypromine). Such patients may suffer agitation, delirium, headache, convulsions, and/or hyperthermia. Fatal interactions have been reported including the death of Libby Zion.[16] Seizures may develop when tramadol is given intravenously following, or with, pethidine.[17] It can interact as well with SSRIs and other antidepressants, antiparkinson agents, migraine therapy, stimulants and other agents causing serotonin syndrome. It is thought to be caused by an increase in cerebral serotonin concentrations. It is probable that pethidine can also interact with a number of other medications, including muscle relaxants, benzodiazepines, and ethanol.

Like morphine, pethidine exerts its analgesic effects by acting as an agonist at the μ-opioid receptor.[18]

Pethidine is often employed in the treatment of postanesthetic shivering. The pharmacologic mechanism of this antishivering effect is not fully understood,[19] but it may involve the stimulation of κ-opioid receptors.[20]

Pethidine has structural similarities to atropine and other tropane alkaloids and may have some of their effects and side effects.[21] In addition to these opioidergic and anticholinergic effects, it has local anesthetic activity related to its interactions with sodium ion channels.

Pethidine's apparent in vitro efficacy as an antispasmodic agent is due to its local anesthetic effects. It does not have antispasmodic effects in vivo.[22] Pethidine also has stimulant effects mediated by its inhibition of the dopamine transporter (DAT) and norepinephrine transporter (NET). Because of its DAT inhibitory action, pethidine will substitute for cocaine in animals trained to discriminate cocaine from saline.[23]

Several analogs of pethidine such as 4-fluoropethidine have been synthesized that are potent inhibitors of the reuptake of the monoamine neurotransmitters dopamine and norepinephrine via DAT and NET.[24][25] It has also been associated with cases of serotonin syndrome, suggesting some interaction with serotonergic neurons, but the relationship has not been definitively demonstrated.[23][25][26][27]

It is more lipid-soluble than morphine, resulting in a faster onset of action. Its duration of clinical effect is 120–150 minutes, although it is typically administered at 4– to 6-hour intervals. Pethidine has been shown to be less effective than morphine, diamorphine, or hydromorphone at easing severe pain, or pain associated with movement or coughing.[23][25][27]

Like other opioid drugs, pethidine has the potential to cause physical dependence or addiction. It may be more likely to be abused than other prescription opioids, perhaps because of its rapid onset of action.[28] When compared with oxycodone, hydromorphone, and placebo, pethidine was consistently associated with more euphoria, difficulty concentrating, confusion, and impaired psychomotor and cognitive performance when administered to healthy volunteers.[29] The especially severe side effects unique to pethidine among opioids—serotonin syndrome, seizures, delirium, dysphoria, tremor—are primarily or entirely due to the action of its metabolite, norpethidine.[25][27] 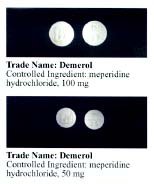 Pethidine is quickly hydrolysed in the liver to pethidinic acid and is also demethylated to norpethidine, which has half the analgesic activity of pethidine but a longer elimination half-life (8–12 hours);[30] accumulating with regular administration, or in kidney failure. Norpethidine is toxic and has convulsant and hallucinogenic effects. The toxic effects mediated by the metabolites cannot be countered with opioid receptor antagonists such as naloxone or naltrexone, and are probably primarily due to norpethidine's anticholinergic activity probably due to its structural similarity to atropine, though its pharmacology has not been thoroughly explored. The neurotoxicity of pethidine's metabolites is a unique feature of pethidine compared to other opioids. Pethidine's metabolites are further conjugated with glucuronic acid and excreted into the urine.

Pethidine is the prototype of a large family of analgesics including the pethidine 4-phenylpiperidines (piminodine, anileridine and others), the prodines (alphaprodine, MPPP, etc.), bemidones (ketobemidone, etc.) and others more distant, including diphenoxylate and analogues.[31] 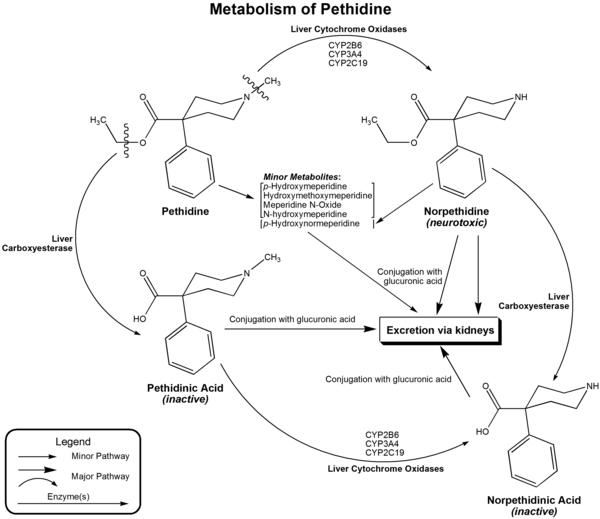 It was developed as a potential anticholinergic agent by the German chemist Otto Eisleb, its analgesic properties were first recognized by Otto Schaumann while working for IG Farben, Germany.[32]

Compared with morphine, pethidine was initially thought to be safer, carry a lower risk of addiction, and to be superior in treating the pain associated with biliary spasm or renal colic due to its putative anticholinergic effects.[6] These were later discovered to be incorrect, as it carries an least equal risk of addiction, possesses no advantageous effects on biliary spasm or renal colic compared to other opioids, and due to its toxic metabolite, norpethidine, it is more toxic than other opioids—especially during long-term use.[6] The norpethidine metabolite was found to have serotonergic effects, so pethidine could, unlike most opioids, contribute to serotonin syndrome.[6][33]

This article uses the terms "hazardous use", "harmful use", and "dependence" in accordance with Lexicon of alcohol and drug terms Archived 2004-07-04 at the Wayback Machine published by the World Health Organization (WHO) in 1994.[36] In WHO usage, the first two terms replace the term "abuse" and the third term replaces the term "addiction".[36][37]

Pethidine can be produced in a two-step synthesis. The first step is reaction of benzyl cyanide and chlormethine in the presence of sodium amide to form a piperidine ring. The nitrile is then converted to an ester.[38]

Pethidine is in Schedule II of the Controlled Substances Act 1970 of the United States as a Narcotic with ACSCN 9230 with a 6250 kilo aggregate manufacturing quota as of 2014. The free base conversion ratio for salts includes 0.87 for the hydrochloride and 0.84 for the hydrobromide. The A, B, and C intermediates in production of pethidine are also controlled, with ACSCN being 9232 for A (with a 6 gram quota) and 9233 being B (quota of 11 grams) and 9234 being C (6 gram quota).[39] It is listed under the Single Convention for the Control of Narcotic Substances 1961 and is controlled in most countries in the same fashion as is morphine.