Nimesulide is a nonsteroidal anti-inflammatory drug (NSAID) used for acute pain and painful periods.[1][3] Use is recommended for less than 15 days.[1] There is no evidence of benefit over other NSAIDs and due to side effects it is considered a second line treatment.[2][1]

Nimesulide has been approved for medical use in parts of Europe since 1985.[1] It has never been approved in the United States, United Kingdom, Canada, Australia, New Zealand, or Japan due to safety concerns.[2] Approval has been withdrawn in a number of countries including Spain, Ireland, and Finland.[2]

Nimesulide is not available in the United States, however is approved in some countries for acute pain.[6] It may be used for pain, including period pains. Nimesulide is not recommended long-term, as for chronic conditions such as arthritis. This is due to its association with an increased risk of liver toxicity, including liver failure.[7]

Due to concerns about the risk of liver toxicity, nimesulide has been withdrawn from market in several countries (Spain, Finland, Belgium, Ireland, and United States).[8] Liver problems have resulted in both deaths and the need for transplantation.[6] This may occur in as little as three days after starting the medication.[6]

Nimesulide may cause the following side effects:[medical citation needed]

It should be avoided by children under 12 and people with liver problems or flu-like symptoms.

Less than 10 days of nimesulide does not appear to increase the risk of hypothermia, gastrointestinal bleeding, epigastric pain, vomiting, diarrhea, or transient, asymptomatic elevation of liver enzymes compared to ketoprofen, paracetamol, mefenamic acid, aspirin, or ibuprofen in children. However, data does not speak to populations less than 6 months old.[9]

Women should use the drug with caution during lactation and nimesulide is contraindicated during pregnancy, and research suggest that it is also contraindicated in lactating women.[10]

Nimesulide has a relatively rapid onset of action, with meaningful reductions in pain and inflammation observed within 15 minutes from drug intake.[13][14]

The therapeutic effects of Nimesulide are the result of its complex mode of action, which targets a number of key mediators of the inflammatory process such as: COX-2 mediated prostaglandins, free radicals, proteolytic enzymes, and histamine.[13] Clinical evidence is available to support a particularly good profile in terms of gastrointestinal tolerability.[15]

It was launched in Italy for the first time as Aulin and Mesulid in 1985 and is available in more than 50 countries worldwide, including among others France, Portugal, Greece, Switzerland, Belgium, Russia, Thailand, and Brazil.[16] Nimesulide has never been filed for Food and Drug Administration (FDA) evaluation in the United States, where it is not marketed. 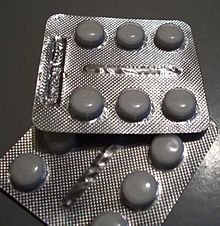 It is available in a variety of forms: tablets, powder for dissolution in water, suppositories, mouth dissolving tablets, and topical gel.

A recent evaluation from the European Medicines Agency (EMA) concluded that the overall benefit/risk profile of nimesulide is favourable and in line with that of the other NSAIDs such as diclofenac, ibuprofen, and naproxen.[citation needed]

Several reports have been made of adverse drug reactions in India.[17][18][19][20] On February 12, 2011, Indian Express reported that the Union Ministry of Health and Family Welfare finally had decided to suspend the pediatric use of the analgesic, Nimesulide suspension.[21] From 10 March 2011 onward Nimesulide formulations are not indicated for human use in children below 12 years of age.[22]

On September 13, 2011 Madras High Court revoked a suspension on manufacture and sale of paediatric drugs nimesulide and phenylpropanolamine (PPA).[23]

On September 21, 2007 the EMA released a press release on their review on the liver-related safety of nimesulide. The EMA has concluded that the benefits of these medicines outweigh their risks, but that there is a need to limit the duration of use to ensure that the risk of patients developing liver problems is kept to a minimum. Therefore, the EMA has limited the use of systemic formulations (tablets, solutions, suppositories) of nimesulide to 15 days.[24]

The Irish Medicines Board has decided to suspend nimesulide from the Irish market and refer it to the EU Committee for Human Medicinal Products (CHMP) for a review of its benefit/risk profile. The decision is due to the reporting of six cases of potentially-related liver failures to the IMB by the National Liver Transplant Unit, St. Vincent's University Hospital. These cases occurred in the period from 1999 to 2006.[25]

In May 2008, Italy's leading daily paper Corriere della Sera and other media outlets[citation needed] reported that a top-ranking official at Italy's medicines agency AIFA had been filmed by police while accepting bribes from employees of pharmaceutical companies.[26][27] The money allegedly was being paid to ensure that certain drugs would be spared scrutiny from the drugs watchdog. The investigation had started in 2005 following suspicions that some AIFA drug tests had been faked. Eight arrests were made. Nimesulide can be bought carrying a prescription from a physician that is kept as a receipt at the chemist shop, nominally allowing strong control over selling.

The original manufacturer of Nimesulide is Helsinn Healthcare SA, Switzerland, which acquired the rights for the drug in 1976. After the patent protection terminated in 2015[28], a number of other companies started production and marketing of nimesulide.