Eslicarbazepine acetate (ESL), sold under the brand names Aptiom and Zebinix among others, is a medication used to treat epilepsy with focal-onset seizures.[1][2] It is taken by mouth.[2] It may be used along or with other anti seizure medications.[5]

Common side effects include dizziness, sleepiness, nausea, headache, double vision, tiredness, poor coordination, blurry vision, and tremor.[2] Other side effects may include suicide, anaphylaxis, low sodium, and liver problems.[2] Safety in pregnancy is unclear.[6] It is a prodrug to (S)-(+)-licarbazepine, similarly to oxcarbazepine; and is beleived to work by inhibiting sodium channels.[6] 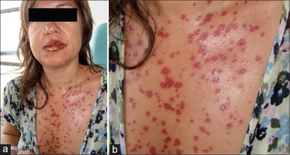 Side effects are similar to oxcarbazepine. The most common ones (more than 10% of patients) are tiredness and dizziness. Other fairly common side effects (1 to 10%) include impaired coordination, gastrointestinal disorders such as diarrhoea, nausea and vomiting, rash (1.1%), and hyponatraemia (low sodium blood levels, 1.2%).[2][8] There may also be an increased risk of suicidal thoughts.[9]

Symptoms of overdosing are similar to adverse effects of standard doses - severe hyponatraemia, somnolence, uncoordinated/unsteady gait, hemiparesis (weakness of one side of the body), along with visual and gastrointestinal disturbances. No specific antidote is available. Eslicarbazepine and metabolites can be dialyzed.[2][8]

Interaction studies have been conducted with a number of common anticonvulsants. Carbamazepine reduces blood plasma concentrations of eslicarbazepine, probably because it induces glucuronidation. This drug combination also increased the risk for diplopia, impaired coordination and dizziness in a clinical study. Phenytoin also reduces eslicarbazepine plasma concentrations, which may be due to increased glucuronidation of eslicarbazepine; and concomitant administration results in an increase in phenytoin serum concentrations, which is probably due to inhibition of CYP2C19.[9] Combinations with lamotrigine, topiramate, valproic acid or levetiracetam showed no significant interactions in studies, although eslicarbazepine has been shown to cause a minor reduction in lamotrigine levels.[8][9]

The active component, eslicarbazepine, has the same mechanism of action as oxcarbazepine (which is a prodrug for licarbazepine, the racemate of eslicarbazepine) and most likely the closely related carbamazepine. It stabilises the inactive state of voltage-gated sodium channels, allowing for less sodium to enter neural cells, which leaves them less excitable.[10][11]According to some sources, it has not been shown conclusively that this is the actual mechanism.[2][8]

Persons with certain genetic variations in human leukocyte antigens (HLAs) are under increased risk of developing skin reactions such as acute generalized exanthematous pustulosis (AGEP), but also severe ones such as Stevens–Johnson and DRESS syndrome, under treatment with carbamazepine and drugs with related chemical structures. This is true for the HLA-A*3101 allele, which occurs in 2 to 5% of Europeans and 10% of Japanese people, and the HLA-B*1502 allele, which is mainly found in people of Asian descent. Theoretically, this may also apply to ESL.[8]

Eslicarbazepine acetate was developed by the Portuguese pharmaceutical company Bial. In early 2009, Bial sold the marketing rights in Europe to the Japanese company Eisai.[13] The drug was approved in the European Union in April 2009 under the trade names Zebinix and Exalief, but was marketed only under the first name.[14][15] In the US it is marketed by Sunovion (formerly Sepracor) and was approved in November 2013.[16]

Studies for the use of ESL as an anticonvulsant for children are under way as of 2016[update].[17]

Like oxcarbazepine, ESL has potential uses for the treatment of trigeminal neuralgia[citation needed] and bipolar disorder. A 2015 assessment showed no statistical difference to placebo for the latter disorder.[18]