Carisoprodol, sold under the brand name Soma among others, is a medication used for musculoskeletal pain.[3] Use is only approved for up to three weeks.[3] Effects generally begin within half an hour and last for up to six hours.[3] It is taken by mouth.[3]

Common side effects include headache, dizziness, and sleepiness.[3] Serious side effect may include addiction, allergic reactions, and seizures.[3] In people with a sulfa allergy certain formulations may result in problems.[3] Safety during pregnancy and breastfeeding is not clear.[4][3] How it works is not clear.[3] Some of its effects are believed to occur following being converted into meprobamate.[3] 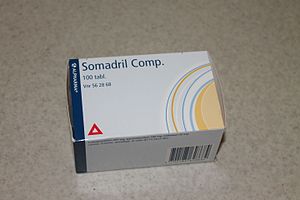 Carisoprodol is meant to be used along with rest, physical therapy and other measure to relax muscles after strains, sprains and muscle injuries.[9] It comes in tablet format and is taken by the mouth three times a day and before bed.[9]

The usual dose of 350 mg is unlikely to engender prominent side effects other than somnolence, and mild to significant euphoria or dysphoria, but the euphoria is generally short-lived due to the fast metabolism of carisoprodol into meprobamate and other metabolites; the euphoria derived is, according to new research, most likely due to carisoprodol's inherent, potent anxiolytic effects that are far stronger than those produced by its primary metabolite, meprobamate, which is often misblamed for the drug-seeking associated with carisoprodol, as carisoprodol itself is responsible for the significantly more intense central nervous system effects than meprobamate alone. Carisoprodol has a unique mechanism of action, qualitatively different from that of meprobamate (Miltown). The medication is well tolerated and without adverse effects in the majority of patients for whom it is indicated. In some patients, however, and/or early in therapy, carisoprodol can have the full spectrum of sedative side effects and can impair the patient's ability to operate a firearm, motor vehicles, and other machinery of various types, especially when taken with medications containing alcohol, in which case an alternative medication would be considered. The intensity of the side effects of carisoprodol tends to lessen as therapy continues, as is the case with many other drugs. Other side effects include: dizziness, clumsiness, headache, fast heart rate, upset stomach, vomiting and skin rash.[9]

The interaction of carisoprodol with essentially all opioids, and other centrally acting analgesics, but especially codeine, those of the codeine-derived subgroup of the semisynthetic class (ethylmorphine, dihydrocodeine, hydrocodone, oxycodone, nicocodeine, benzylmorphine, the various acetylated codeine derivatives including acetyldihydrocodeine, dihydroisocodeine, nicodicodeine and others) which allows the use of a smaller dose of the opioid to have a given effect, is useful in general and especially where skeletal muscle injury and/or spasm is a large part of the problem. The potentiation effect is also useful in other pain situations and is also especially useful with opioids of the open-chain class, such as methadone, levomethadone, ketobemidone, phenadoxone and others. In recreational drug users, deaths have resulted from carelessly combining overdoses of hydrocodone and carisoprodol. Another danger of misuse of carisoprodol and opiates is the potential to aspirate while unconscious.[citation needed]

Carisoprodol is metabolized by the liver and excreted by the kidneys so this drug must be used with caution with patients that have impaired hepatic or renal function.[19] Because of potential for more severe side effects, this drug is on the list to avoid for elderly people.[20]

Carisoprodol, meprobamate, and related drugs such as tybamate, have the potential to produce physical dependence of the barbiturate type following periods of prolonged use. Withdrawal of the drug after extensive use may require hospitalization in medically compromised patients. In severe cases the withdrawal can mimic the symptoms of alcohol withdrawal including the potentially lethal status epilepticus.

Psychological dependence has also been linked to carisoprodol use although this is much less severe than with meprobamate itself (presumably due to the slower onset of effects). Psychological dependence is more common in those who abuse carisoprodol and those who have a history of drug abuse (particularly sedatives or alcohol). It may reach clinical significance before physiological tolerance and dependence have occurred and (as with benzodiazepines) has been demonstrated to persist to varying degrees of severity for months or years after discontinuation.

Discontinuation of carisoprodol, as with all GABA-ergics, can result in cognitive changes which persist for weeks, months, or rarely even years including greatly increased anxiety and depression, social withdrawal, hair-trigger agitation/aggression, chronic insomnia, new or aggravated (often illogical) phobias, reduced IQ, short term and long-term memory loss, and dozens of other sequelae.[21] The effects, severity, and duration appear to be slightly dose-dependent but are mainly determined by the patients pattern of use (taken as prescribed, taken in bulk doses, mixed with other drugs, a combination of the above, etc.), genetic predisposition to drug abuse, and a history of substance abuse all increase the patients risk of persistent discontinuation syndrome symptoms.

Treatment for physical withdrawal generally involves switching the patient to a long-acting benzodiazepine such as diazepam or clonazepam then slowly titrating them off the replacement drug completely at a rate which is both reasonably comfortable for the patient but rapid enough for the managing physician to consider the rate of progress acceptable (overly rapid dose reduction greatly increases the risk of patient non-compliance such as the abuse of illicitly obtained alternative sedatives and/or alcohol). Psychotherapy and cognitive behavioral therapy have demonstrated moderate success in reducing the rebound anxiety which results upon carisoprodol discontinuation but only when combined with regular and active attendance to a substance abuse support group.

Carisoprodol withdrawal can be life-threatening (especially in high dose users and those who attempt to quit "cold turkey"). Medical supervision is recommended, with gradual reduction of dose of carisoprodol or a substituted medication, typical of other depressant drugs.

Combining a muscle relaxant like carisoprodol with opioids and benzodiazepines is referred to as "The Holy Trinity" as it has been reported to increase the power of the "high".[22]

Recreational users of carisoprodol usually seek its potentially heavy sedating, relaxant, and anxiolytic effects.[23] Also, because of its potentiating effects on narcotics, it is often abused in conjunction with many opioid drugs. Also it is not detected on standard drug testing screens. On 26 March 2010 the DEA issued a Notice of Hearing on proposed rule making in respect to the placement of carisoprodol in schedule IV of the Controlled Substances Act.[24] Carisoprodol is sometimes mixed with date rape drugs.[25]

Many overdoses have resulted from recreational users combining these drugs to combine their individual effects without being aware of the enzyme-induction induced potentiation.[medical citation needed]

As with other GABAergic drugs, combination with other GABAergic drugs, including alcohol, as well as with sedatives in general, possess a significant risk to the user in the form of overdose. Overdose symptoms are similar to those of other GABAergics including excessive sedation and unresponsiveness to stimuli, severe ataxia, amnesia, confusion, agitation, intoxication and inappropriate (potentially violent) behavior. Severe overdoses may present with respiratory depression (and subsequent pulmonary aspiration), coma, and death.[citation needed]

Carisoprodol is not detected on all toxicology tests which may delay diagnosis of overdose. Overdose symptoms in combination with opiates are similar but are distinguished by the presentation of normal or pinpoint pupils, which are generally unresponsive to light. Carisoprodol (as with its metabolite meprobamate) is particularly dangerous in combination with alcohol. Flumazenil (the benzodiazepine antidote) is not effective in the management of carisoprodol overdose as carisoprodol acts at the barbiturate binding site. Treatment mirrors that of barbiturate overdoses and is generally supportive, including the administration of mechanical respiration and pressors as implicated (and in rare cases, bemegride). Total amnesia of the experience is not uncommon following recovery.[citation needed]

In 2014 actress Skye McCole Bartusiak died of an overdose due to the combined effects of carisoprodol, hydrocodone and difluoroethane.[26]

Carisoprodol is a GABAergic drug[citation needed].

It is slightly soluble in water and freely soluble in ethanol, chloroform and acetone. The drug's solubility is practically independent of pH.

On 1 June 1959, several American pharmacologists convened at Wayne State University in Detroit, Michigan to discuss a new drug. The drug, originally thought to have antiseptic properties, was found to have central muscle-relaxing properties.[27] It had been developed by Frank Berger at Wallace Laboratories and was named carisoprodol.

Carisoprodol was a modification of meprobamate, intended to have better muscle relaxing properties, less potential for abuse, and less risk of overdose.[28] The substitution of one hydrogen atom with an isopropyl group on one of the carbamyl nitrogens was intended to yield a molecule with new pharmacological properties.

Reports from Norway have shown carisoprodol has abuse potential[29] as a prodrug of meprobamate and/or potentiator of hydrocodone, oxycodone, codeine, and similar drugs. In May 2008 it was taken off the market in Norway.[30]

In the EU, the European Medicines Agency issued a release recommending member states suspend marketing authorization for this product in the treatment of acute (not chronic) back pain.[31]

As of November 2007, carisoprodol has been taken off the market in Sweden due to problems with dependence and side effects. The agency overseeing pharmaceuticals considered other drugs used with the same indications as carisoprodol to have the same or better effects without the risks of the drug.[32]

Carisoprodol is available generically as 350 mg and, more recently, 250 mg tablets. Compounded tablets with acetaminophen and codeine are also available.[34]