Venlafaxine, sold under the brand name Effexor among others, is an antidepressant medication of the serotonin-norepinephrine reuptake inhibitor (SNRI) class.[6] It is used to treat major depressive disorder (MDD), generalized anxiety disorder (GAD), panic disorder, and social phobia.[6] It may also be used for chronic pain.[7] It is taken by mouth.[6]

Common side effects include loss of appetite, constipation, dry mouth, dizziness, sweating, and sexual problems.[6] Severe side effects include an increased risk of suicide, mania, and serotonin syndrome.[6] Antidepressant withdrawal syndrome may occur if stopped.[6] There are concerns that use during the later part of pregnancy can harm the baby.[6] How it works is not entirely clear but it is believed to involve alterations in neurotransmitters in the brain.[6]

Venlafaxine has been used off label for the treatment of diabetic neuropathy and migraine prevention (in some people, however, venlafaxine can exacerbate or cause migraines).[12] It may work on pain via effects on the opioid receptor.[13] It has also been found to reduce the severity of 'hot flashes' in menopausal women and men on hormonal therapy for the treatment of prostate cancer.[14][15]

Due to its action on both the serotoninergic and adrenergic systems, venlafaxine is also used as a treatment to reduce episodes of cataplexy, a form of muscle weakness, in patients with the sleep disorder narcolepsy.[16] Some open-label and three double-blind studies have suggested the efficacy of venlafaxine in the treatment of attention deficit-hyperactivity disorder (ADHD).[17] Clinical trials have found possible efficacy in those with post-traumatic stress disorder (PTSD).[18]

A comparative meta-analysis of 21 major antidepressants found that venlafaxine, agomelatine, amitriptyline, escitalopram, mirtazapine, paroxetine, and vortioxetine were more effective than other antidepressants although the quality of many comparisons was assessed as low or very low.[19][20]

Venlafaxine was similar in efficacy to the atypical antidepressant bupropion; however, the remission rate was lower for venlafaxine.[21] In a double-blind study, patients who did not respond to an SSRI were switched to venlafaxine or citalopram. Similar improvement was observed in both groups.[22]

Studies of venlafaxine in children have not established its efficacy.[23]

Venlafaxine is not recommended in patients hypersensitive to it, nor should it be taken by anyone who is allergic to the inactive ingredients, which include gelatin, cellulose, ethylcellulose, iron oxide, titanium dioxide and hypromellose. It should not be used in conjunction with a monoamine oxidase inhibitor (MAOI), as it can cause potentially fatal serotonin syndrome.[4][5][24]

Venlafaxine can increase eye pressure, so those with glaucoma may require more frequent eye checks.[25]

The US Food and Drug Administration body (FDA) requires all antidepressants, including venlafaxine, to carry a black box warning with a generic warning about a possible suicide risk.

A 2014 meta analysis of 21 clinical trials of venlafaxine for the treatment of depression in adults found that compared to placebo, venlafaxine reduced the risk of suicidal thoughts and behavior.[26]

A study conducted in Finland followed more than 15,000 patients for 3.4 years. Venlafaxine increased suicide risk by 60% (statistically significant), as compared to no treatment. At the same time, fluoxetine (Prozac) halved the suicide risk.[27]

In another study, the data on more than 200,000 cases were obtained from the UK general practice research database. At baseline, patients prescribed venlafaxine had a greater number of risk factors for suicide (such as prior suicide attempts) than patients treated with other anti-depressants. The patients taking venlafaxine had significantly higher risk of completed suicide than the ones on fluoxetine or citalopram (Celexa). After adjusting for known risk factors, venlafaxine was associated with an increased risk of suicide relative to fluoxetine and dothiepin that was not statistically significant. A statistically significant greater risk for attempted suicide remained after adjustment, but the authors concluded that it could be due to residual confounding.[28]

An analysis of clinical trials by the FDA statisticians showed the incidence of suicidal behaviour among the adults on venlafaxine to be not significantly different from fluoxetine or placebo.[29]

Venlafaxine is contraindicated in children, adolescents and young adults. According to the FDA analysis of clinical trials[29] venlafaxine caused a statistically significant 5-fold increase in suicidal ideation and behaviour in persons younger than 25. In another analysis, venlafaxine was no better than placebo among children (7–11 years old), but improved depression in adolescents (12–17 years old). However, in both groups, hostility and suicidal behaviour increased in comparison to those receiving a placebo.[30] In a study involving antidepressants that had failed to produce results in depressed teenagers, teens whose SSRI treatment had failed who were randomly switched to either another SSRI or to venlafaxine showed an increased rate of suicide on venlafaxine. Among teenagers who were suicidal at the beginning of the study, the rate of suicidal attempts and self-harm was significantly higher, by about 60%, after the switch to venlafaxine than after the switch to an SSRI.[31]

The higher risk and increased severity of discontinuation syndrome symptoms relative to other antidepressants may be related to the short half-life of venlafaxine and its active metabolite.[34] After discontinuing venlafaxine, the levels of both serotonin and norepinephrine decrease, leading to the hypothesis that the discontinuation symptoms could result from an overly rapid reduction of neurotransmitter levels.[35]

There are few well-controlled studies of venlafaxine in pregnant women. A study released in May 2010 by the Canadian Medical Association Journal suggests use of venlafaxine doubles the risk of miscarriage.[40][41] Consequently, venlafaxine should only be used during pregnancy if clearly needed.[25] A large case-control study done as part of the National Birth Defects Prevention Study and published in 2012 found a significant association of venlafaxine use during pregnancy and several birth defects including anencephaly, cleft palate, septal heart defects and coarctation of the aorta.[42] Prospective studies have not shown any statistically significant congenital malformations.[43] There have, however, been some reports of self-limiting effects on newborn infants.[44] As with other serotonin reuptake inhibitors (SRIs), these effects are generally short-lived, lasting only 3 to 5 days,[45] and rarely resulting in severe complications.[46]

There have been false positives reported for phencyclidine (PCP), cocaine and amphetamine with routine urine-based drug tests. Although rare these instances typically occur with higher doses of venlafaxine, more than 150 mg per day, when used for extended periods of time.

In rare cases, drug-induced akathisia can occur after use in some people.[50]

Venlafaxine should be used with caution in hypertensive patients. Venlafaxine must be discontinued if significant hypertension persists.[51][52][53] It can also have undesirable cardiovascular effects.[54]

Most patients overdosing with venlafaxine develop only mild symptoms. Plasma venlafaxine concentrations in overdose survivors have ranged from 6 to 24 mg/l, while postmortem blood levels in fatalities are often in the 10–90 mg/l range.[55] Published retrospective studies report that venlafaxine overdosage may be associated with an increased risk of fatal outcome compared to that observed with SSRI antidepressant products, but lower than that for tricyclic antidepressants. Healthcare professionals are advised to prescribe Effexor and Effexor XR in the smallest quantity of capsules consistent with good patient management to reduce the risk of overdose.[56] It is usually reserved as a second-line treatment for depression due to a combination of its superior efficacy to the first-line treatments like fluoxetine, paroxetine and citalopram and greater frequency of side effects like nausea, headache, insomnia, drowsiness, dry mouth, constipation, sexual dysfunction, sweating and nervousness.[19][57]

There is no specific antidote for venlafaxine, and management is generally supportive, providing treatment for the immediate symptoms. Administration of activated charcoal can prevent absorption of the drug. Monitoring of cardiac rhythm and vital signs is indicated. Seizures are managed with benzodiazepines or other anticonvulsants. Forced diuresis, hemodialysis, exchange transfusion, or hemoperfusion are unlikely to be of benefit in hastening the removal of venlafaxine, due to the drug's high volume of distribution.[58]

Venlafaxine indirectly affects opioid receptors as well as the alpha2-adrenergic receptor, and was shown to increase pain threshold in mice. These benefits with respect to pain were reversed with naloxone, an opioid antagonist, thus supporting an opiate mechanism.[68][69]

Venlafaxine is well absorbed, with at least 92% of an oral dose being absorbed into systemic circulation. It is extensively metabolized in the liver via the CYP2D6 isoenzyme to desvenlafaxine (O-desmethylvenlafaxine, now marketed as a separate medication named Pristiq[70]), which is just as potent an SNRI as the parent compound, meaning that the differences in metabolism between extensive and poor metabolisers are not clinically important in terms of efficacy. Side effects, however, are reported to be more severe in CYP2D6 poor metabolisers.[71][72] Steady-state concentrations of venlafaxine and its metabolite are attained in the blood within 3 days. Therapeutic effects are usually achieved within 3 to 4 weeks. No accumulation of venlafaxine has been observed during chronic administration in healthy subjects. The primary route of excretion of venlafaxine and its metabolites is via the kidneys.[25] The half-life of venlafaxine is relatively short, so patients are directed to adhere to a strict medication routine, avoiding missing a dose. Even a single missed dose can result in withdrawal symptoms.[73]

Venlafaxine is a substrate of P-glycoprotein (P-gp), which pumps it out of the brain. The gene encoding P-gp, ABCB1, has the SNP rs2032583, with alleles C and T. The majority of people (about 70% of Europeans and 90% of East Asians) have the TT variant.[74] A 2007 study[75] found that carriers of at least one C allele (variant CC or CT) are 7.72 times more likely than non-carriers to achieve remission after 4 weeks of treatment with amitriptyline, citalopram, paroxetine or venlafaxine (all P-gp substrates). The study included patients with mood disorders other than major depression, such as bipolar II; the ratio is 9.4 if these other disorders are excluded. At the 6-week mark, 75% of C-carriers had remitted, compared to only 38% of non-carriers.[citation needed]

The IUPAC name of venlafaxine is 1-[2-(dimethylamino)-1-(4 methoxyphenyl)ethyl]cyclohexanol, though it is sometimes referred to as (±)-1-[a-[a-(dimethylamino)methyl]-p-methoxybenzyl]cyclohexanol. It consists of two enantiomers present in equal quantities (termed a racemic mixture), both of which have the empirical formula of C17H27NO2. It is usually sold as a mixture of the respective hydrochloride salts, (R/S)-1-[2-(dimethylamino)-1-(4 methoxyphenyl)ethyl]cyclohexanol hydrochloride, C17H28ClNO2, which is a white to off-white crystalline solid. Venlafaxine is structurally and pharmacologically related to the atypical opioid analgesic tramadol, and more distantly to the newly released opioid tapentadol, but not to any of the conventional antidepressant drugs, including tricyclic antidepressants, SSRIs, MAOIs, or RIMAs.[76] 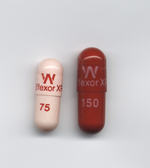