From WikiProjectMed
Jump to navigation Jump to search
Not to be confused with Bupropion/naltrexone.

Buprenorphine, at lower doses, results in the usual opioid effects; however, high doses beyond a certain level do not result in greater effects.[6] This is believed to result in a lower risk of overdose than some other opioids.[6] Naloxone is an opioid antagonist that competes with and blocks the effect of other opioids (including buprenorphine) if given by injection.[3] Naloxone is poorly absorbed when taken by mouth and it is added to decrease the risk that people will misuse the medication by injection.[1] Misuse by injection or use in the nose, however, still occurs.[3] Rates of misuse in the United States appear to be lower than with other opioids.[7] 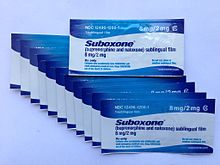 Buprenorphine/naloxone is used for the treatment of opioid use disorder.[14] Long term outcomes are generally better with use of buprenorphine/naloxone than attempts at stopping opioid use altogether.[5] This includes a lower risk of overdose with medication use.[5] Due to the high binding affinity and low activation at the opioid receptor, cravings and withdrawal for opioids are decreased while preventing a person from getting high and relapsing on another opioid. The combination of the two medications is preferred over buprenorphine alone for maintenance treatment due to the presence of naloxone in the formulation, which helps function as an abuse deterrent, especially against intravenous use.[14]

Buprenorphine/naloxone has been found to be effective for treating opioid dependence, and serves as a recommended first line medication according to the U.S. National Institute on Drug Abuse.[15] The medication is an effective maintenance therapy for opioid dependence and has generally similar efficacy to methadone, which are both substantially more effective than abstinence-based treatment.[5][16]

Because it may be prescribed out of an office setting (as opposed to methadone which requires specialized centers), buprenorphine/naloxone allows for more freedom of administration for the person. It also thus comes with more risks in this vulnerable population. Buprenorphine/naloxone may be recommended for socially stable opioid users who may not be able to retrieve medications from a center daily, who may have another condition requiring regular primary care visits, or who may have jobs or daily lives that require they maintain all their faculties and cannot take a sedating medication.[5] Buprenorphine/naloxone is also recommended over methadone in people who may be at high risk of methadone toxicity, such as the elderly, those taking high doses of benzodiazepines or other sedating drugs, concomitant alcohol abusers, those with a lower level of opioid tolerance, and those at high risk of prolonged QT interval. It is also helpful to use the medication in combination with psychosocial support and counseling for the person.[17][18]

Contraindications are severe respiratory or liver impairment and acute alcoholism.[18] There are limited accounts of cross-reactivity with opioids, but there is a possibility.[23] Serious central nervous system (CNS) and respiratory depression may also occur with concurrent use of CNS depressants, ingesting alcohol, or other CNS depressing factors while on buprenorphine/naloxone.

Side effects are similar to those of buprenorphine and other opioids.[18] In addition, naloxone can induce withdrawal symptoms in people who are addicted to opioids.[18] The most common side effects (in order of most common to least common) of sublingual tablets include: headaches, opioid withdrawal syndrome, pain, increased sweating, low blood pressure, and vomiting.[14] The most common side effects seen in film formulations are tongue pain, decreased sensation and redness in the mouth, headache, nausea, vomiting, excessive sweating, constipation, signs and symptoms of opioid withdrawal, sleeping difficulties, pain, and swelling of the extremities.[24]

Buprenorphine/naloxone, when taken in excess, can produce dysphoric symptoms for non opioid-dependent/tolerant individuals due to buprenorphine being a partial opioid agonist. The sublingual formulation of the buprenorphine/naloxone combination was designed to reduce abuse potential via the injection route in comparison to buprenorphine alone. If the combination is taken via the sublingual route, as directed, the addition of naloxone does not diminish the effects of buprenorphine. When the combination sublingual tablet is dissolved and injected by opioid-dependent individuals, a withdrawal effect may be triggered due to the high parenteral bioavailability of naloxone.[26] While this mechanism can potentially act to deter abuse, the Suboxone formulation still has potential to produce an opioid agonist "high" if abused sublingually by non-dependent persons, leading to dependence on opioids.[26][27]

The sedating/narcotic effect of buprenorphine is increased by other sedating drugs such as other opioids, benzodiazepines, first generation antihistamines, alcohol, and antipsychotics. In addition, opioids and especially benzodiazepines increase the risk for potentially lethal respiratory depression.[18]

A theoretical model of activity: buprenorphine/naloxone at opioid receptor when taken sublingually (top) versus when injected intravenously (bottom).

Naloxone is a pure opioid antagonist that competes with opioid molecules in the CNS and prevents them from binding to the opioid receptors.[16] Naloxone's binding affinity is highest for the μ-opioid receptor, then the δ-opioid receptor, and lowest for the κ-opioid receptor.[30] Naloxone has poor bioavailability, and is rapidly inactivated following oral administration.[31] When injected however, it exerts its full effects.

Because of the differing bioavailability between the two medications in this combination, buprenorphine/naloxone works as an abuse deterrent: when taken sublingually as prescribed, the buprenorphine effects at the opioid receptor dominate, while the naloxone effects are negligible due to the low oral absorption. However, when someone attempts to misuse the medication either via injection or inhalation, the naloxone is intended to act as an antagonist and either reduce the euphoric effects of the opioid or even precipitate withdrawal in those currently dependent on opioids.[16] This helps reduce the abuse potential relative to buprenorphine, although it does not eradicate it.[32] One reason that naloxone might have limited efficacy as an abuse deterrent is that buprenorphine binds more tightly to the mu-opioid receptor than naloxone.[32]

Naloxone is extensively inactivated by first-pass metabolism in the liver, meaning that use of buprenorphine/naloxone as prescribed should not lead to active naloxone in the blood (which, as an opioid antagonist, would reverse the effect of buprenorphine or other opioids).

While the cost of the medication buprenorphine/naloxone is greater than buprenorphine alone one analysis predicted the overall costs would be less in the United States due to less risk of abuse.[35]

Before the Drug Addiction Treatment Act of 2000 (DATA), physicians were not allowed to prescribe narcotics to treat opioid dependence. People with narcotic dependence would have to go to registered clinics to receive treatment. With DATA, Suboxone was the first medication approved for office-based treatment for opioid dependence.[36] Suboxone has thus become widely used as a replacement for methadone as it can be prescribed by doctors in their offices, while methadone can only be provided at specialized addiction centers of which there are a limited number, often making access difficult. Some physicians are also leading a movement to begin prescribing it out of the emergency department (ED), as some small studies have shown ED-initiated Suboxone to be effective with people more likely to remain in addiction treatment compared to those either referred to addiction treatment programs or those receiving just a brief intervention in the department.[37][38]

In July 2019, the British company Reckitt Benckiser Group (RB Group) and its current/former affiliated entities (notably Indivior, which split from RB Group in 2014) settled with the US Department of Justice (DOJ) regarding the sale and marketing of brand name Suboxone (buprenorphine/naloxone).[41] The non-prosecution agreement involves RB Group paying up to $1.4 billion, the largest settlement payment in US history involving an opioid-class medication.[41] The case alleged anti-competitive behavior by RB Group and Indivior surrounding the expiration of their regulatory exclusivity for Suboxone sublingual tablets.[42] The DOJ alleged that RB Group and Indivior employed a "product hopping" scheme (when a firm ceases production of a product upon expiration of regulatory exclusivity, in favor of another product that still has regulatory exclusivity, in order to prevent generic manufacturer competition) by misrepresenting that the Suboxone sublingual film formulation was safer than the sublingual tablet formulation because "children are less likely to be accidentally exposed to the film product."[42] This was despite a lack of scientific evidence for that claim.[21] The company also sponsored a complaint to the FDA, expressing concern that buprenorphine/naloxone sublingual tablets (the very product that they formerly produced) was unsafe, requesting that applications for regulatory approval of generic products by other pharmaceutical companies (their competitors) be rejected by the US Food and Drug Administration.[42]