From WikiProjectMed
Jump to navigation Jump to search
Not to be confused with Carbamazine.

Carbamazepine (CBZ), sold under the trade name Tegretol among others, is an anticonvulsant medication used primarily in the treatment of epilepsy and neuropathic pain.[1] It is used in schizophrenia along with other medications and as a second-line agent in bipolar disorder.[4][1] Carbamazepine appears to work as well as phenytoin and valproate for focal and generalized seizures.[5] It is not effective for absence or myoclonic seizures.[1]

Common side effects include nausea and drowsiness.[1] Serious side effects may include skin rashes, decreased bone marrow function, suicidal thoughts, or confusion.[1] It should not be used in those with a history of bone marrow problems.[1] Use during pregnancy may cause harm to the baby; however, stopping the medication in pregnant women with seizures is not recommended.[1] Its use during breastfeeding is not recommended.[1] Care should be taken in those with either kidney or liver problems.[1]

Carbamazepine was discovered in 1953 by Swiss chemist Walter Schindler.[6][7] It was first marketed in 1962.[8] It is available as a generic medication, and none of the forms are expensive.[9] It is on the World Health Organization's List of Essential Medicines.[10] The wholesale cost in the developing world is about US$0.07 to US$0.24 per day as of 2015.[11] In 2017, it was the 176th most commonly prescribed medication in the United States, with more than three million prescriptions.[12][13]

Carbamazepine is typically used for the treatment of seizure disorders and neuropathic pain.[1] It is used off-label as a second-line treatment for bipolar disorder and in combination with an antipsychotic in some cases of schizophrenia when treatment with a conventional antipsychotic alone has failed.[1][14] However, evidence does not support this usage.[15] It is not effective for absence seizures or myoclonic seizures.[1] Although carbamazepine may have a similar effectiveness (people continue on medication) and efficacy (medicine reduces seizure recurrence and improves remission) when compared to phenytoin and valproate the choice of medications should be considered for each person individually as further research is needed to determine which medication is most helpful for people with newly-onset seizures.[5]

In the United States, the FDA-approved medical uses are epilepsy (including partial seizures, generalized tonic-clonic seizures and mixed seizures), trigeminal neuralgia, and manic and mixed episodes of bipolar I disorder.[16]

The drug is also claimed to be effective for ADHD.[17]

As of 2014, a controlled release formulation was available for which there is tentative evidence showing fewer side effects and unclear evidence with regard to whether there is a difference in efficacy.[18]

The defined daily dose of carbamazepine is 1 gram by mouth or rectally.[2] 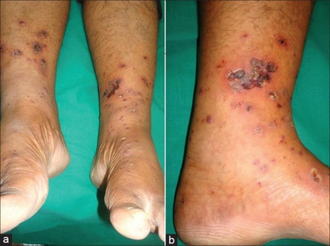 In the US, the label for carbamazepine contains warnings concerning:

Common adverse effects may include drowsiness, dizziness, headaches and migraines, motor coordination impairment, nausea, vomiting, and/or constipation. Alcohol use while taking carbamazepine may lead to enhanced depression of the central nervous system.[3] Less common side effects may include increased risk of seizures in people with mixed seizure disorders,[24] abnormal heart rhythms, blurry or double vision.[3] Also, rare case reports of an auditory side effect have been made, whereby patients perceive sounds about a semitone lower than previously; this unusual side effect is usually not noticed by most people, and disappears after the person stops taking carbamazepine.[25]

Carbamazepine has a potential for drug interactions; caution should be used in combining other medicines with it, including other antiepileptics and mood stabilizers.[16] Lower levels of carbamazepine are seen when administrated with phenobarbital, phenytoin, or primidone, which can result in breakthrough seizure activity. Carbamazepine, as a CYP450 inducer, may increase clearance of many drugs, decreasing their concentration in the blood to subtherapeutic levels and reducing their desired effects.[26] Drugs that are more rapidly metabolized with carbamazepine include warfarin, lamotrigine, phenytoin, theophylline, and valproic acid.[16] Drugs that decrease the metabolism of carbamazepine or otherwise increase its levels include erythromycin,[27] cimetidine, propoxyphene, and calcium channel blockers.[16] Carbamazepine also increases the metabolism of the hormones in birth control pills and can reduce their effectiveness, potentially leading to unexpected pregnancies.[16] As a drug that induces cytochrome P450 enzymes, it accelerates elimination of many benzodiazepines and decreases their action.[28]

Grapefruit juice raises the bioavailability of carbamazepine by inhibiting CYP3A4 enzymes in the gut wall and in the liver.[3] Carbamazepine increases the processing of methadone resulting in lower blood levels.[30]

Serious skin reactions such as Stevens–Johnson syndrome or toxic epidermal necrolysis due to carbamazepine therapy are more common in people with a particular human leukocyte antigen allele, HLA-B*1502.[3] Odds ratios for the development of Stevens-Johnson syndrome or toxic epidermal necrolysis (SJS/TEN) in people who carry the allele can be in the double, triple or even quadruple digits, depending on the population studied.[31][32] HLA-B*1502 occurs almost exclusively in people with ancestry across broad areas of Asia, but has a very low or absent frequency in European, Japanese, Korean and African populations.[3][33] However, the HLA-A*31:01 allele has been shown to be a strong predictor of both mild and severe adverse reactions, such as the DRESS syndrome form of severe cutaneous reactions, to carbamazepine among Japanese, Chinese, Korean, and Europeans.[32][34] It is suggested that carbamazepine acts as a potent antigen that binds to the antigen-presenting area of HLA-B*1502 alike, triggering an everlasting activation signal on immature CD8-T cells, thus resulting in widespread cytotoxic reactions like SJS/TEN.[35]

Carbamazepine is a sodium channel blocker.[37] It binds preferentially to voltage-gated sodium channels in their inactive conformation, which prevents repetitive and sustained firing of an action potential. Carbamazepine has effects on serotonin systems but the relevance to its antiseizure effects is uncertain. There is evidence that it is a serotonin releasing agent and possibly even a serotonin reuptake inhibitor.[38][39][40]

Carbamazepine was discovered by chemist Walter Schindler at J.R. Geigy AG (now part of Novartis) in Basel, Switzerland, in 1953.[41][42] It was first marketed as a drug to treat epilepsy in Switzerland in 1963 under the brand name "Tegretol"; its use for trigeminal neuralgia (formerly known as tic douloureux) was introduced at the same time.[41] It has been used as an anticonvulsant and antiepileptic in the UK since 1965, and has been approved in the US since 1968.[1]

In 1971, Drs. Takezaki and Hanaoka first used carbamazepine to control mania in patients refractory to antipsychotics (lithium was not available in Japan at that time). Dr. Okuma, working independently, did the same thing with success. As they were also epileptologists, they had some familiarity with the antiaggression effects of this drug. Carbamazepine was studied for bipolar disorder throughout the 1970s.[43] 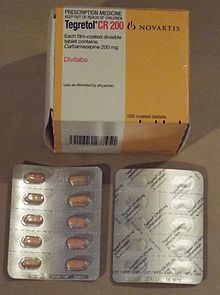 Carbamazepine and its (bio-)transformation products have been detected in wastewater treatment plant effluent[44]: 224  and in streams receiving treated wastewater.[45] Field and laboratory studies have been conducted to understand the accumulation of carbamazepine in food plants grown in soil treated with sludge, which vary with respect to the concentrations of carbamazepine present in sludge and in the concentrations of sludge in the soil; taking into account only studies that used concentrations normally found, a 2014 review found that "the accumulation of carbamazepine into plants grown in soil amended with biosolids poses a de minimis risk to human health according to the approach."[44]: 227

Carbamazepine is available worldwide under many brand names including Tegretol.[46]