Atomoxetine, sold under the brand name Strattera, among others, is a medication used to treat attention deficit hyperactivity disorder (ADHD).[8] It may be used alone or along with stimulants.[9][10] Use of atomoxetine is only recommended for those who are at least six years old.[8] It is taken by mouth.[8]

Common side effects of atomoxetine include abdominal pain, loss of appetite, nausea, feeling tired, and dizziness.[8] Serious side effects may include angioedema, liver problems, stroke, psychosis, heart problems, suicide, and aggression.[8][11] Its safety for use during pregnancy and breastfeeding is not yet certain.[12] Atomoxetine is a norepinephrine reuptake inhibitor and is believed to work by increasing norepinephrine and dopamine levels in the brain.[8][6]

Atomoxetine is approved for use in children, adolescents, and adults.[16] However, its efficacy has not been studied in children under six years old.[4] Its primary advantage over the standard stimulant treatments for ADHD is that it has little known abuse potential.[4] While it has been shown to significantly reduce inattentive and hyperactive symptoms, the responses were lower than the response to stimulants. Additionally, 40% of participants who were treated with atomoxetine experienced residual ADHD symptoms.[17]

Unlike α2 adrenoceptor agonists such as guanfacine and clonidine, atomoxetine's use can be abruptly stopped without significant discontinuation effects being seen.[4]

Atomoxetine may be used in those with ADHD and bipolar disorder although such use has not been well studied.[22] Some benefit has also been seen in people with ADHD and autism.[23]

Common side effects include abdominal pain, loss of appetite, nausea, feeling tired, and dizziness.[8] Serious side effects may include angioedema, liver problems, stroke, psychosis, heart problems, suicide, and aggression.[8][11] Safety in pregnancy and breastfeeding is not clear.[12]

The U.S. Food and Drug Administration (FDA) has issued a black box warning for suicidal behaviour/ideation.[5] Similar warnings have been issued in Australia.[4][24] Unlike stimulant medications, atomoxetine does not have abuse liability or the potential to cause withdrawal effects on abrupt discontinuation.[4]

Atomoxetine is relatively non-toxic in overdose. Single-drug overdoses involving over 1500 mg of atomoxetine have not resulted in death.[4] The most common symptoms of overdose include:[4]

The recommended treatment for atomoxetine overdose includes use of activated charcoal to prevent further absorption of the drug.[4]

Atomoxetine has been found to directly inhibit hERG potassium currents with an IC50 of 6.3 μM, which has the potential to cause arrhythmia.[29][31] QT prolongation has been reported with atomoxetine at therapeutic doses and in overdose; it is suggested that atomoxetine not be used with other medications that may prolong the QT interval, concomitantly with CYP2D6 inhibitors, and caution to be used in poor metabolizers.[29]

Other notable drug interactions include:[4]

Atomoxetine inhibits the presynaptic norepinephrine transporter (NET), preventing the reuptake of norepinephrine throughout the brain along with inhibiting the reuptake of dopamine in specific brain regions such as the prefrontal cortex, where dopamine transporter (DAT) expression is minimal.[6] In rats, atomoxetine increased prefrontal cortex catecholamine concentrations without altering dopamine levels in the striatum or nucleus accumbens; in contrast, methylphenidate, a dopamine reuptake inhibitor, was found to increase prefrontal, striatal, and accumbal dopamine levels to the same degree.[35] In mice, atomoxetine was also found to increase prefrontal catecholamine levels without affecting striatal or accumbal levels.[37]

Atomoxetine's status as a serotonin transporter (SERT) inhibitor at clinical doses in humans is uncertain. A PET imaging study on rhesus monkeys found that atomoxetine occupied >90% and >85% of neural NET and SERT, respectively.[38] However, both mouse and rat microdialysis studies have failed to find an increase in extracellular serotonin in the prefrontal cortex following acute or chronic atomoxetine treatment.[35][37] Supporting atomoxetine's selectivity, a human study found no effects on platelet serotonin uptake (a marker of SERT inhibition) and inhibition of the pressor effects of tyramine (a marker of NET inhibition).[39]

Atomoxetine has been found to act as an NMDA receptor antagonist in rat cortical neurons at therapeutic concentrations.[40][41] It causes a use-dependent open-channel block and its binding site overlaps with the Mg2+ binding site.[40][41] Atomoxetine's ability to increase prefrontal cortex firing rate in anesthetized rats could not be blocked by D1 or α2-adrenergic receptor antagonists, but could be potentiated by NMDA or an α1-adrenergic receptor antagonist, suggesting a glutaminergic mechanism.[42] In Sprague Dawley rats, atomoxetine reduces NR2B protein content without altering transcript levels.[43] Aberrant glutamate and NMDA receptor function have been implicated in the etiology of ADHD.[44][45]

Atomoxetine also reversibly inhibits GIRK currents in Xenopus oocytes in a concentration-dependent, voltage-independent, and time-independent manner.[46] Kir3.1/3.2 ion channels are opened downstream of M2, α2, D2, and A1 stimulation, as well as other Gi-coupled receptors.[46] Therapeutic concentrations of atomoxetine are within range of interacting with GIRKs, especially in CYP2D6 poor metabolizers.[46] It is not known whether this contributes to the therapeutic effects of atomoxetine in ADHD.

Orally administered atomoxetine is rapidly and completely absorbed.[6] First-pass metabolism by the liver is dependent on CYP2D6 activity, resulting in an absolute bioavailability of 63% for extensive metabolizers and 94% for poor metabolizers.[6] Maximum plasma concentration is reached in 1–2 hours.[6] If taken with food, the maximum plasma concentration decreases by 10-40% and delays the tmax by 1 hour.[6] Drugs affecting gastric pH have no effect on oral bioavailability.[16]

The half-life of atomoxetine varies widely between individuals, with an average range of 4.5 to 19 hours.[6][7] As atomoxetine is metabolized by CYP2D6, exposure may be increased 10-fold in CYP2D6 poor metabolizers.[7] 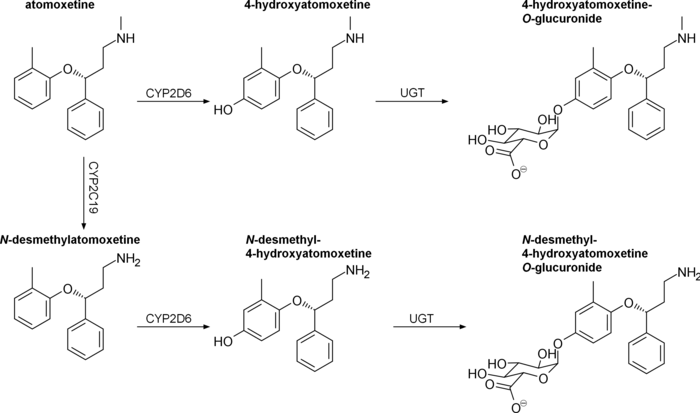 Major metabolites of atomoxetine in humans.[6]

Atomoxetine, or (−)-methyl[(3R)-3-(2-methylphenoxy)-3-phenylpropyl]amine, is a white, granular powder that is highly soluble in water.

Original synthesis of atomoxetine, as patented by Eli Lilly and Company[47][48]

Atomoxetine may be quantitated in plasma, serum or whole blood in order to distinguish extensive versus poor metabolizers in those receiving the drug therapeutically, to confirm the diagnosis in potential poisoning victims or to assist in the forensic investigation in a case of fatal overdosage.[49]

Atomoxetine is manufactured, marketed, and sold in the United States as the hydrochloride salt (atomoxetine HCl) under the brand name Strattera by Eli Lilly and Company, the original patent-filing company and current U.S. patent owner. Atomoxetine was initially intended to be developed as an antidepressant, but it was found to be insufficiently efficacious for treating depression. It was, however, found to be effective for ADHD and was approved by the FDA in 2002, for the treatment of ADHD. Its patent expired in May 2017.[50] On 12 August 2010, Lilly lost a lawsuit that challenged its patent on Strattera, increasing the likelihood of an earlier entry of a generic into the US market.[51] On 1 September 2010, Sun Pharmaceuticals announced it would begin manufacturing a generic in the United States.[52] In a 29 July 2011 conference call, however, Sun Pharmaceutical's Chairman stated "Lilly won that litigation on appeal so I think [generic Strattera]'s deferred."[53]

In 2017 the FDA approved the generic production of atomoxetine by four pharmaceutical companies.[54]

There has been some suggestion that atomoxetine might be a helpful adjunct in people with major depression, particularly in cases with concomitant ADHD.[55]

Atomoxetine may improve working memory and attention when used at certain doses.[55]