Kidney failure, also known as end-stage kidney disease, is a medical condition in which the kidneys are functioning at less than 15% of normal.[2] Kidney failure is classified as either acute kidney failure, which develops rapidly and may resolve; and chronic kidney failure, which develops slowly and is often be irreversible.[6] Symptoms may include leg swelling, feeling tired, vomiting, loss of appetite, and confusion.[2] Complications of acute and chronic failure include uremia, high blood potassium, and volume overload.[3] Complications of chronic failure also include heart disease, high blood pressure, and anemia.[4][5]

Causes of acute kidney failure include low blood pressure, blockage of the urinary tract, certain medications, muscle breakdown, and hemolytic uremic syndrome.[6] Causes of chronic kidney failure include diabetes, high blood pressure, nephrotic syndrome, and polycystic kidney disease.[6] Diagnosis of acute failure is often based on a combination of factors such as decrease urine production or increased serum creatinine.[3] Diagnosis of chronic failure is based on a glomerular filtration rate (GFR) of less than 15 or the need for renal replacement therapy.[1] It is also equivalent to stage 5 chronic kidney disease.[1]

Treatment of acute failure depends on the underlying cause.[7] Treatment of chronic failure may include hemodialysis, peritoneal dialysis, or a kidney transplant.[2] Hemodialysis uses a machine to filter the blood outside the body.[2] In peritoneal dialysis specific fluid is placed into the abdominal cavity and then drained, with this process being repeated multiple times per day.[2] Kidney transplantation involves surgically placing a kidney from someone else and then taking immunosuppressant medication to prevent rejection.[2] Other recommended measures from chronic disease include staying active and specific dietary changes.[2]

Acute kidney injury (AKI), previously called acute renal failure (ARF),[10][11] is a rapidly progressive loss of renal function,[12] generally characterized by oliguria (decreased urine production, quantified as less than 400 mL per day in adults,[13] less than 0.5 mL/kg/h in children or less than 1 mL/kg/h in infants); and fluid and electrolyte imbalance. AKI can result from a variety of causes, generally classified as prerenal, intrinsic, and postrenal. Many people diagnosed with paraquat intoxication experience AKI, sometimes requiring hemodialysis.[citation needed] The underlying cause must be identified and treated to arrest the progress, and dialysis may be necessary to bridge the time gap required for treating these fundamental causes. 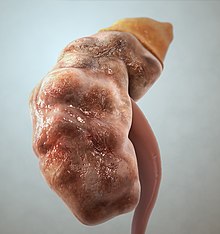 Illustration of a kidney from a person with chronic renal failure

Chronic kidney disease (CKD) can also develop slowly and, initially, show few symptoms.[14] CKD can be the long term consequence of irreversible acute disease or part of a disease progression.

Acute kidney injuries can be present on top of chronic kidney disease, a condition called acute-on-chronic kidney failure (AoCRF). The acute part of AoCRF may be reversible, and the goal of treatment, as with AKI, is to return the person to baseline kidney function, typically measured by serum creatinine. Like AKI, AoCRF can be difficult to distinguish from chronic kidney disease if the person has not been monitored by a physician and no baseline (i.e., past) blood work is available for comparison.

Symptoms can vary from person to person. Someone in early stage kidney disease may not feel sick or notice symptoms as they occur. When the kidneys fail to filter properly, waste accumulates in the blood and the body, a condition called azotemia. Very low levels of azotaemia may produce few, if any, symptoms. If the disease progresses, symptoms become noticeable (if the failure is of sufficient degree to cause symptoms). Kidney failure accompanied by noticeable symptoms is termed uraemia.[15]

Acute kidney injury (previously known as acute renal failure) – or AKI – usually occurs when the blood supply to the kidneys is suddenly interrupted or when the kidneys become overloaded with toxins. Causes of acute kidney injury include accidents, injuries, or complications from surgeries in which the kidneys are deprived of normal blood flow for extended periods of time. Heart-bypass surgery is an example of one such procedure.

Drug overdoses, accidental or from chemical overloads of drugs such as antibiotics or chemotherapy, along with bee stings[22] may also cause the onset of acute kidney injury. Unlike chronic kidney disease, however, the kidneys can often recover from acute kidney injury, allowing the person with AKI to resume a normal life. People suffering from acute kidney injury require supportive treatment until their kidneys recover function, and they often remain at increased risk of developing future kidney failure.[23]

Among the accidental causes of renal failure is the crush syndrome, when large amounts of toxins are suddenly released in the blood circulation after a long compressed limb is suddenly relieved from the pressure obstructing the blood flow through its tissues, causing ischemia. The resulting overload can lead to the clogging and the destruction of the kidneys. It is a reperfusion injury that appears after the release of the crushing pressure. The mechanism is believed to be the release into the bloodstream of muscle breakdown products – notably myoglobin, potassium, and phosphorus – that are the products of rhabdomyolysis (the breakdown of skeletal muscle damaged by ischemic conditions). The specific action on the kidneys is not fully understood, but may be due in part to nephrotoxic metabolites of myoglobin.

Chronic kidney failure has numerous causes. The most common causes of chronic failure are diabetes mellitus and long-term, uncontrolled hypertension.[24] Polycystic kidney disease is another well-known cause of chronic failure. The majority of people afflicted with polycystic kidney disease have a family history of the disease. Other genetic illnesses cause kidney failure, as well.

Overuse of common drugs such as ibuprofen, and acetaminophen (paracetamol) can also cause chronic kidney failure.[25]

Some infectious disease agents, such as hantavirus, can attack the kidneys, causing kidney failure.[26]

The APOL1 gene has been proposed as a major genetic risk locus for a spectrum of nondiabetic renal failure in individuals of African origin, these include HIV-associated nephropathy (HIVAN), primary nonmonogenic forms of focal segmental glomerulosclerosis, and hypertension affiliated chronic kidney disease not attributed to other etiologies.[27] Two western African variants in APOL1 have been shown to be associated with end stage kidney disease in African Americans and Hispanic Americans.[28][29]

Chronic kidney failure is measured in five stages, which are calculated using the person's GFR, or glomerular filtration rate. Stage 1 CKD is mildly diminished renal function, with few overt symptoms. Stages 2 and 3 need increasing levels of supportive care from their medical providers to slow and treat their renal dysfunction. People with stage 4 and 5 kidney failure usually require preparation towards active treatment in order to survive. Stage 5 CKD is considered a severe illness and requires some form of renal replacement therapy (dialysis) or kidney transplant whenever feasible.

A normal GFR varies according to many factors, including sex, age, body size and ethnic background. Renal professionals consider the glomerular filtration rate (GFR) to be the best overall index of kidney function.[30] The National Kidney Foundation offers an easy to use on-line GFR calculator[31] for anyone who is interested in knowing their glomerular filtration rate. (A serum creatinine level, a simple blood test, is needed to use the calculator.)

Use of the term uremia

Before the advancement of modern medicine, renal failure was often referred to as uremic poisoning. Uremia was the term for the contamination of the blood with urea. It is the presence of an excessive amount of urea in blood. Starting around 1847, this included reduced urine output, which was thought to be caused by the urine mixing with the blood instead of being voided through the urethra.[citation needed] The term uremia is now used for the illness accompanying kidney failure.[32]

The treatment of acute kidney injury depends on the cause.[7] The treatment of chronic kidney failure may include renal replacement therapy: hemodialysis, peritoneal dialysis, or kidney transplant[2]

People who receive earlier referrals to a nephrology specialist, meaning a longer time before they must start dialysis, have a shorter initial hospitalization and reduced risk of death after the start of dialysis.[36] Other methods of reducing disease progression include minimizing exposure to nephrotoxins such as NSAIDs and intravenous contrast.[37]