From WikiProjectMed
Jump to navigation Jump to search
This article is about the left handed version of the medication. For its racemic form, see citalopram.

Escitalopram, sold under the brand names Cipralex and Lexapro, among others, is an antidepressant of the selective serotonin reuptake inhibitor (SSRI) class.[3] Escitalopram is mainly used to treat major depressive disorder or generalized anxiety disorder.[3] It is taken by mouth.[3]

Common side effects include trouble sleeping, nausea, sexual problems, and feeling tired.[3] More serious side effects may include suicide in people under the age of 25.[3] It is unclear if use during pregnancy or breastfeeding is safe.[4] Escitalopram is the (S)-stereoisomer (left-handed version) of citalopram (which is a mixture of both right and left handed), hence the name escitalopram.[3]

Escitalopram was approved by regulatory authorities for the treatment of major depressive disorder on the basis of four placebo controlled, double-blind trials, three of which demonstrated a statistical superiority over placebo.[13]

Controversy existed regarding the effectiveness of escitalopram compared with its predecessor, citalopram. The importance of this issue followed from the greater cost of escitalopram relative to the generic mixture of isomers of citalopram, prior to the expiration of the escitalopram patent in 2012, which led to charges of evergreening. Accordingly, this issue has been examined in at least 10 different systematic reviews and meta analyses. As of 2012[update], reviews had concluded (with caveats in some cases) that escitalopram is modestly superior to citalopram in efficacy and tolerability.[14][15][16][17]

A 2011 review concluded that second-generation antidepressants appear equally effective, although they may differ in onset and side effects.[18] Treatment guidelines issued by the National Institute of Health and Clinical Excellence and by the American Psychiatric Association generally reflect this viewpoint.[19][20]

In 2018, a systematic review and network meta-analysis comparing the efficacy and acceptability of 21 antidepressant drugs showed escitalopram to be one of the most effective.[21]

Escitalopram appears to be effective in treating general anxiety disorder, with relapse on escitalopram at 20% rather than placebo at 50%.[22]

Escitalopram is effective in reducing the symptoms of premenstrual syndrome, whether taken continuously or in the luteal phase only.[24] There are no good data available for escitalopram as treatment for seasonal affective disorder as of 2011[update].[25] SSRIs do not appear to be useful for preventing tension headaches or migraines.[26][27]

Escitalopram, like other SSRIs, has been shown to affect sexual functions causing side effects such as decreased libido, delayed ejaculation, and anorgasmia.[28][29]

An analysis conducted by the FDA found a statistically insignificant 1.5 to 2.4-fold (depending on the statistical technique used) increase of suicidality among the adults treated with escitalopram for psychiatric indications.[30][31][32] The authors of a related study note the general problem with statistical approaches: due to the rarity of suicidal events in clinical trials, it is hard to draw firm conclusions with a sample smaller than two million patients.[33]

Escitalopram is not associated with weight gain. For example, 0.6 kg mean weight change after 6 months of treatment with escitalopram for depression was insignificant and similar to that with placebo (0.2 kg).[34]

Citalopram and escitalopram are associated with dose-dependent QT interval prolongation[35] and should not be used in those with congenital long QT syndrome or known pre-existing QT interval prolongation, or in combination with other medicines that prolong the QT interval. ECG measurements should be considered for patients with cardiac disease, and electrolyte disturbances should be corrected before starting treatment. In December 2011, the UK implemented new restrictions on the maximum daily doses at 20 mg for adults and 10 mg for those older than 65 years or with liver impairment.[36][37] There are concerns of higher rates of QT prolongation and torsades de pointes compared with other SSRIs.[38][39] The U.S. Food and Drug Administration and Health Canada did not similarly order restrictions on escitalopram dosage, only on its predecessor citalopram.[40]

The most common effect is fatigue or somnolence, particularly in older adults, although patients with pre-existing daytime sleepiness and fatigue may experience paradoxical improvement of these symptoms.[45] Escitalopram has not been shown to affect serial reaction time, logical reasoning, serial subtraction, multitask, or MacWorth clock task performance.[46]

Some people experience persistent sexual side effects after they stop taking SSRIs.[49] This is known as post-SSRI sexual dysfunction (PSSD). Common symptoms include genital anesthesia, erectile dysfunction, anhedonia, decreased libido, premature ejaculation, vaginal lubrication issues, and nipple insensitivity in women. Rates are unknown, and there is no established treatment.[50]

Antidepressant exposure (including escitalopram) is associated with shorter duration of pregnancy (by three days), increased risk of preterm delivery (by 55%), lower birth weight (by 75 g), and lower Apgar scores (by <0.4 points). Antidepressant exposure is not associated with an increased risk of spontaneous abortion.[51] There is a tentative association of SSRI use during pregnancy with heart problems in the baby.[52] The advantages of their use during pregnancy may thus outweigh the possible negative effects on the baby.[52]

Excessive doses of escitalopram usually cause relatively minor untoward effects, such as agitation and tachycardia. However, dyskinesia, hypertonia, and clonus may occur in some cases. Therapeutic blood levels of escitalopram are usually in the range of 20–80 μg/L but may reach 80–200 μg/L in the elderly, patients with hepatic dysfunction, those who are poor CYP2C19 metabolizers or following acute overdose. Monitoring of the drug in plasma or serum is generally accomplished using chromatographic methods. Chiral techniques are available to distinguish escitalopram from its racemate, citalopram.[53][54][55] Escitalopram seems to be less dangerous than citalopram in overdose and comparable to other SSRIs.[56]

Escitalopram increases intrasynaptic levels of the neurotransmitter serotonin by blocking the reuptake of the neurotransmitter into the presynaptic neuron. Of the SSRIs currently available, escitalopram has the highest selectivity for the serotonin transporter (SERT) compared to the norepinephrine transporter (NET), making the side-effect profile relatively mild in comparison to less-selective SSRIs.[58]

Escitalopram, similarly to other SSRIs, inhibits CYP2D6 and hence may increase plasma levels of a number of CYP2D6 substrates such as aripiprazole, risperidone, tramadol, codeine, etc. As escitalopram is only a weak inhibitor of CYP2D6, analgesia from tramadol may not be affected.[60] Escitalopram should be taken with caution when using St. John's wort.[61] Exposure to escitalopram is increased moderately, by about 50%, when it is taken with omeprazole. The authors of this study suggested that this increase is unlikely to be of clinical concern.[62] Caution should be used when taking cough medicine containing dextromethorphan (DXM) as serotonin syndrome has been reported.[63]

Bupropion has been found to significantly increase citalopram plasma concentration and systemic exposure; as of April 2018[update] the interaction with escitalopram had not been studied, but some monographs warned of the potential interaction.[64]

Escitalopram can also prolong the QT interval and hence it is not recommended in patients that are concurrently on other medications that also have the ability to prolong the QT interval. These drugs include antiarrhythmics, antipsychotics, tricyclic antidepressants, some antihistamines (astemizole, mizolastine) and some antiretrovirals (ritonavir, saquinavir, lopinavir).[36] Being an SSRI, escitalopram should not be given concurrently with MAOIs or other serotonergic medications.[58] 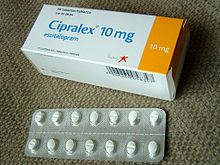 Escitalopram was developed in close cooperation between Lundbeck and Forest Laboratories. Its development was initiated in the summer of 1997, and the resulting new drug application was submitted to the U.S. FDA in March 2001. The short time (3.5 years) it took to develop escitalopram can be attributed to the previous extensive experience of Lundbeck and Forest with citalopram, which has similar pharmacology.[65]

The FDA issued the approval of escitalopram for major depression in August 2002 and for generalized anxiety disorder in December 2003. On May 23, 2006, the FDA approved a generic version of escitalopram by Teva.[66] On July 14 of that year, however, the U.S. District Court of Delaware decided in favor of Lundbeck regarding the patent infringement dispute and ruled the patent on escitalopram valid.[67]

In 2006, Forest Laboratories was granted an 828-day (2 years and 3 months) extension on its US patent for escitalopram.[68] This pushed the patent expiration date from December 7, 2009 to September 14, 2011. Together with the 6-month pediatric exclusivity, the final expiration date was March 14, 2012.

In the United States the wholesale cost is about $2.04 per month as of 2017[update].[5] In the United Kingdom, as of 2018[update], generic escitalopram is around 1/20th as costly as the proprietary version.[6] In 2017, it was the 20th most commonly prescribed medication in the United States with more than 25 million prescriptions.[8][9]

In 2004, separate civil suits alleging illegal marketing of citalopram and escitalopram for use by children and teenagers by Forest were initiated by two whistleblowers: a physician named Joseph Piacentile and a Forest salesman named Christopher Gobble.[69] In February 2009, the suits were joined. Eleven states and the District of Columbia filed notices of intent to intervene as plaintiffs in the action.

The suits alleged that Forest illegally engaged in off-label promotion of Lexapro for use in children; hid the results of a study showing lack of effectiveness in children; paid kickbacks to physicians to induce them to prescribe Lexapro to children; and conducted so-called "seeding studies" that were, in reality, marketing efforts to promote the drug's use by doctors.[70][71] Forest denied the allegations[72] but ultimately agreed to settle with the plaintiffs for over $313 million.[73]

Escitalopram is sold under many brand names worldwide such as Cipralex and Lexapro.[1]