A gallstone is a stone formed within the gallbladder out of bile components.[2] The term cholelithiasis may refer to the presence of gallstones or to any disease caused by gallstones.[5] Most people with gallstones (about 80%) never have symptoms.[2][3] However, if a gallstone blocks the bile duct, a cramp-like pain in the right upper part of the abdomen, known as biliary colic (gallbladder attack) can result.[4] This happens in 1–4% of those with gallstones each year.[4] Complications of gallstones may include inflammation of the gallbladder (cholecystitis), inflammation of the pancreas (pancreatitis), jaundice, and infection of a bile duct (cholangitis).[4][6] Symptoms of these complications may include pain of more than five hours duration, fever, yellowish skin, vomiting, dark urine, and pale stools.[2]

Risk factors for gallstones include birth control pills, pregnancy, a family history of gallstones, obesity, diabetes, liver disease, or rapid weight loss.[2] The bile components that form gallstones include cholesterol, bile salts, and bilirubin.[2] Gallstones formed mainly from cholesterol are termed cholesterol stones, and those mainly from bilirubin are termed pigment stones.[2][3] Gallstones may be suspected based on symptoms.[4] Diagnosis is then typically confirmed by ultrasound.[2] Complications may be detected on blood tests.[2]

The risk of gallstones may be decreased by maintaining a healthy weight with exercise and a healthy diet.[2] If there are no symptoms, treatment is usually not needed.[2] In those who are having gallbladder attacks, surgery to remove the gallbladder is typically recommended.[2] This can be carried out either through several small incisions or through a single larger incision, usually under general anesthesia.[2] In rare cases when surgery is not possible, medication can be used to dissolve the stones or lithotripsy to break them down.[7]

In developed countries, 10–15% of adults have gallstones.[4] Rates in many parts of Africa, however, are as low as 3%.[8] Gallbladder and biliary related diseases occurred in about 104 million people (1.6% of people) in 2013 and they resulted in 106,000 deaths.[9][10] Women more commonly have stones than men and they occur more commonly after the age of 40.[2] Certain ethnic groups have gallstones more often than others.[2] For example, 48% of Native Americans have gallstones.[2] Once the gallbladder is removed, outcomes are generally good.[2]

Gallstone disease refers to the condition where gallstones are either in the gallbladder or common bile duct.[5] The presence of stones in the gallbladder is referred to as cholelithiasis, from the Greek chol- (bile) + lith- (stone) + -iasis (process).[1] Presence of gallstones in the common bile duct is called choledocholithiasis, from the Greek chol- (bile) + docho- (duct) + lith- (stone) + iasis- (process).[1] Choledocholithiasis is frequently associated with obstruction of the bile ducts, which in turn can lead to cholangitis, from the Greek: chol- (bile) + ang- (vessel) + itis- (inflammation), a serious infection of the bile ducts. Gallstones within the ampulla of Vater can obstruct the exocrine system of the pancreas, which in turn can result in pancreatitis.

Gallstones, regardless of size or number,[11] may be asymptomatic, even for years. Such "silent stones" do not require treatment.[12][13] A characteristic symptom of a gallstone attack is the presence of colicky pain in the upper-right side of the abdomen, often accompanied by nausea and vomiting. The pain steadily increases for approximately 30 minutes to several hours. A person may also experience referred pain between the shoulder blades or below the right shoulder. Often, attacks occur after a particularly fatty meal and almost always happen at night, and after drinking.

In addition to pain, nausea, and vomiting, a person may experience a fever. If the stones block the duct and cause bilirubin to leak into the bloodstream and surrounding tissue, there may also be jaundice and itching. If this is the case, the liver enzymes are likely to be raised.[14]

Rarely, gallstones in cases of severe inflammation may erode through the gallbladder into adherent bowel potentially causing an obstruction termed gallstone ileus.[15]

Other complications include ascending cholangitis if there is a bacterial infection which can cause purulent inflammation in the biliary tree and liver, and acute pancreatitis as blockage of the bile ducts can prevent active enzymes being secreted into the bowel, instead damaging the pancreas.[14] Rarely gallbladder cancer may occur as a complication.[6]

Gallstone risk increases for females (especially before menopause) and for people near or above 40 years;[16] the condition is more prevalent among both North and South Americans[clarification needed] and people of European descent than among other ethnicities. A lack of melatonin could significantly contribute to gallbladder stones, as melatonin inhibits cholesterol secretion from the gallbladder, enhances the conversion of cholesterol to bile, and is an antioxidant, which is able to reduce oxidative stress to the gallbladder.[17] Researchers believe that gallstones may be caused by a combination of factors, including inherited body chemistry, body weight, gallbladder motility (movement), and low-calorie diet.[citation needed] The absence of such risk factors does not, however, preclude the formation of gallstones.

Nutritional factors that may increase risk of gallstones include constipation; eating fewer meals per day; low intake of the nutrients folate, magnesium, calcium, and vitamin C;[18] low fluid consumption;[19] and, at least for men, a high intake of carbohydrate, a high glycemic load, and high glycemic index diet.[20] Wine and whole-grained bread may decrease the risk of gallstones.[21]

Pigment gallstones are most commonly seen in the developing world. Risk factors for pigment stones include hemolytic anemias (such as from sickle-cell disease and hereditary spherocytosis), cirrhosis, and biliary tract infections.[25] People with erythropoietic protoporphyria (EPP) are at increased risk to develop gallstones.[26][27] Additionally, prolonged use of proton pump inhibitors has been shown to decrease gallbladder function, potentially leading to gallstone formation.[28]

Cholesterol modifying medications can affect gallstone formation. Statins inhibit cholesterol synthesis and there is evidence that their use may decrease the risk of getting gallstones.[29][30] Fibrates increase cholesterol concentration in bile and their use has been associated with an increased risk of gallstones.[30] Bile acid malabsorption may also be a risk.

Cholesterol gallstones develop when bile contains too much cholesterol and not enough bile salts. Besides a high concentration of cholesterol, two other factors are important in causing gallstones. The first is how often and how well the gallbladder contracts; incomplete and infrequent emptying of the gallbladder may cause the bile to become overconcentrated and contribute to gallstone formation. This can be caused by high resistance to the flow of bile out of the gallbladder due to the complicated internal geometry of the cystic duct.[31] The second factor is the presence of proteins in the liver and bile that either promote or inhibit cholesterol crystallization into gallstones. In addition, increased levels of the hormone estrogen, as a result of pregnancy or hormone therapy, or the use of combined (estrogen-containing) forms of hormonal contraception, may increase cholesterol levels in bile and also decrease gallbladder motility, resulting in gallstone formation. 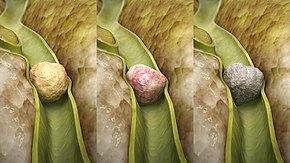 The composition of gallstones is affected by age, diet and ethnicity.[32] On the basis of their composition, gallstones can be divided into the following types: cholesterol stones, pigment stones, and mixed stones.[3] An ideal classification system is yet to be defined.[33]

Cholesterol stones vary from light yellow to dark green or brown or chalk white and are oval, usually solitary, between 2 and 3 cm long, each often having a tiny, dark, central spot. To be classified as such, they must be at least 80% cholesterol by weight (or 70%, according to the Japanese–classification system).[33] Between 35% and 90% of stones are cholesterol stones.[3]

Bilirubin ("pigment", "black pigment") stones are small, dark (often appearing black), and usually numerous. They are composed primarily of bilirubin (insoluble bilirubin pigment polymer) and calcium (calcium phosphate) salts that are found in bile. They contain less than 20% of cholesterol (or 30%, according to the Japanese-classification system).[33] Between 2% and 30% of stones are bilirubin stones.[3]

Mixed (brown pigment stones) typically contain 20–80% cholesterol (or 30–70%, according to the Japanese- classification system).[33] Other common constituents are calcium carbonate, palmitate phosphate, bilirubin and other bile pigments (calcium bilirubinate, calcium palmitate and calcium stearate). Because of their calcium content, they are often radiographically visible. They typically arise secondary to infection of the biliary tract which results in the release of β-glucuronidase (by injured hepatocytes and bacteria) which hydrolyzes bilirubin glucuronides and increases the amount of unconjugated bilirubin in bile. Between 4% and 20% of stones are mixed.[3]

Gallstones can vary in size and shape from as small as a grain of sand to as large as a golf ball.[34] The gallbladder may contain a single large stone or many smaller ones. Pseudoliths, sometimes referred to as sludge, are thick secretions that may be present within the gallbladder, either alone or in conjunction with fully formed gallstones.

Diagnosis is typically confirmed by abdominal ultrasound. Other imaging techniques used are ERCP and MRCP. Gallstone complications may be detected on blood tests.[2]

A positive Murphy's sign is a common finding on physical examination during a gallbladder attack.

Maintaining a healthy weight by getting sufficient exercise and eating a healthy diet that is high in fiber may help prevent gallstone formation.[2]

Cholecystectomy (gallbladder removal) has a 99% chance of eliminating the recurrence of cholelithiasis. The lack of a gallbladder may have no negative consequences in many people. However, there is a portion of the population—between 10 and 15%—who develop a condition called postcholecystectomy syndrome[36] which may cause nausea, indigestion, diarrhea, and episodes of abdominal pain.[37]

There are two surgical options for cholecystectomy:

Cholesterol gallstones can sometimes be dissolved with ursodeoxycholic acid taken by mouth, but it may be necessary for the person to take this medication for years.[38] Gallstones may recur, however, once the drug is stopped. Obstruction of the common bile duct with gallstones can sometimes be relieved by endoscopic retrograde sphincterotomy (ERS) following endoscopic retrograde cholangiopancreatography (ERCP).[38]

Gallstones can be a valued by-product of animals butchered for meat because of their use as an antipyretic and antidote in the traditional medicine of some cultures, particularly, in traditional Chinese medicine. The most highly prized gallstones tend to be sourced from old dairy cows, termed calculus bovis or niu-huang (yellow thing of cattle) in Chinese. Much as in the manner of diamond mines, some slaughterhouses carefully scrutinize workers for gallstone theft.[39]