Buprenorphine, sold under the brand name Subutex, among others, is an opioid used to treat opioid use disorder, acute pain, and chronic pain.[1] It can be used under the tongue, in the cheek, by injection, as a skin patch, or as an implant.[1][10] For opioid use disorder, it is typically started when withdrawal symptoms have begun and for the first two days of treatment under direct observation of a health care provider.[1] The combination formulation of buprenorphine/naloxone (Suboxone) is recommended to discourage misuse by injection.[1] Maximum pain relief is generally within an hour with effects up to 24 hours.[1]

Side effects may include respiratory depression (decreased breathing), sleepiness, adrenal insufficiency, QT prolongation, low blood pressure, allergic reactions, and opioid addiction.[1] Among those with a history of seizures, there is a risk of further seizures.[1] Opioid withdrawal following stopping buprenorphine is generally less severe than with other opioids.[1] It is unclear if use during pregnancy is safe and use while breastfeeding is not recommended.[1] Buprenorphine affects different types of opioid receptors in different ways.[1] Depending on the type of receptor it may be an agonist, partial agonist, or antagonist.[1] 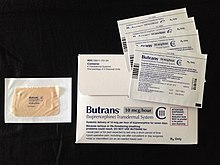 Buprenorphine patches in the pouch with packaging. A removed patch is shown on the left.

Buprenorphine is used to treat people with opioid use disorder.[1][15]: 84–7  The combination formulation of buprenorphine/naloxone is generally preferred as naloxone, an opioid antagonist, has a higher bioavailability intravenously and results in acute withdrawal if the formulation is crushed and injected.[1][16]: 99  Prior to starting buprenorphine, individuals should wait long enough after their last dose of opioid until they have some withdrawal symptoms to allow for the medication to bind the receptors, but if taken too soon, buprenorphine can displace other opioids bound to the receptors and precipitate an acute withdrawal. The dose of buprenorphine is then adjusted until symptoms improve, and individuals remain on a maintenance dose through treatment.[16]: 99–100 [17]

Both buprenorphine and methadone are medications used for detoxification and opioid replacement therapy and appear to have similar effectiveness based on limited data[18] and are safe for pregnant women with opioid use disorder,[16]: 101 [17] although preliminary evidence suggests that methadone is more likely to cause neonatal abstinence syndrome.[19] In the US, only designated clinics can prescribe methadone for opioid use disorder in which people starting treatment must follow-up daily, which may be appropriate for those requiring a more structured environment. Alternatively, buprenorphine can be prescribed by any clinician with a waiver allowing people to receive treatment as a part of their routine care.[15]: 84–5

A transdermal patch is available for the treatment of chronic pain.[1] These patches are not indicated for use in acute pain, pain that is expected to last only for a short period of time, or pain after surgery, nor are they recommended for opioid addiction.[20]

The defined daily dose is 8 mg under the tongue.[4] 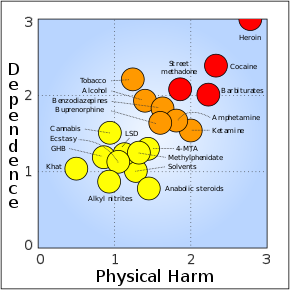 A 2007 assessment of harm from recreational drug use (mean physical harm and mean dependence liability). Buprenorphine was ranked 9th in dependence, 8th in physical harm, and 11th in social harm.[25]

Common side effects are similar to those of other opioids and include: nausea and vomiting, drowsiness, dizziness, headache, memory loss, cognitive and neural inhibition, perspiration, itchiness, dry mouth, shrinking of the pupils of the eyes (miosis), orthostatic hypotension, male ejaculatory difficulty, decreased libido, and urinary retention. Constipation and CNS effects are seen less frequently than with morphine.[26]

The most severe side effect associated with buprenorphine is respiratory depression (insufficient breathing).[1] It occurs more often in those who are also taking benzodiazepines, alcohol, or have underlying lung disease.[1] The usual reversal agents for opioids, such as naloxone, may be only partially effective and additional efforts to support breathing may be required.[1] Respiratory depression may be less than with other opioids, particularly with chronic use.[17] However, in the setting of acute pain management, buprenorphine appears to cause the same rate of respiratory depression as other opioids such as morphine.[27]

Buprenorphine treatment carries the risk of causing psychological or physical dependence. Buprenorphine has a slow onset and a long half-life of 24 to 60 hours. Once a person has stabilized on the medication, there are three options: continual use, switching to buprenorphine/naloxone, or medically supervised withdrawal.[17]

It is difficult to achieve acute opioid analgesia in persons using buprenorphine for opioid replacement therapy.[28]

Buprenorphine has been reported to possess the following pharmacological activity:[32]

Buprenorphine is also known to bind to with high affinity and antagonize the putative ε-opioid receptor.[48][49]

The active metabolites of buprenorphine are not thought to be clinically important in its central nervous system effects.[47]

Unlike some other opioids and opioid antagonists, buprenorphine binds only weakly to and possesses little if any activity at the sigma receptor.[52][53]

Similarly to various other opioids, buprenorphine has also been found to act as an agonist of the toll-like receptor 4, albeit with very low affinity.[36]

Buprenorphine is a semi-synthetic analogue of thebaine[59] and is fairly soluble in water, as its hydrochloride salt.[60] It degrades in the presence of light.[60]

Buprenorphine and norbuprenorphine may be quantitated in blood or urine to monitor use or abuse, confirm a diagnosis of poisoning, or assist in a medicolegal investigation. There is a significant overlap of drug concentrations in body fluids within the possible spectrum of physiological reactions ranging from asymptomatic to comatose. Therefore, it is critical to have knowledge of both the route of administration of the drug and the level of tolerance to opioids of the individual when results are interpreted.[61]

In 1969, researchers at Reckitt & Colman (now Reckitt Benckiser) had spent 10 years attempting to synthesize an opioid compound "with structures substantially more complex than morphine [that] could retain the desirable actions whilst shedding the undesirable side effects". Physical dependence and withdrawal from buprenorphine itself remain important issues since buprenorphine is a long-acting opioid.[62] Reckitt found success when researchers synthesized RX6029 which had showed success in reducing dependence in test animals. RX6029 was named buprenorphine and began trials on humans in 1971.[63][64] By 1978, buprenorphine was first launched in the UK as an injection to treat severe pain, with a sublingual formulation released in 1982.

In the years prior to buprenorphine/naloxone's approval, Reckitt Benckiser had lobbied Congress to help craft the Drug Addiction Treatment Act of 2000 (DATA 2000), which gave authority to the Secretary of Health and Human Services to grant a waiver to physicians with certain training to prescribe and administer Schedule III, IV, or V narcotic drugs for the treatment of addiction or detoxification. Prior to the passage of this law, such treatment was not permitted in outpatient settings except for clinics designed specifically for drug addiction.[68]

The waiver, which can be granted after the completion of an eight-hour course, is required for outpatient treatment of opioid addiction with buprenorphine. Initially, the number of people each approved physician could treat was limited to ten. This was eventually modified to allow approved physicians to treat up to a hundred people with buprenorphine for opioid addiction in an outpatient setting.[69] This limit was increased by the Obama administration, raising the number of patients to which doctors can prescribe to 275.[70]

New Jersey authorized paramedics to give buprenorphine to people at the scene after they have recovered from an overdose.[71]

In the European Union, Subutex and Suboxone, buprenorphine's high-dose sublingual tablet preparations, were approved for opioid use disorder treatment in September 2006.[72] In the Netherlands, buprenorphine is a List II drug of the Opium Law, though special rules and guidelines apply to its prescription and dispensation.

Buprenorphine has been introduced in most European countries as a transdermal formulation (marketed as Transtec) for the treatment of chronic pain not responding to non-opioids.

In combination with samidorphan or naltrexone (μ-opioid receptor antagonists), buprenorphine is under investigation for the treatment of cocaine dependence, and recently demonstrated effectiveness for this indication in a large-scale (n = 302) clinical trial (at a high buprenorphine dose of 16 mg but not a low dose of 4 mg).[81][82]

Buprenorphine has been used in the treatment of the neonatal abstinence syndrome,[83] a condition in which newborns exposed to opioids during pregnancy demonstrate signs of withdrawal.[84] In the United States, use currently is limited to infants enrolled in a clinical trial conducted under an FDA approved investigational new drug (IND) application.[85] Preliminary research suggests that buprenorphine is associated with shorter time in hospital for neonates, compared to methadone.[86] An ethanolic formulation used in neonates is stable at room temperature for at least 30 days.[87]

In one study, buprenorphine was found to be effective in a subset of individuals with treatment-refractory obsessive–compulsive disorder.[88]