Calcium channel blockers were discovered in 1964, with the first useful agent being verapamil.[8][9] They are commonly used.[6] A number of agents are available as generic medication and not very expensive.[4]

Dihydropyridine (DHP) calcium channel blockers are derived from the molecule dihydropyridine and often used to reduce systemic vascular resistance and arterial pressure. Sometimes when they are used to treat angina, the vasodilation and hypotension can lead to reflex tachycardia, which can be detrimental for patients with ischemic symptoms because of the resulting increase in myocardial oxygen demand. Dihydropyridine calcium channel blockers can worsen proteinuria in patients with nephropathy.[12]

This CCB class is easily identified by the suffix "-dipine".

Phenylalkylamine calcium channel blockers are relatively selective for myocardium, reduce myocardial oxygen demand and reverse coronary vasospasm, and are often used to treat angina. They have minimal vasodilatory effects compared with dihydropyridines and therefore cause less reflex tachycardia, making it appealing for treatment of angina, where tachycardia can be the most significant contributor to the heart's need for oxygen. Therefore, as vasodilation is minimal with the phenylalkylamines, the major mechanism of action is causing negative inotropy. Phenylalkylamines are thought to access calcium channels from the intracellular side, although the evidence is somewhat mixed.[14] 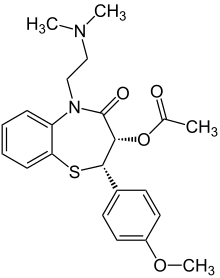 While most of the agents listed above are relatively selective, there are additional agents that are considered nonselective. These include mibefradil, bepridil, flunarizine (BBB crossing), fluspirilene (BBB crossing),[15] and fendiline.[16]

Gabapentinoids, such as gabapentin and pregabalin, are selective blockers of α2δ subunit-containing voltage-gated calcium channels. They are used primarily to treat epilepsy and neuropathic pain.

Ziconotide, a peptide compound derived from the omega-conotoxin, is a selective N-type calcium channel blocker that has potent analgesic properties that are equivalent to approximate 1,000 times that of morphine. It must be delivered via the intrathecal (directly into the cerebrospinal fluid) route via an intrathecal infusion pump.

Depending on the type of calcium channel blocker, they are used for high blood pressure, irregular heart rhythms, or angina.[10]

CCBs have been shown to be slightly more effective than beta blockers at lowering cardiovascular mortality, but they are associated with more side effects.[17][18] Risks; however, were mainly found to be associated with short-acting CCBs.[19]

Side effects of calcium channel blockers are mostly an exaggeration of their therapeutic actions.[10] The commonest side effects include abdominal pain and constipation resulting from effects on calcium channels in smooth muscle of gastrointestinal tract, and flushing and headache resulting from vasodilation. Dizziness, palpitations, rash and swelling of ankles can also occur.[20][10] Angioedema, erectile dysfunction, gum swelling, depression and muscle pains can occur but are uncommon.[20][10]

Swelling of the feet, ankles and legs (peripheral edema), is a common side effect with CCB use, particularly dihydropyridines, and more likely in women, older people, if standing for long, in warm environments and if there is heart failure.[10][21] It is more likely if used for long periods of time and results from dilated arterioles and leakiness of very small veins.[10][22] Since lymphatic drainage relies on contraction of the smooth muscle inside the lymphatic vessel supported by voltage-gated calcium channels, inhibition of voltage-gated calcium channel poses a threat towards lymphatic removal of interstitial fluid essential for normal lymphatic system functioning.[21][23] 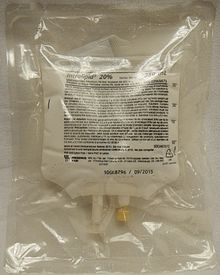 Mild CCB toxicity is treated with supportive care. Nondihydropyridine CCBs may produce profound toxicity and early decontamination, especially for slow-release agents, is essential. For severe overdoses, treatment usually includes close monitoring of vital signs and the addition of vasopressive agents and intravenous fluids for blood pressure support. Intravenous calcium gluconate (or calcium chloride if a central line is available) and atropine are first-line therapies. If the time of the overdose is known and presentation is within two hours of ingestion, activated charcoal, gastric lavage, and polyethylene glycol may be used to decontaminate the gut. Efforts for gut decontamination may be extended to within 8 hours of ingestion with extended-release preparations.

Hyperinsulinemia-euglycemia therapy has emerged as a viable form of treatment.[24] Although the mechanism is unclear, increased insulin may mobilize glucose from peripheral tissues to serve as an alternative fuel source for the heart (the heart mainly relies on oxidation of fatty acids). Theoretical treatment with lipid emulsion therapy has been considered in severe cases, but is not yet standard of care.

Caution should be taken when using verapamil with a beta blocker due to the risk of severe bradycardia. If unsuccessful, ventricular pacing should be used.[25] 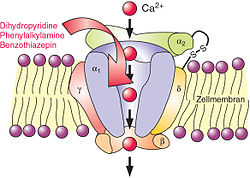 A calcium channel embedded in a cell membrane.

The term calcium channel blocker is a more accurate term than calcium antagonist, as they define drugs that block cellular entry of calcium through calcium channels rather than prevent its actions within cells.[10][20] In the body's tissues, the concentration of calcium ions (Ca2+
) outside cells is normally about 10000-fold higher than the concentration inside cells. Embedded in the membrane of some cells are calcium channels. When these cells receive a certain signal, the channels open, letting calcium rush into the cell. The resulting increase in intracellular calcium has different effects in different types of cells. Calcium channel blockers prevent or reduce the opening of these channels and thereby reduce these effects.

Several types of calcium channels occur, with a number of classes of blockers, but almost all of them preferentially or exclusively block the L-type voltage-gated calcium channel.[26]

Voltage-dependent calcium channels are responsible for excitation-contraction coupling of skeletal, smooth, and cardiac muscle and for regulating aldosterone and cortisol secretion in endocrine cells of the adrenal cortex.[27] In the heart, they are also involved in the conduction of the pacemaker signals. CCBs used as medications primarily have four effects: 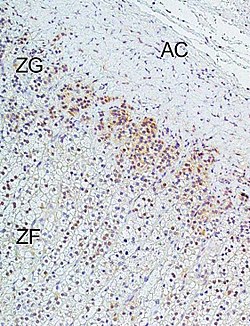 Reducing the force of contraction of the myocardium is known as the negative inotropic effect of calcium channel blockers.

Slowing down the conduction of electrical activity within the heart, by blocking the calcium channel during the plateau phase of the action potential of the heart (see: cardiac action potential), results in a negative chronotropic effect, or a lowering of heart rate. This can increase the potential for heart block. The negative chronotropic effects of CCBs make them a commonly used class of agents in individuals with atrial fibrillation or flutter in whom control of the heart rate is generally a goal. Negative chronotropy can be beneficial when treating a variety of disease processes because lower heart rates represent lower cardiac oxygen requirements. Elevated heart rate can result in significantly higher "cardiac work", which can result in symptoms of angina.

Because of the negative inotropic effects, the nondihydropyridine calcium channel blockers should be avoided (or used with caution) in individuals with cardiomyopathy.[28]

Unlike beta blockers, calcium channel blockers do not decrease the responsiveness of the heart to input from the sympathetic nervous system. Since moment-to-moment blood pressure regulation is carried out by the sympathetic nervous system (via the baroreceptor reflex), calcium channel blockers allow blood pressure to be maintained more effectively than do beta blockers. However, because dihydropyridine CCBs result in a decrease in blood pressure, the baroreceptor reflex often initiates a reflexive increase in sympathetic activity leading to increased heart rate and contractility.

Ionic calcium is antagonized by magnesium ions in the nervous system. Because of this, bioavailable supplements of magnesium, possibly including magnesium chloride, magnesium lactate, and magnesium aspartate, may increase or enhance the effects of calcium channel blockade.[29]

In 1883, Sydney Ringer realised the importance of calcium in cellular function.[9] Calcium channel blockers were first identified in the laboratory of German pharmacologist Albrecht Fleckenstein beginning in 1964.[9][30]

In 1025, Avicenna introduced the medicinal use of Taxus baccata for phytotherapy in The Canon of Medicine. He named this herbal drug "Zarnab" and used it as a cardiac remedy. This was the first known use of a calcium channel blocker drug, which were not in wide use in the Western world until the 1960s.[31]

Research indicates ethanol is involved in the inhibition of L-type calcium channels. One study showed the nature of ethanol binding to L-type calcium channels is according to first-order kinetics with a Hill coefficient around 1. This indicates ethanol binds independently to the channel, expressing noncooperative binding.[32] Early studies showed a link between calcium and the release of vasopressin by the secondary messenger system.[33] Vasopressin levels are reduced after the ingestion of alcohol.[34] The lower levels of vasopressin from the consumption of alcohol have been linked to ethanol acting as an antagonist to voltage-gated calcium channels (VGCCs). Studies conducted by Treistman et al. in the aplysia confirm inhibition of VGCC by ethanol. Voltage clamp recordings have been done on the aplysia neuron. VGCCs were isolated and calcium current was recorded using patch clamp technique having ethanol as a treatment. Recordings were replicated at varying concentrations (0, 10, 25, 50, and 100 mM) at a voltage clamp of +30 mV. Results showed calcium current decreased as concentration of ethanol increased.[35] Similar results have shown to be true in single-channel recordings from isolated nerve terminal of rats that ethanol does in fact block VGCCs.[36]

Research on the desert grass spider, Agelenopsis aperta, has shown that agatoxins IVA and IVB found in their venom selectively block calcium channels. These agatoxins are found in other spider species as well. Desert grass spider bites to insects result in rapid paralysis, but bites to humans are not considered medically significant.[37]