Desvenlafaxine, sold under the brand name Pristiq among others, is a medication used to treat major depressive disorder.[1] It is recommended that the need for further treatment be occasionally reassessed.[1] It appears less effective than its parent compound venlafaxine.[3] It is taken by mouth.[1]

Common side effects include dizziness, trouble sleeping, increased sweating, constipation, sleepiness, anxiety, and sexual problems.[1] Serious side effects may include suicide in those under the age of 25, serotonin syndrome, bleeding, mania, and high blood pressure.[1] A withdrawal syndrome may occur if the dose is rapidly decreased.[1] It is unclear if use during pregnancy or breastfeeding is safe.[4] It is an antidepressant of the serotonin-norepinephrine reuptake inhibitor (SNRI) class.[1]

Desvenlafaxine is primarily used as a treatment for major depressive disorder.[8] Use has only been studied up to 8 weeks.[1] It may be less effective than venlafaxine,[3] although some studies have found comparable efficacy with a lower rate of nausea.[9]

Doses of 50–400 mg/day appear effective for major depressive disorder, although no additional benefit was demonstrated at doses greater than 50 mg/day, and adverse events and discontinuations were more frequent at higher doses.[10]

Desvenlafaxine improves the HAM-D17 score[11] and measures of well being such as the Sheehan Disability Scale (SDS) and 5-item World Health Organization Well-Being Index (WHO-5).[12] 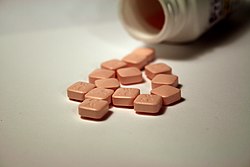 Wyeth announced on 23 January 2007 that it received an approvable letter from the Food and Drug Administration for desvenlafaxine. Final approval to sell the drug was contingent on a number of things, including:

The FDA approved the drug for antidepressant use in February 2008, and was to be available in US pharmacies in May 2008.[19]

In March 2017, the generic form of the drug was made available in the US.

On February 4, 2009, Health Canada approved use of desvenlafaxine for treatment of depression.[20][21]

Desvenlafaxine is classified as a schedule 4 (prescription only) drug in Australia. It was listed on the PBS (Pharmaceutical Benefits Scheme) in 2008 for the treatment of major depressive disorders.[24]