Phenytoin (PHT), sold under the brand name Dilantin among others,[1] is an anti-seizure medication.[2] It is useful for the prevention of tonic-clonic seizures and focal seizures, but not absence seizures.[2] The intravenous form, fosphenytoin, is used for status epilepticus that does not improve with benzodiazepines.[2] It may also be used for certain heart arrhythmias or neuropathic pain.[2] It can be taken intravenously or by mouth.[2] The intravenous form generally begins working within 30 minutes and is effective for 24 hours.[4] Blood levels can be measured to determine the proper dose.[2]

Common side effects include nausea, stomach pain, loss of appetite, poor coordination, increased hair growth, and enlargement of the gums.[2] Potentially serious side effects include sleepiness, self harm, liver problems, bone marrow suppression, low blood pressure, and toxic epidermal necrolysis.[2] There is evidence that use during pregnancy results in abnormalities in the baby.[2] It appears to be safe to use when breastfeeding.[2] Alcohol may interfere with the medication's effects.[2]

Phenytoin was first made in 1908 by the German chemist Heinrich Biltz and found useful for seizures in 1936.[6][7] It is on the World Health Organization's List of Essential Medicines.[8] Phenytoin is available as a generic medication and usually not too expensive.[9] The wholesale cost in the developing world is between US$0.003 and US$0.15 per dose.[10] A month of treatment is about US$30 in the United States.[2] In 2017, it was the 221st most commonly prescribed medication in the United States, with more than two million prescriptions.[11][12]

Treatment levels may also be achieved rapidly by giving 400 mg by mouth, followed two hour later by 300 mg, and two hours after that 300 mg.[2] Than the usual maintenance is used.[2]

The defined daily dose is 300 mg by mouth or by injection.[5]

Common side effects include nausea, stomach pain, loss of appetite, poor coordination, increased hair growth, and enlargement of the gums.[2] Potentially serious side effects include sleepiness, self harm, liver problems, bone marrow suppression, low blood pressure, and toxic epidermal necrolysis.[2] There is evidence that use during pregnancy results in abnormalities in the baby.[2] Its use appears to be safe during breastfeeding.[2] Alcohol may interfere with the medication's effects.[2]

Severe low blood pressure and abnormal heart rhythms can be seen with rapid infusion of IV phenytoin. IV infusion should not exceed 50 mg/min in adults or 1–3 mg/kg/min (or 50 mg/min, whichever is slower) in children. Heart monitoring should occur during and after IV infusion. Due to these risks, oral phenytoin should be used if possible.[19]

Phenytoin may accumulate in the cerebral cortex over long periods of time which can cause atrophy of the cerebellum. The degree of atrophy is related to the duration of phenytoin treatment and is not related to dosage of the medication.[22]

Phenytoin is known to be a causal factor in the development of peripheral neuropathy.[23]

Folate is present in food in a polyglutamate form, which is then converted into monoglutamates by intestinal conjugase to be absorbed by the jejunum. Phenytoin acts by inhibiting this enzyme, thereby causing folate deficiency, and thus megaloblastic anemia.[24] Other side effects may include: agranulocytosis,[25] aplastic anemia,[26] decreased white blood cell count,[27] and a low platelet count.[28]

Phenytoin is a known teratogen. The syndrome consists of craniofacial anomalies (broad nasal bridge, cleft lip and palate, smaller than normal head) and a mild form of mental retardation (average IQ=71).[29] This syndrome resembles the well-described fetal alcohol syndrome[30] and has also been called the "fetal hydantoin syndrome". Some recommend avoiding polytherapy and maintaining the minimal dose possible during pregnancy, but acknowledge that current data do not provide clear answers.[31] Data now being collected by the Epilepsy and Antiepileptic Drug Pregnancy Registry may one day answer this question definitively.

There is no good evidence that phenytoin is a human carcinogen.[32][33]

Phenytoin has been associated with drug-induced gingival enlargement (overgrowth of the gums), probably due to above-mentioned folate deficiency; indeed, evidence from a randomized controlled trial suggests that folic acid supplementation can prevent gingival enlargement in children who take phenytoin.[34] Plasma concentrations needed to induce gingival lesions have not been clearly defined. Effects consist of the following: bleeding upon probing, increased gingival exudate, pronounced gingival inflammatory response to plaque levels, associated in some instances with bone loss but without tooth detachment. 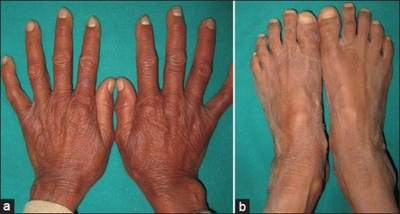 Phenytoin therapy has been linked to the life-threatening skin reactions Stevens–Johnson syndrome (SJS) and toxic epidermal necrolysis (TEN). These conditions are significantly more common in patients with a particular HLA-B allele, HLA-B*1502.[35] This allele occurs almost exclusively in patients with ancestry across broad areas of Asia, including South Asian Indians.

Phenytoin is primarily metabolized to its inactive form by the enzyme CYP2C9. Variations within the CYP2C9 gene that result in decreased enzymatic activity have been associated with increased phenytoin concentrations, as well as reports of drug toxicities due to these increased concentrations.[36] The U.S. Food and Drug Administration (FDA) notes on the phenytoin drug label that since strong evidence exists linking HLA-B*1502 with the risk of developing SJS or TEN in patients taking carbamazepine, consideration should be given to avoiding phenytoin as an alternative to carbamazepine in patients carrying this allele.[37]

Phenytoin has been known to cause drug-induced lupus.[38]

Phenytoin is also associated with induction of reversible IgA deficiency.[39]

Chronic phenytoin use has been associated with decreased bone density and increased bone fractures. Phenytoin induces metabolizing enzymes in the liver. This leads to increased metabolism of vitamin D, thus decreased vitamin D levels. Vitamin D deficiency, as well as low calcium and phosphate in the blood cause decreased bone mineral density.[21]

Phenytoin is an inducer of the CYP3A4 and CYP2C9 families of the P450 enzyme responsible for the liver's degradation of various drugs.[40]

A 1981 study by the National Institutes of Health showed that antacids administered concomitantly with phenytoin "altered not only the extent of absorption but also appeared to alter the rate of absorption. Antacids administered in a peptic ulcer regimen may decrease the AUC of a single dose of phenytoin. Patients should be cautioned against concomitant use of antacids and phenytoin."[41]

Warfarin (Coumadin) and trimethoprim increase serum phenytoin levels and prolong the serum half-life of phenytoin by inhibiting its metabolism. Consider using other options if possible.[42] 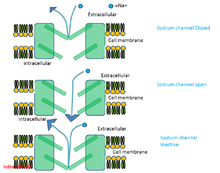 Phenytoin is believed to protect against seizures by causing voltage-dependent block of voltage gated sodium channels.[43] This blocks sustained high frequency repetitive firing of action potentials. This is accomplished by reducing the amplitude of sodium-dependent action potentials through enhancing steady state inactivation. Sodium channels exist in three main conformations: the resting state, the open state, and the inactive state.

The primary site of action appears to be the motor cortex where spread of seizure activity is inhibited.[45] Possibly by promoting sodium efflux from neurons, phenytoin tends to stabilize the threshold against hyperexcitability caused by excessive stimulation or environmental changes capable of reducing membrane sodium gradient. This includes the reduction of post-tetanic potentiation at synapses which prevents cortical seizure foci from detonating adjacent cortical areas. Phenytoin reduces the maximal activity of brain stem centers responsible for the tonic phase of generalized tonic-clonic seizures.[19]

Phenytoin (diphenylhydantoin) was first synthesized by German chemist Heinrich Biltz in 1908.[50] Biltz sold his discovery to Parke-Davis, which did not find an immediate use for it. In 1938, outside scientists including H. Houston Merritt and Tracy Putnam discovered phenytoin's usefulness for controlling seizures, without the sedative effects associated with phenobarbital.

According to Goodman and Gilman's Pharmacological Basis of Therapeutics

In contrast to the earlier accidental discovery of the antiseizure properties of potassium bromide and phenobarbital, phenytoin was the product of a search among nonsedative structural relatives of phenobarbital for agents capable of suppressing electroshock convulsions in laboratory animals.[51]

It was approved by the United States Food and Drug Administration in 1953 for use in seizures.

Jack Dreyfus, founder of the Dreyfus Fund, became a major proponent of phenytoin as a means to control nervousness and depression when he received a prescription for Dilantin in 1966. He has claimed to have supplied large amounts of the drug to Richard Nixon throughout the late 1960s and early 1970s, although this is disputed by former White House aides.[52] Dreyfus' experience with phenytoin is outlined in his book, A Remarkable Medicine Has Been Overlooked.[53] Despite more than $70 million in personal financing, his push to see phenytoin evaluated for alternative uses has had little lasting effect on the medical community. This was partially because Parke-Davis was reluctant to invest in a drug nearing the end of its patent life, and partially due to mixed results from various studies.

In 2008, the drug was put on the FDA's Potential Signals of Serious Risks List to be further evaluated for approval. The list identifies medications that the FDA has identified a potential safety issue, but does not mean that FDA has identified a causal relationship between the drug and the listed risk. To address this concern, the Warnings and Precautions section of the labeling for Dilantin injection was updated to include additional information about purple glove syndrome in November 2011.[54]

Phenytoin is available as a generic medication and usually not too expensive.[9] Wholesale it costs between US$0.003 and US$0.15 per dose.[10] A month of treatment is about US$30 in the United States.[2]

Since September 2012, the marketing licence in the UK has been held by Flynn Pharma Ltd, of Dublin, Ireland, and the product, although identical, has been called Phenytoin Sodium xxmg Flynn Hard Capsules. (The xxmg in the name refers to the strength—for example "Phenytoin sodium 25 mg Flynn Hard Capsules").[55] The capsules are still made by Pfizer's Goedecke subsidiary's plant in Freiburg, Germany and they still have Epanutin printed on them.[56] After Pfizer's sale of the UK marketing licence to Flynn Pharma, the price of a 28-pack of 25 mg phenytoin sodium capsules marked Epanutin rose from 66p (about $0.88) to £15.74 (about $25.06). Capsules of other strengths also went up in price by the same factor—2384%,[57] costing the UK's National Health Service an extra £43 million (about $68.44 million) a year.[58] The companies were referred to the Competition and Markets Authority who found that they had exploited their dominant position in the market to charge "excessive and unfair" prices.[59]

Phenytoin is marketed under many trade names worldwide.[1]

Tentative evidence suggests that topical phenytoin is useful in wound healing in people with chronic skin wounds.[61][62] A meta-analysis also supported the use of phenytoin in managing various ulcers.[63]

Some clinical trials have explored whether phenytoin can be used as neuroprotector in multiple sclerosis.[64]