Topiramate, sold under the brand name Topamax among others, is a medication used to treat epilepsy and prevent migraines.[2] It has also been used in alcohol dependence.[2] For epilepsy this includes treatment for generalized or focal seizures.[3] It is taken by mouth.[2]

Common side effects include tingling, loss of appetite, feeling tired, abdominal pain, hair loss, and trouble concentrating.[2][3] Serious side effects may include suicide, increased ammonia levels resulting in encephalopathy, and kidney stones.[2] Use in pregnancy may result in harm to the baby and use during breastfeeding is not recommended.[4] How it works is unclear.[2] 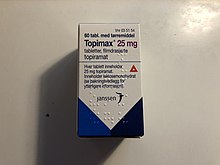 A package of topiramate 25mg from Norway

Topiramate is used to treat epilepsy in children and adults, and it was originally used as an anticonvulsant.[8] In children, it is indicated for the treatment of Lennox-Gastaut syndrome, a disorder that causes seizures and developmental delay. It is most frequently prescribed for the prevention of migraines[8] as it decreases the frequency of attacks.[9][10] Topirimate is used to treat medication overuse headache and is recommended by the European Federation of Neurological Societies as one of the few medications showing effectiveness for this indication.[11]

A 2018 review found topiramate of no use in chronic low back pain.[12] Topiramate has not been shown to work as a pain medicine in diabetic neuropathy, the only neuropathic condition in which it has been adequately tested.[13]

One common off-label use for topiramate is in the treatment of bipolar disorder.[14][15][16] A review published in 2010 suggested a benefit of topiramate in the treatment of symptoms of borderline personality disorder, however the authors noted that this was based only on one randomized controlled trial and requires replication.[17]

Topiramate has been used as a treatment for alcoholism.[18] The VA/DoD 2015 guideline on substance use disorders lists topiramate as a "strong for" in its recommendations for alcohol use disorder.[19]

Other uses include treatment of obesity[20][21] and antipsychotic-induced weight gain.[22][23] It is being studied to treat post traumatic stress disorder.[24] In 2012, the combination phentermine/topiramate was approved in the United States for weight loss.

People taking topiramate should be aware of the following risks:

Rarely, the inhibition of carbonic anhydrase may be strong enough to cause metabolic acidosis of clinical importance.[32]

The U.S. Food and Drug Administration (FDA) has notified prescribers that topiramate can cause acute myopia and secondary angle closure glaucoma in a small subset of people who take topiramate regularly.[33] The symptoms, which typically begin in the first month of use, include blurred vision and eye pain. Discontinuation of topiramate may halt the progression of the ocular damage and may reverse the visual impairment.

Preliminary data suggests that, as with several other anti-epileptic drugs, topiramate carries an increased risk of congenital malformations.[34] This might be particularly important for women who take topiramate to prevent migraine attacks. In March 2011, the FDA notified healthcare professionals and patients of an increased risk of development of cleft lip and/or cleft palate (oral clefts) in infants born to women treated with Topamax (topiramate) during pregnancy and placed it in Pregnancy Category D.[27]

Topiramate has been associated with a statistically significant increase in suicidality,[35] and "suicidal thoughts or actions" is now listed as one of the possible side effects of the drug "in a very small number of people, about 1 in 500."[25][36]

Symptoms of acute and acute on chronic exposure to topiramate range from asymptomatic to status epilepticus, including in patients with no seizure history.[37][38] In children, overdose may also result in hallucinations.[38] Topiramate has been deemed the primary substance that led to fatal overdoses in cases that were complicated by polydrug exposure.[39] The most common signs of overdose are dilated pupils, somnolence, dizziness, psychomotor agitation, and abnormal, uncoordinated body movements.[37][38][39]

Symptoms of overdose may include but are not limited to:[citation needed]

A specific antidote is not available. Treatment is entirely supportive.

Topiramate has many drug-drug interactions. Some of the most common are listed below:

Chemically, topiramate is a sulfamate modified fructose diacetonide - a rather unusual chemical structure for a pharmaceutical.

Topiramate is quickly absorbed after oral use. Most of the drug (70%) is excreted in the urine unchanged. The remainder is extensively metabolized by hydroxylation, hydrolysis, and glucuronidation. Six metabolites have been identified in humans, none of which constitutes more than 5% of an administered dose.

Several cellular targets have been proposed to be relevant to the therapeutic activity of topiramate.[42] These include (1) voltage-gated sodium channels; (2) high-voltage-activated calcium channels; (3) GABA-A receptors; (4) AMPA/kainate receptors; and (5) carbonic anhydrase isoenzymes. There is evidence that topiramate may alter the activity of its targets by modifying their phosphorylation state instead of by a direct action.[43] The effect on sodium channels could be of particular relevance for seizure protection. Although topiramate does inhibit high-voltage-activated calcium channels, the relevance to clinical activity is uncertain. Effects on specific GABA-A receptor isoforms could also contribute to the antiseizure activity of the drug. Topiramate selectively inhibits cytosolic (type II) and membrane associated (type IV) forms of carbonic anhydrase. The action on carbonic anhydrase isoenzymes may contribute to the drug's side-effects, including its propensity to cause metabolic acidosis and calcium phosphate kidney stones.

Topiramate inhibits maximal electroshock and pentylenetetrazol-induced seizures as well as partial and secondarily generalized tonic-clonic seizures in the kindling model, findings predictive of a broad spectrum of activities clinically. Its action on mitochondrial permeability transition pores has been proposed as a mechanism.[44]

Blood, serum, or plasma topiramate concentrations may be measured using immunoassay or chromatographic methods to monitor therapy, confirm a diagnosis of poisoning in hospitalized patients, or to assist in a medicolegal death investigation. Plasma levels are usually less than 10 mg/L during therapeutic administration, but can range from 10–150 mg/L in overdose victims.[46][47][48]

Topiramate was discovered in 1979 by Bruce E. Maryanoff and Joseph F. Gardocki during their research work at McNeil Pharmaceuticals.[49][50] The commercial usage of Topiramate began in 1996.[51] Mylan Pharmaceuticals was granted final approval by the FDA for the sale of generic topiramate in the United States and the generic version was made available in September 2006.[52] The last patent for topiramate in the U.S. was for use in children and expired on February 28, 2009.[53]