Dextropropoxyphene, which has been sold under the brand name Darvon among others, is a pain medication in the opioid category.[1] It has been used for pain but the benefits are similar to paracetamol (acetaminophine) and less than ibuprofen.[1][4] An equivalent amount has half the strength of codeine.[5] It is taken by mouth.[6] Onset of effects are within an hour and may last for up to 6 hours.[1]

Side effects may include heart arrhythmias, decreased breathing, and seizures.[7][1] It has a high risk of misuse and historically was a common cause of death from drug misuse.[1][8] Some effects may be reversed with naloxone.[9] Use during pregnancy may harm the baby.[1]

Dextropropoxyphene came into medical use in the United States in 1957.[1] It has subsequently been removed from the market in the United States, Canada, New Zealand, and India.[7] While still available in Australia, there are restrictions as of 2014.[7] In the United Kingdom it is not avaliable to new patients.[9] It was generally sold as a combination medication with either paracetamol or aspirin.[1]

While dextropropoxyphene has been used for mild to moderate pain its benefits are similar to paracetamol (acetaminophine) and less than ibuprofen.[1][4] 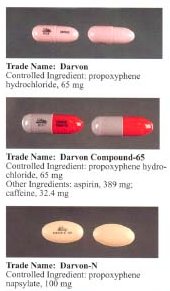 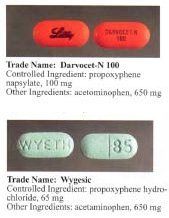 It is not intended for use in patients who are prone to suicide, anxiety, panic, or addiction.

An overdose of dextropropoxyphene may lead to various systemic effects. Excessive opioid receptor stimulation is responsible for the CNS depression, respiratory depression, aspiration pneumonia, miosis, and gastrointestinal effects seen in propoxyphene poisoning. It may also account for mood- or thought-altering effects. In the presence of amphetamine, propoxyphene overdose increases CNS stimulation and may cause fatal convulsive seizures.[10]

These direct cardiac effects include decreased heart rate (i.e. cardiovascular depression), decreased contractility, and decreased electrical conductivity (i.e., increased PR, AH, HV, and QRS intervals). These effects appear to be due to their local anesthetic activity and are not reversed by naloxone.[11][12][14] Widening of the QRS complex appears to be a result of a quinidine-like effect of propoxyphene, and sodium bicarbonate therapy appears to have a positive direct effect on the QRS dysrhythmia.[15]

Seizures may result from either opioid or local anesthetic effects.[11] Pulmonary edema may result from direct pulmonary toxicity, neurogenic/anoxic effects, or cardiovascular depression.[12]

Balance disorder is possible, with risk of falls from standing height.

Detectable levels of propoxyphene/dextropropoxyphene may stay in a person's system for up to 9 days after last dose and can be tested for specifically in nonstandard urinalysis, but may remain in the body longer in minuscule amounts. Propoxyphene does not show up on standard opiate/opioid tests because it is not chemically related to opiates as part of the OPI or OPI 2000 panels, which detect morphine and related compounds. It is most closely related to methadone.

Dextropropoxyphene is sometimes combined with acetaminophen. Trade names include Darvocet-N, Di-Gesic,[17] and Darvon with APAP (for dextropropoxyphene and paracetamol).[18] The British approved name of the paracetamol/dextropropoxyphene preparation is co-proxamol (sold under a variety of brand names); however, it has been withdrawn since 2007, and is no longer available, with exceptions.[19] The paracetamol combination(s) are known as Capadex or Di-Gesic in Australia, Lentogesic in South Africa, and Di-Antalvic in France (unlike co-proxamol, which is an approved name, these are all brand names).

Dextropropoxyphene is known under several synonyms, including:

Before the FDA-directed recall, dextropropoxyphene HCl was available in the United States as a prescription formulation with paracetamol (acetaminophen) in ratio from 30 mg / 600 mg to 100 mg / 650 mg (or 100 mg / 325 mg in the case of Balacet), respectively. These are usually named Darvocet. Darvon is a pure propoxyphene preparation that does not contain paracetamol.

In Australia, dextropropoxyphene is available on prescription, both as a combined product (32.5 mg dextropropoxyphene per 325 mg paracetamol branded as Di-gesic, Capadex, or Paradex; it is also available in pure form (100-mg capsules) known as Doloxene, however its use has been restricted.[21] 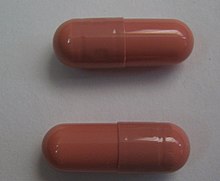 Dextropropoxyphene is subject to some controversy; while many physicians prescribe it for a wide range of mildly to moderately painful symptoms, as well as for treatment of diarrhea, many others refuse to prescribe it, citing limited effectiveness. In addition, the therapeutic index of dextroproxyphene is relatively narrow.

Caution should be used when administering dextropropoxyphene, particularly with children and the elderly and with patients who may be pregnant or breastfeeding; other reported problems include kidney, liver, or respiratory disorders, and prolonged use. Attention should be paid to concomitant use with tranquillizers, antidepressants, or excess alcohol.

Darvon, a dextropropoxyphene formulation made by Eli Lilly, which had been on the market for 25 years, came under heavy fire in 1978 by consumer groups that said it was associated with suicide. Darvon was never withdrawn from the market, until recently, but Lilly has waged a sweeping, and largely successful, campaign[citation needed] among doctors, pharmacists, and Darvon users to defend the drug as safe when it is used in proper doses and not mixed with alcohol. After determining the risks outweigh the benefits, the USFDA requested physicians stop prescribing the drug. On November 19, 2010, the FDA announced that Xanodyne Pharmaceuticals agreed to withdraw Darvon and Darvocet in the United States, followed by manufacturers of dextropropoxyphene.[22][23]

In Australia, both pure dextropropoxyphene capsules (as napsylate, 100 mg), marketed as Doloxene, and combination tablets and capsules (with paracetamol) all containing 32.5 mg dextropropoxyphene HCl with 325 mg paracetamol, which are currently available on prescription were supposed to be withdrawn from 1 March 2012,[24] but Aspen Pharma sought a review in the Administrative Appeals Tribunal which ruled in 2013 that the drugs could be sold under strict conditions.[25]

On December 1, 2010, Health Canada and Paladin Labs Inc. announced the voluntary recall and withdrawal of Darvon-N from the Canadian market and the discontinuation of sale of Darvon-N.[26]

In February 2010, Medsafe announced Paradex and Capadex (forms of dextropropoxyphene) were being withdrawn from the marketplace due to health issues, and withdrawal in other countries.[28]

On June 12, 2013, the Indian government suspended the manufacture, sale, and distribution of the drug under Section 26A of the 1940 Drugs and Cosmetic Act.[29]

As of March 2011, all products containing the substance are withdrawn because of safety issues after a European Commission decision.[31][32]

At the time, people who abuse alcohol and other substances and take combination dextropoxyphene / acetaminophen (paracetamol) were discussed as needing to take many combination tablets to reach euphoria, because the amount of dextropropoxyphene per tablet is relatively low (30–40 mg). The ingested paracetamol—the other component—may then reach liver toxic levels. In the case of alcoholics, who often already have damaged livers, even a relatively small overdose with paracetamol may produce hepatotoxicity, liver failure, and necrosis. This toxicity with the combination of overdosed dextroproxyphene (with its CNS/respiratory depression/vomit with risk for aspiration pneumonia, as well as cardiotoxicity) and paracetamol-induced liver damage can result in death.

In the United Kingdom, preparations containing only dextropropoxyphene were discontinued in 2004.[33] In 2007, the Medicines and Healthcare products Regulatory Agency removed the licence for co-proxamol, also called distalgesic.[34] From then on in the UK, co-proxamol is only available on a named patient basis, for long-term chronic pain and only to those who have already been prescribed this medicine. Its withdrawal from the UK market is a result of concerns relating to its toxicity in overdose (even small overdoses can be fatal), and dangerous reaction with alcohol. Recreational use in the UK is uncommon. Many patients have been prescribed alternative combinations of drugs as a replacement.[35]

The motivation for the withdrawal of co-proxamol was the reduction in suicides and a key part of the agency's justification of its decision was based upon studies showing co-proxamol was no more effective than paracetamol alone in pain management.[36] Prescribing authorities, such as the Royal College of General Practitioners, unanimously recommended withdrawal, while patients who responded to the agency's request for information tended to want to continue treatment.[37]

The co-proxamol preparations available in the UK contained a subtherapeutic dose of paracetamol, 325 mg per tablet.[38] Patients were warned not to take more than eight tablets in one day, a total dose of 2600 mg paracetamol per day. Despite this reduced level, patients were still at a high risk of overdose; coproxamol was second only to tricyclic antidepressants as the most common prescription drugs used in overdose.[36] Following the reduction in prescribing in 2005–2007, prior to its complete withdrawal, the number of deaths associated with the drug dropped significantly. Additionally, patients have not substituted other drugs as a method of overdose.[39]

The decision to withdraw co-proxamol has met with some controversy; it has been brought up in the House of Commons on two occasions, 13 July 2005[40] and on 17 January 2007.[41] Patients have found alternatives to co-proxamol either too strong, too weak, or with intolerable side effects.[citation needed] During the House of Commons debates, it is quoted that originally some 1,700,000 patients in the UK were prescribed co-proxamol. Following the phased withdrawal, this has eventually been reduced to 70,000. However, this apparently is the residual pool of patients who cannot find alternate analgesia to co-proxamol.[citation needed]

The safety net of prescribing co-proxamol after license withdrawal from 31 December 2007, on a "named patient" basis where doctors agree a clinical need exists, has been rejected by most UK doctors[citation needed] because the wording that "responsibility will fall on the prescriber" is unacceptable to most doctors. Some patients intend to take the case to the European Court of Human Rights.[42] However, the European Medicines Agency has recently backed the agency's decision, and recommended in June 2009 that propoxyphene preparations be withdrawn across the European Union.[43]

On 28 March 2017, NHS Clinical Commissioners announced that co-proxamol will be no longer available under NHS England as part of £400m of spending cuts for prescriptions that are believed to have little or no clinical value.[44]

In January 2009, an FDA advisory committee voted 14 to 12 against the continued marketing of propoxyphene products, based on its weak pain-killing abilities, addictiveness, association with drug deaths and possible heart problems, including arrhythmia. A subsequent re-evaluation resulted in a July 2009 recommendation to strengthen the boxed warning for propoxyphene to reflect the risk of overdose.[45] Dextropropoxyphene subsequently carried a black box warning in the U.S., stating:

Propoxyphene should be used with extreme caution, if at all, in patients who have a history of substance/drug/alcohol abuse, depression with suicidal tendency, or who already take medications that cause drowsiness (e.g., antidepressants, muscle relaxants, pain relievers, sedatives, tranquilizers). Fatalities have occurred in such patients when propoxyphene was misused.[46]

Because of potential for side effects, this drug is on the list for high-risk medications in the elderly.[47]

On November 19, 2010, the FDA requested manufacturers withdraw propoxyphene from the US market, citing heart arrhythmia in patients who took the drug at typical doses.[48] Tramadol, which lacks the cardiotoxicity, has been recommended instead of propoxyphene, as it is also indicated for mild to moderate pain, and is less likely to be misused or cause addiction than other opioids.[49]

High toxicity and relatively easy availability made propoxyphene a drug of choice for right-to-die societies. It is listed in Dr. Philip Nitschke's The Peaceful Pill Handbook and Dr. Pieter Admiraal's Guide to a Humane Self-Chosen Death.[50][51] "With the withdrawal of the barbiturate sleeping tablets from the medical prescribing list, propoxyphene has become the most common doctor-prescribed medication used by seriously ill people to end their lives."[50]