Constipation has many causes.[4] Common causes include slow movement of stool within the colon, irritable bowel syndrome, and pelvic floor disorders.[4] Underlying associated diseases include hypothyroidism, diabetes, Parkinson's disease, celiac disease, non-celiac gluten sensitivity, colon cancer, diverticulitis, and inflammatory bowel disease.[4][5][6][9] Medications associated with constipation include opioids, certain antacids, calcium channel blockers, and anticholinergics.[4] Of those taking opioids about 90% develop constipation.[10] Constipation is more concerning when there is weight loss or anemia, blood is present in the stool, there is a history of inflammatory bowel disease or colon cancer in a person's family, or it is of new onset in someone who is older.[11]

Treatment of constipation depends on the underlying cause and the duration that it has been present.[4] Measures that may help include drinking enough fluids, eating more fiber, and exercise.[4] If this is not effective, laxatives of the bulk forming agent, osmotic agent, stool softener, or lubricant type may be recommended.[4] Stimulant laxatives are generally reserved for when other types are not effective.[4] Other treatments may include biofeedback or in rare cases surgery.[4]

In the general population rates of constipation are 2–30 percent.[7] Among elderly people living in a care home the rate of constipation is 50–75 percent.[10] People spend, in the United States, more than US$250 million on medications for constipation a year.[12] 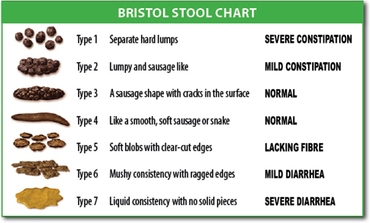 Constipation is a symptom, not a disease. Most commonly, constipation is thought of as infrequent bowel movements, usually less than 3 stools per week.[13][14] However, people may have other complaints as well including:[3][15]

The causes of constipation can be divided into congenital, primary, and secondary.[2] The most common kind is primary and not life-threatening.[16] It can also be divided by the age group affected such as children and adults.

Primary or functional constipation is defined by ongoing symptoms for greater than six months not due to an underlying cause such as medication side effects or an underlying medical condition.[2][17] It is not associated with abdominal pain, thus distinguishing it from irritable bowel syndrome.[2] It is the most common kind of constipation, and is often multifactorial.[16][18] In adults, such primary causes include: dietary choices such as insufficient dietary fiber or fluid intake, or behavioral causes such as decreased physical activity. In the elderly, common causes have been attributed to insufficient dietary fiber intake, inadequate fluid intake, decreased physical activity, side effects of medications, hypothyroidism, and obstruction by colorectal cancer.[19] Evidence to support these factors however is poor.[19]

Secondary causes include side effects of medications such as opiates, endocrine and metabolic disorders such as hypothyroidism, and obstruction such as from colorectal cancer.[18] Celiac disease and non-celiac gluten sensitivity may also present with constipation.[5][20][6] Cystocele can develop as a result of chronic constipation.[21]

Many medications have constipation as a side effect. Some include (but are not limited to) opioids, diuretics, antidepressants, antihistamines, antispasmodics, anticonvulsants, tricyclic antidepressants, antiarrythmics, beta-adrenoceptor antagonists, anti-diarrheals, 5-HT3 receptor antagonists such as ondansetron, and aluminum antacids.[15][23] Certain calcium channel blockers such as nifedipine and verapamil can cause severe constipation due to dysfunction of motility in the rectosigmoid colon.[24] Supplements such as calcium and iron supplements can also have constipation as a notable side effect.[citation needed]

Systemic diseases that may present with constipation include celiac disease and systemic sclerosis.[5][20][25]

Spinal cord lesions and neurological disorders such as Parkinson's disease and pelvic floor dysfunction[16] can also lead to constipation.

A number of diseases present at birth can result in constipation in children. They are as a group uncommon with Hirschsprung's disease (HD) being the most common.[30] There are also congenital structural anomalies that can lead to constipation, including anterior displacement of the anus, imperforate anus, strictures, and small left colon syndrome.[31] 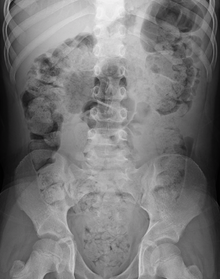 The diagnosis is typically made based on a person's description of the symptoms. Bowel movements that are difficult to pass, very firm, or made up of small hard pellets (like those excreted by rabbits) qualify as constipation, even if they occur every day. Constipation is traditionally defined as three or fewer bowel movements per week.[13] Other symptoms related to constipation can include bloating, distension, abdominal pain, headaches, a feeling of fatigue and nervous exhaustion, or a sense of incomplete emptying.[32] Although constipation may be a diagnosis, it is typically viewed as a symptom that requires evaluation to discern a cause.

Distinguish between acute (days to weeks) or chronic (months to years) onset of constipation because this information changes the differential diagnosis. This in the context of accompanied symptoms help physicians discover the cause of constipation. People often describe their constipation as bowel movements that are difficult to pass, firm stool with lumpy or hard consistency, and excessive straining during bowel movements. Bloating, abdominal distension, and abdominal pain often accompany constipation.[33] Chronic constipation (symptoms present at least three days per month for more than three months) associated with abdominal discomfort is often diagnosed as irritable bowel syndrome (IBS) when no obvious cause is found.[34]

Separating non-life-threatening from serious causes may be partly based on symptoms. For example, colon cancer may be suspected if a person has a family history of colon cancer, fever, weight loss, and rectal bleeding.[13] Other alarming signs and symptoms include family or personal history of inflammatory bowel disease, age of onset over 50, change in stool caliber, nausea, vomiting, and neurological symptoms like weakness, numbness and difficulty urinating.[33]

Functional constipation is common and does not warrant diagnostic testing. Imaging and laboratory tests are typically recommended for those with alarm signs or symptoms.[13]

Abdominal X-rays are generally only performed if bowel obstruction is suspected, may reveal extensive impacted fecal matter in the colon, and may confirm or rule out other causes of similar symptoms.[22][15]

Colonic propagating pressure wave sequences (PSs) are responsible for discrete movements of the bowel contents and are vital for normal defecation. Deficiencies in PS frequency, amplitude, and extent of propagation are all implicated in severe defecatory dysfunction (SDD). Mechanisms that can normalize these aberrant motor patterns may help rectify the problem. Recently the novel therapy of sacral nerve stimulation (SNS) has been utilized for the treatment of severe constipation.[35]

The Rome III Criteria for functional constipation must include two or more of the following and present for the past three months, with symptoms starting for at least 6 months prior to diagnosis.[13]

Constipation is usually easier to prevent than to treat. Following the relief of constipation, maintenance with adequate exercise, fluid intake, and high-fiber diet is recommended.[15]

A limited number of causes require urgent medical intervention or will result in severe consequences.[3]

The treatment of constipation should focus on the underlying cause if known. The National Institute of Health and Care Excellence (NICE) break constipation in adults into two categories - chronic constipation of unknown cause and constipation due to opiates.[36]

In chronic constipation of unknown cause, the main treatment involves the increased intake of water and fiber (either dietary or as supplements).[16] The routine use of laxatives or enemas is discouraged, as having bowel movements may come to be dependent upon their use.[citation needed]

If laxatives are used, milk of magnesia, polyethylene glycol, or senna are recommended as first-line agents due to their low cost and safety.[3][37] Some recommend that stimulant laxatives should only be used if this is not effective.[16] In cases of chronic constipation, polyethylene glycol appears superior to lactulose.[38] Prokinetics may be used to improve gastrointestinal motility. A number of new agents have shown positive outcomes in chronic constipation; these include prucalopride[39] and lubiprostone.[40] Cisapride is widely available in third world countries, but has been withdrawn in most of the west. It has not been shown to have a benefit on constipation, while potentially causing cardiac arrhythmias and deaths.[41]

Enemas can be used to provide a form of mechanical stimulation. A large volume or high enema[42] can be given to cleanse as much of the colon as possible of feces,[43][44] and the solution administered commonly contains castile soap which irritates the colon's lining resulting in increased urgency to defecate.[45] However, a low enema is generally useful only for stool in the rectum, not in the intestinal tract.[46]

Constipation that resists the above measures may require physical intervention such as manual disimpaction (the physical removal of impacted stool using the hands; see fecal impaction). Regular exercise can help improve chronic constipation.[47]

In refractory cases, procedures can be performed to help relieve constipation. Sacral nerve stimulation has been demonstrated to be effective in a minority of cases. Colectomy with ileorectal anastomosis is another intervention performed only in patients known to have a slow colonic transit time and in whom a defecation disorder has either been treated or is not present.[3] Because this is a major operation, side effects can include considerable abdominal pain, small bowel obstruction, and post-surgical infections. Furthermore, it has a very variable rate of success and is very case dependent.[29]

Constipation is the most common chronic gastrointestinal disorder in adults. Depending on the definition employed, it occurs in 2% to 20% of the population.[16][50] It is more common in women, the elderly and children.[50] Specifically constipation with no known cause affects females more often affected than males.[51] The reasons it occurs more frequently in the elderly is felt to be due to an increasing number of health problems as humans age and decreased physical activity.[17] 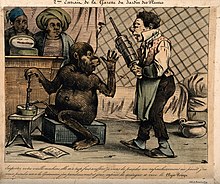 19th century satirical cartoon of a monkey rejecting an old style clyster for a new design, filled with marshmallow and opium

Since ancient times different societies have published medical opinions about how health care providers should respond to constipation in patients.[53] In various times and places, doctors have made claims that constipation has all sorts of medical or social causes.[53] Doctors in history have treated constipation in reasonable and unreasonable ways, including use of a spatula mundani.[53]

After the advent of the germ theory of disease then the idea of "auto-intoxication" entered popular Western thought in a fresh way.[53] Enema as a scientific medical treatment and colon cleansing as alternative medical treatment became more common in medical practice.[53]

Since the 1700s in the West there has been some popular thought that people with constipation have some moral failing with gluttony or laziness.[54]

Approximately 3% of children have constipation, with girls and boys being equally affected.[31] With constipation accounting for approximately 5% of general pediatrician visits and 25% of pediatric gastroenterologist visits, the symptom carries a significant financial impact upon the healthcare system.[8] While it is difficult to assess an exact age at which constipation most commonly arises, children frequently suffer from constipation in conjunction with life-changes. Examples include: toilet training, starting or transferring to a new school, and changes in diet.[8] Especially in infants, changes in formula or transitioning from breast milk to formula can cause constipation. The majority of constipation cases are not tied to a medical disease, and treatment can be focused on simply relieving the symptoms.[31]

The six-week period after pregnancy is called the postpartum stage.[55] During this time, women are at increased risk of being constipated. Multiple studies estimate the prevalence of constipation to be around 25% during the first 3 months.[56] Constipation can cause discomfort for women, as they are still recovering from the delivery process especially if they have had a perineal tear or underwent an episiotomy.[57] Risk factors that increase the risk of constipation in this population include:[57]

Hemorrhoids are common in pregnancy and also may get exacerbated when constipated. Anything that can cause pain with stooling (hemorrhoids, perineal tear, episiotomy) can lead to constipation because patients may withhold from having a bowel movement so as to avoid pain.[57]

The pelvic floor muscles play an important role in helping pass a bowel movement. Injury to those muscles by some of the above risk factors (examples- delivering a large child, lengthy second stage of labor, forceps delivery) can result in constipation.[57] Enemas may be administered during labor and these can also alter bowel movements in the days after giving birth.[55] However, there is insufficient evidence to make conclusions about the effectiveness and safety of laxatives in this group of people.[57]