Common side effects include feeling tired, tremor, nausea, and constipation.[2] As amiodarone can have serious side effects, it is mainly recommended only for significant ventricular arrhythmias.[2] Serious side effects include lung toxicity such as interstitial pneumonitis, liver problems, heart arrhythmias, vision problems, thyroid problems, and death.[2] If taken during pregnancy or breastfeeding it can cause problems in the baby.[2] It is a class III antiarrhythmic medication.[2] It works partly by increasing the time before a heart cell can contract again.[2]

Amiodarone was first made in 1961 and came into medical use in 1962 for chest pain believed to be related to the heart.[4] It was pulled from the market in 1967 due to side effects.[5] In 1974 it was found to be useful for arrhythmias and reintroduced.[5] It is on the World Health Organization's List of Essential Medicines.[6] It is available as a generic medication.[2] The defined daily dose is 200mg by mouth.[1] In the developing world the wholesale cost as of 2014 ranges from just less than US$2 per month to just over US$7 per month supply.[7] In the United States a typical month supply is less than $4.[8] In 2017, it was the 196th most commonly prescribed medication in the United States, with more than two million prescriptions.[9][10] In the UK, in 2021, a one month supply of amiodarone costs the NHS less than two pounds.[11]

Defibrillation is the treatment of choice for ventricular fibrillation and pulseless ventricular tachycardia resulting in cardiac arrest. While amiodarone has been used in shock-refractory cases, evidence of benefit is poor.[3] Amiodarone does not appear to improve survival or positive outcomes in those who had a cardiac arrest.[13]

Amiodarone may be used in the treatment of ventricular tachycardia in certain instances. Individuals with hemodynamically unstable ventricular tachycardia should not initially receive amiodarone. These individuals should be cardioverted.[14] Once the heart rhythm is regulated, amiodarone may be used to stabilise the heart, particularly if there is also heart failure.[14]

In the first few days after open heart surgery people are at an increased risk of developing an irregular heartbeat, atrial fibrillation (AF).[16] In the ARCH trial, intravenous amiodarone (2 g administered over 2 d) was shown to reduce the incidence of AF after open heart surgery when compared to placebo.[17] However, other clinical studies have differed and failed to demonstrate long-term efficacy and have shown potentially fatal side effects such as pulmonary toxicities.[16][17] It is sometimes given peri-operatively to prevent the irregular heartbeat.[16] While amiodarone is not approved for AF by the FDA, it is a commonly prescribed off-label treatment due to the lack of equally effective treatment alternatives.

So-called 'acute onset atrial fibrillation', defined by the North American Society of Pacing and Electrophysiology (NASPE) in 2003, responds well to short duration treatment with amiodarone. This has been demonstrated in seventeen randomized controlled trials, of which five included a placebo arm. The incidence of severe side effects in this group is low.

The benefit of amiodarone in the treatment of atrial fibrillation in the critical care population has yet to be determined but it may prove to be the agent of choice where the patient is hemodynamically unstable and unsuitable for DC cardioversion. It is recommended in such a role by the UK government's National Institute for Health and Clinical Excellence (NICE).[18]

It is contraindicated in individuals with sinus nodal bradycardia, atrioventricular block, and second or third degree heart block who do not have an artificial pacemaker.

Individuals with baseline depressed lung function should be monitored closely if amiodarone therapy is to be initiated.

Formulations of amiodarone that contain benzyl alcohol should not be given to neonates, because the benzyl alcohol may cause the potentially fatal "gasping syndrome".[19]

Amiodarone can worsen the cardiac arrhythmia brought on by digitalis toxicity.

Amiodarone has numerous side effects. Most individuals administered amiodarone on a chronic basis will experience at least one side effect.[citation needed] 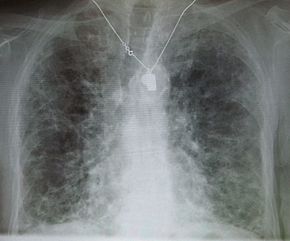 A chest X-ray demonstrating pulmonary fibrosis due to amiodarone.

Side effects of amiodarone include various pulmonary effects.[20] The most serious reaction that is due to amiodarone is interstitial lung disease. Risk factors include high cumulative dose, more than 400 milligrams per day, duration over two months, increased age, and preexisting pulmonary disease. Some individuals were noted to develop pulmonary fibrosis after a week of treatment, while others did not develop it after years of continuous use. Common practice is to avoid the agent if possible in individuals with decreased lung function.

The most specific test of pulmonary toxicity due to amiodarone is a dramatically decreased DLCO noted on pulmonary function testing.

Amiodarone is structurally similar to thyroxine and also contains iodine. Both of these contribute to the effects of amiodarone on thyroid function. Induced abnormalities in thyroid function are common. Both under- and overactivity of the thyroid may occur.[11][21] Amiodarone also causes an anti-thyroid action, via Wolff–Chaikoff effect, due its large amount of iodine in its molecule, which causes a particular "cardiac hypothyroidism" with bradycardia and arrhythmia.[22][23]

Thyroid function should be checked at least every six months.[24]

Thyroid uptake measurements (I-123 or I-131), which are used to differentiate causes of hyperthyroidism, are generally unreliable in patients who have been taking amiodarone. Because of the high iodine content of amiodarone, the thyroid gland is effectively saturated, thus preventing further uptake of isotopes of iodine. However, the radioactive iodine uptake (nuclear thyroid uptake test) may still be helpful in the diagnosis and management of amiodarone-induced hyperthyroidism.[citation needed]

Corneal micro-deposits (cornea verticillata,[26] also called vortex or whorl keratopathy) are almost universally present (over 90%) in individuals taking amiodarone longer than 6 months, especially doses greater than 400 mg/day. These deposits typically do not cause any symptoms. About 1 in 10 individuals may complain of a bluish halo. Anterior subcapsular lens deposits are relatively common (50%) in higher doses (greater than 600 mg/day) after 6 months of treatment. Optic neuropathy, nonarteritic anterior ischemic optic neuropathy (N-AION), occurs in 1-2% of people and is not dosage dependent.[27] Bilateral optic disc swelling and mild and reversible visual field defects can also occur. Loss of eyelashes has been linked to amiodarone use.[28]

Abnormal liver enzyme results are common in patients on amiodarone. Much rarer are jaundice, hepatomegaly (liver enlargement), and hepatitis (inflammation of the liver).[29]

Low-dose amiodarone has been reported to cause pseudo-alcoholic cirrhosis.[30][31]

Long-term administration of amiodarone (usually more than eighteen months) is associated with a light-sensitive blue-grey discoloration of the skin, sometimes called ceruloderma; such patients should avoid exposure to the sun and use sunscreen that protects against ultraviolet-A and -B. The discoloration will slowly improve upon cessation of the medication, however, the skin color may not return completely.[32]

Use during pregnancy may result in a number of problems in the baby including thyroid problems, heart problems, neurological problems, and preterm birth.[33] Use during breastfeeding is generally not recommended though one dose may be okay.[33]

Long-term use of amiodarone has been associated with peripheral neuropathies.[34]

Amiodarone is sometimes responsible for epididymitis. Amiodarone accumulates in the head of the organ and can cause unilateral or bilateral inflammation. It tends to resolve if amiodarone is stopped.[35]

Some cases of gynecomastia have been reported with men on amiodarone.[36]

A study published in 2013 showed a possible association between amiodarone and an increased risk of cancer, especially in males, with a dose-dependent effect.[37]

Amiodarone's long half life allows drug interactions to potentially last for many months even after the treatment has stopped.[38] The pharmacokinetics of numerous drugs, including many that are commonly administered to individuals with heart disease, are affected by amiodarone.[38] Particularly, doses of digoxin should be halved in individuals taking amiodarone. Amiodarone may also interact with sotalol.[39]

The effect of amiodarone on the warfarin concentrations can be as early as a few days after initiation of treatment; however, the interaction may not peak for up to seven weeks.

Amiodarone inhibits the action of the cytochrome P450 isozyme family. This reduces the clearance of many drugs, including the following:

In 2015, Gilead Sciences warned health care providers about people that began taking the hepatitis C drugs ledipasvir/sofosbuvir or sofosbuvir along with amiodarone, who developed abnormally slow heartbeats or died of cardiac arrest.[40]

Amiodarone is categorized as a class III antiarrhythmic agent, and prolongs phase 3 of the cardiac action potential, the repolarization phase where there is normally decreased calcium permeability and increased potassium permeability. It has numerous other effects, however, including actions that are similar to those of antiarrhythmic classes Ia, II, and IV.

It also shows beta blocker-like and calcium channel blocker-like actions on the SA and AV nodes, increases the refractory period via sodium- and potassium-channel effects, and slows intra-cardiac conduction of the cardiac action potential, via sodium-channel effects. It is suggested that amiodarone may also exacerbate the phenotype associated with Long QT-3 syndrome causing mutations such as ∆KPQ. This effect is due to a combination of blocking the peak sodium current, but also contributing to an increased persistent sodium current.[44]

Amiodarone chemically resembles thyroxine (thyroid hormone), and its binding to the nuclear thyroid receptor might contribute to some of its pharmacologic and toxic actions.[45]

On August 8, 2008, the FDA issued a warning of the risk of rhabdomyolysis, which can lead to kidney failure or death, when simvastatin is used with amiodarone. This interaction is dose-dependent with simvastatin doses exceeding 20 mg. This drug combination especially with higher doses of simvastatin should be avoided.[46]

The original observation that amiodarone's progenitor molecule, khellin, had cardioactive properties, was made by the Russian physiologist Gleb von Anrep while working in Cairo in 1946.[47] Khellin is obtained from a plant extract of Khella or Ammi visnaga, a common plant in north Africa. Anrep noticed that one of his technicians had been cured of anginal symptoms after taking khellin, then used for various, non-cardiac ailments. This led to efforts by European pharmaceutical industries to isolate an active compound.[citation needed] Amiodarone was initially developed in 1961 at the Labaz company, Belgium, by chemists Tondeur and Binon, who were working on preparations derived from khellin. It became popular in Europe as a treatment for angina pectoris.[48][49]

As a doctoral candidate at Oxford University, Bramah Singh determined that amiodarone and sotalol had antiarrhythmic properties and belonged to a new class of antiarrhythmic agents (what would become the class III antiarrhythmic agents).[50] Today the mechanisms of action of amiodarone and sotalol have been investigated in more detail. Both drugs have been demonstrated to prolong the duration of the action potential, prolonging the refractory period, by interacting among other cellular function with K+ channels.

Based on Singh's work, the Argentinian physician Mauricio Rosenbaum began using amiodarone to treat his patients who suffered from supraventricular and ventricular arrhythmias, with impressive results. Based on papers written by Rosenbaum developing Singh's theories, physicians in the United States began prescribing amiodarone to their patients with potentially life-threatening arrhythmias in the late 1970s.[51][52] By 1980, amiodarone was commonly prescribed throughout Europe for the treatment of arrhythmias, but in the U.S. amiodarone remained unapproved by the Food and Drug Administration, and physicians were forced to directly obtain amiodarone from pharmaceutical companies in Canada and Europe.[citation needed]

The FDA was reluctant to officially approve the use of amiodarone since initial reports had shown increased incidence of serious pulmonary side-effects of the drug. In the mid-1980s, the European pharmaceutical companies began putting pressure on the FDA to approve amiodarone by threatening to cut the supply to American physicians if it was not approved. In December 1985, amiodarone was approved by the FDA for the treatment of arrhythmias.[53] This makes amiodarone one of the few drugs approved by the FDA without rigorous randomized clinical trials.[citation needed]

Amiodarone may be an acronym for its IUPAC name[54] (2-butyl-1-benzofuran-3-yl)-[4-[2-(diethylamino)ethoxy]-3,5-diiodophenyl]methanone[citation needed], where ar is a placeholder for phenyl. This is partially supported by dronedarone which is noniodinated benzofuran derivative of amiodarone, where the arylmethanone is conserved.

The dose of amiodarone administered is tailored to the individual and the dysrhythmia that is being treated. When administered orally, the bioavailability of amiodarone is quite variable. Absorption ranges from 22 to 95%, with better absorption when it is given with food.[56]