Crofelemer, sold under the brand name Mytesi, is a medication used to treat diarrhea in people on treatment for HIV.[2] It should not be used for cases due to infection.[1] It is taken by mouth.[2]

Side effects are generally mild.[1] They may include intestinal gas, nausea, constipation, and cough.[1] Safety in pregnancy is unclear.[3] It is believed to work by blocking cystic fibrosis transmembrane conductance regulator (CFTR) and calcium-activated chloride channels in the intestines.[1]

Crofelemer treats the symptoms of disease, but it is not used to treat infectious diarrhea (diarrhea caused by infection of the digestive system by a bacterium, virus or parasite).

The drug is taken by mouth and works by voltage-independently blocking two structurally unrelated chloride channels in the gut, namely the cystic fibrosis transmembrane conductance regulator (CFTR) with an in vitro maximum inhibition of about 60%, and the calcium-activated chloride channel anoctamin 1, with a maximum inhibition of over 90%.[5] This is a hitherto undescribed mechanism of action. As a result of the channel inhibition, fewer chloride ions are excreted into the gut, which also decreases the excretion of sodium ions and water, improving stool consistency and reducing duration of the diarrhea.[6][7] The mechanism seems to be selective as other channels involved in intestinal fluid secretion, namely sodium and potassium channels, are not affected by crofelemer, nor is cAMP or calcium signalling.[5]

The substance is hardly, if at all, absorbed from the gut into the bloodstream, and is consequently excreted with the stool.[7]

Crofelemer seems to be well tolerated; the only adverse effects found in clinical studies were mild gastrointestinal effects at the same level as under placebo.[7] Studies regarding interactions with other drugs are still to be conducted. 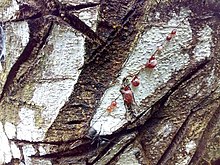 Croton lechleri bark with a few drops of dragon's blood

It is a botanical drug.[8] The substance is a purified oligomeric proanthocyanidin from the sap, or more correctly the latex, of the South American tree Croton lechleri (locally called Sangre de Grado or Sangre de Drago). This is one of several plants producing bright red latex or resin called "dragon's blood".[5] Crofelemer is a complex mixture of procyanidins and prodelphinidins with up to 30 (epi)catechin or (epi)gallocatechin units per molecule, resulting in a molecular mass of up to 9 kDa.[5]

The latex of C. lechleri is traditionally used in South American medicine for the treatment of diarrhea, wounds, inflammations, tumours, insect bites, and other conditions.[5][9] A number of chemicals were isolated in the late 1980s and 1990s and tested in cellular and animal models, for example identifying taspine as a cicatrizant (wound healing promoter).[10] Immunomodulatory, antioxidative, antiproliferative and mutagenic effects of dragon's blood and its components also received some attention from the scientific community. The purified proanthocyanidin fraction was first described in 1994 under the name SP-303 as an antiviral substance,[11] but a study testing it for the treatment of herpes simplex was not successful.[12] In 1999 the drug was reported to improve the symptoms of cholera toxin induced diarrhea in mice.[13]

SP-303 was eventually named crofelemer and patented by Napo Pharmaceuticals, which licensed it to Glenmark Pharmaceuticals in 2005, for exclusive development and marketing rights in 140 emerging markets including India,[14] and to Salix Pharmaceuticals for exclusive development and marketing rights in North America, the European Union and Japan, in 2008.[15] Subsequently, Napo sued Salix and terminated the agreements with Salix and Glenmark in 2011, alleging that they were stalling the drug's development.[16] As of October 2012[update], crofelemer has completed a Phase III trial and was approved in December 2012 by the FDA for the indication "symptomatic relief of non-infectious diarrhea in patients with HIV/AIDS on anti-retroviral therapy".[17][18]