Flunitrazepam, also known as Rohypnol among other names, is a benzodiazepine which has been used to treat trouble sleeping and to assist with anesthesia.[3][4] It is not an initially recommended treatment and is only recommended for short-term use.[3][5]

Side effects include a risk of abuse, night time eating, confusion, and withdrawal symptoms if stopped suddenly after long term use.[3][6][7] In high doses decreased efforts to breath and death may result.[7] After prolonged use the medication needs to be slowly stopped.[7]

Flunitrazepam was patented in 1962 and came into medical use in 1974.[8] It not legally available in the United States, Australia, and New Zealand and is restricted in parts of Europe.[6] It has been referred to as a date rape drug,[9][10] though the percentage of reported rape cases in which it is involved is small.[11]

In countries where this drug is used, it is used for treatment of severe cases of sleeping problems, and in some countries as a preanesthetic agent.[3][12] These were also the uses for which it was originally studied.[13]

Side effects of flunitrazepam include dependency, both physical and psychological; reduced sleep quality resulting in sleepiness; and overdose, resulting in excessive sedation, impairment of balance and speech, respiratory depression or coma, and possibly death. Because of the latter, flunitrazepam is commonly used in suicide. When used in late pregnancy, it might cause hypotonia of the foetus.

Flunitrazepam, as with other benzodiazepines, can lead to drug dependence.[14] Discontinuation may result in the appearance of withdrawal symptoms, known as benzodiazepine withdrawal syndrome. It is characterised by seizures, psychosis, insomnia, and anxiety. Rebound insomnia, worse than baseline insomnia, typically occurs after discontinuation of flunitrazepam even from short-term single nightly dose therapy.[15]

Flunitrazepam may cause a paradoxical reaction in some individuals causing symptoms including anxiety, aggressiveness, agitation, confusion, disinhibition, loss of impulse control, talkativeness, violent behavior, and even convulsions. Paradoxical adverse effects may even lead to criminal behaviour.[16]

Benzodiazepines such as flunitrazepam are lipophilic and rapidly penetrate membranes and, therefore, rapidly cross over into the placenta with significant uptake of the drug. Use of benzodiazepines including flunitrazepam in late pregnancy, especially high doses, may result in hypotonia, also known as floppy baby syndrome.[17]

Flunitrazepam impairs cognitive functions. This may appear as lack of concentration, confusion and anterograde amnesia—the inability to create memories while under the influence. It can be described as a hangover-like effect which can persist to the next day.[18] It also impairs psychomotor functions similar to other benzodiazepines and nonbenzodiazepine hypnotic drugs; falls and hip fractures were frequently reported. The combination with alcohol increases these impairments. Partial, but incomplete tolerance develops to these impairments.[19]

Other side effects include:

Benzodiazepines require special precaution if used in the elderly, during pregnancy, in children, in alcohol- or drug-dependent individuals, and in individuals with comorbid psychiatric disorders.[20]

Impairment of driving skills with a resultant increased risk of road traffic accidents is probably the most important adverse effect. This side-effect is not unique to flunitrazepam but also occurs with other hypnotic drugs. Flunitrazepam seems to have a particularly high risk of road traffic accidents compared to other hypnotic drugs. Extreme caution should be exercised by drivers after taking flunitrazepam.[21][22]

The use of flunitrazepam in combination with alcoholic beverages synergizes the adverse effects, and can lead to toxicity and death.[11]

Flunitrazepam is a drug that is frequently involved in drug intoxication, including overdose.[23][24] Overdose of flunitrazepam may result in excessive sedation, or impairment of balance or speech. This may progress in severe overdoses to respiratory depression or coma and possibly death. The risk of overdose is increased if flunitrazepam is taken in combination with CNS depressants such as ethanol (alcohol) and opioids. Flunitrazepam overdose responds to the GABAA receptor antagonist flumazenil, which thus can be used as a treatment.

As of 2016, blood tests can identify flunitrazepam at concentrations of as low as 4 nanograms per millilitre; the elimination half life of the drug is 11–25 hours. For urine samples, metabolites can be identified for 60 hours to 28 days, depending on the dose and analytical method used. Hair and saliva can also be analyzed; hair is useful when a long time has transpired since ingestion, and saliva for workplace drug tests.[25]

Flunitrazepam can be measured in blood or plasma to confirm a diagnosis of poisoning in hospitalized patients, provide evidence in an impaired driving arrest, or assist in a medicolegal death investigation. Blood or plasma flunitrazepam concentrations are usually in a range of 5–20 μg/L in persons receiving the drug therapeutically as a nighttime hypnotic, 10–50 μg/L in those arrested for impaired driving and 100–1000 μg/L in victims of acute fatal overdosage. Urine is often the preferred specimen for routine drug abuse monitoring purposes. The presence of 7-aminoflunitrazepam, a pharmacologically-active metabolite and in vitro degradation product, is useful for confirmation of flunitrazepam ingestion. In postmortem specimens, the parent drug may have been entirely degraded over time to 7-aminoflunitrazepam.[26][27][28] Other metabolites include desmethylflunitrazepam and 3-hydroxydesmethylflunitrazepam.

The main pharmacological effects of flunitrazepam are the enhancement of GABA, an inhibitory neurotransmitter, at various GABA receptors.[11]

While 80% of flunitrazepam that is taken orally is absorbed, bioavailability in suppository form is closer to 50%.[29]

Flunitrazepam has a long half-life of 18–26 hours, which means that flunitrazepam's effects after nighttime administration persist throughout the next day.[18]

Flunitrazepam is lipophilic and is metabolised by the liver via oxidative pathways. The enzyme CYP3A4 is the main enzyme in its phase 1 metabolism in human liver microsomes.[30]

Flunitrazepam was discovered at Roche as part of the benzodiazepine work led by Leo Sternbach; the patent application was filed in 1962 and it was first marketed in 1974.[32][33]

Due to abuse of the drug for date rape and recreation, in 1998 Roche modified the formulation to give lower doses, make it less soluble, and add a blue dye for easier detection in drinks.[25] It was never marketed in the United States, and by 2016 had been withdrawn from the markets in Spain, France, Norway, Germany, and the United Kingdom.[25] 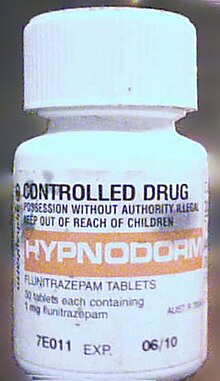 Flunitrazepam and other sedative hypnotic drugs are detected frequently in cases of people suspected of driving under the influence of drugs. Other benzodiazepines and nonbenzodiazepines (anxiolytic or hypnotic) such as zolpidem and zopiclone (as well as cyclopyrrolones, imidazopyridines, and pyrazolopyrimidines) are also found in high numbers of suspected drugged drivers. Many drivers have blood levels far exceeding the therapeutic dose range, suggesting a high degree of abuse potential for benzodiazepines and similar drugs.[35]

Flunitrazepam is known to induce anterograde amnesia in sufficient doses; individuals are unable to remember certain events that they experienced while under the influence of the drug, which complicates investigations.[39][40] This effect could be particularly dangerous if flunitrazepam is used to aid in the commission of sexual assault; victims may be unable to clearly recall the assault, the assailant, or the events surrounding the assault.[25]

While use of flunitrazepam in sexual assault has been prominent in the media, as of 2015 appears to be fairly rare, and use of alcohol and other benzodiazepine drugs in date rape appears to be a larger but underreported problem.[11]

In the United Kingdom, the use of flunitrazepam and other "date rape" drugs have also been connected to stealing from sedated victims. An activist quoted by a British newspaper estimated that up to 2,000 individuals are robbed each year after being spiked with powerful sedatives,[41] making drug-assisted robbery a more commonly reported problem than drug-assisted rape.

Flunitrazepam is a Schedule III drug under the international Convention on Psychotropic Substances of 1971.[42]

Flunitrazepam is marketed under many brand names in the countries where it is legal.[1] It also has many street names, including "roofie" and "ruffie".[14]