Ketorolac, sold under the brand name Toradol among others, is a nonsteroidal anti-inflammatory drug (NSAID) used to treat pain.[2] Specifically it is recommended for moderate to severe pain.[3] Recommended duration of treatment is less than six days.[2] It is used by mouth, by nose, by injection into a vein or muscle, and as eye drops.[2][3] Effects begin within an hour and last for up to eight hours.[2]

Common side effects include sleepiness, dizziness, abdominal pain, swelling, and nausea.[2] Serious side effects may include stomach bleeding, kidney failure, heart attacks, bronchospasm, heart failure, and anaphylaxis.[2] Use is not recommended during the last part of pregnancy or during breastfeeding.[2] Ketorolac works by blocking cyclooxygenase 1 and 2 (COX1 and COX2), thereby decreasing production of prostaglandins.[2][4]

Ketorolac was patented in 1976 and approved for medical use in 1989.[5][2] It is available as a generic medication.[3] In the United Kingdom it costs the NHS less than £1 per injectable dose as of 2019.[3] In the United States the wholesale cost of this amount is about US$1.50.[6] In 2017, it was the 271st most commonly prescribed medication in the United States, with more than one million prescriptions.[7][8] 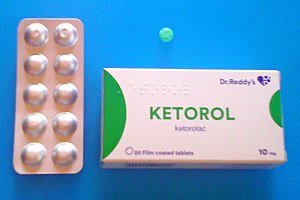 Ketorolac is used for short-term management of moderate to severe pain.[9] It is usually not prescribed for longer than five days,[10][11][12][13] due to its potential to cause kidney damage.[14]

Ketorolac is effective when administered with paracetamol to control pain in newborns because it does not depress respiration as do opioids.[15] Ketorolac is also an adjuvant to opioid medications and improves pain relief. It is also used to treat dysmenorrhea.[13] Ketorolac is used to treat idiopathic pericarditis, where it reduces inflammation.[16]

Ketorolac is also used as an eye drop. It can be given during eye surgery to help with pain,[17] and is effective in treating ocular itching.[18] The eye drops are associated with decreased development of macular edema after cataract surgery, and is more effective alone than as an opioid/ketorolac combination treatment.[19][20] Ketorolac eye drops have also been used to manage pain from corneal abrasions.[21]

During treatment with ketorolac, clinicians monitor for the manifestation of adverse effects. Lab tests, such as liver function tests, bleeding time, BUN, serum creatinine and electrolyte levels are often used and help to identify potential complications.[10][11]

The defined daily dose is 30 mg by mouth or by injection.[1]

Ketorolac is contraindicated in those with hypersensitivity, allergies to the medication, cross-sensitivity to other NSAIDs, prior to surgery, history of peptic ulcer disease, gastrointestinal bleeding, alcohol intolerance, renal impairment, cerebrovascular bleeding, nasal polyps, angioedema, and asthma.[10][11] Recommendations exist for cautious use of ketorolac in those who have experienced cardiovascular disease, myocardial infarction, stroke, heart failure, coagulation disorders, renal impairment, and hepatic impairment.[10][11]

Though uncommon, potentially fatal adverse effects include stroke, myocardial infarction, GI bleeding, Stevens–Johnson syndrome, toxic epidermal necrolysis and anaphylaxis. In terms of safety, ketorolac has been assessed to be a relatively higher-risk NSAID when compared to aceclofenac, celecoxib, and ibuprofen.[16]

Like all NSAIDs, ketorolac can cause premature constriction of the ductus arteriosus in the infant if taken by the mother during the third trimester of pregnancy.[10][11]

Ketorolac can interact with other medications. Probenecid can increase the probability of having an adverse reaction when taken with ketorolac. Pentoxifylline can increase the risk of bleeding. When aspirin is taken at the same time as ketorolac, the effectiveness is decreased. Problematic GI effects are additive and become more likely if potassium supplements, aspirin, other NSAIDs, corticosteroids, or alcohol is taken at the same time. The effectiveness of antihypertensives and diuretics can be lowered. The use of ketorolac can increase serum lithium levels to the point of toxicity. Toxicity to methotrexate is more likely if ketorolac is taken at the same time. The risk of bleeding increases with the concurrent medications clopidogrel, cefoperazone, valproic acid, cefotetan, eptifibatide, tirofiban, and ticlopidine. Anticoagulants and thrombolytic medications also increase the likelihood of bleeding. Medications used to treat cancer can interact with ketorolac along with radiation therapy. The risk of toxicity to the kidneys increases when ketorolac is taken with cyclosporine.[10][11]

Interactions with ketorolac also exist with some herbal supplements. The use of Panax ginseng, clove, ginger, arnica, feverfew, dong quai, chamomile, and Ginkgo biloba increases the risk of bleeding.[10][11]

In the US, ketorolac is the only widely available intravenous NSAID. An IV form of paracetamol, which is not an NSAID, became available in Europe in 2009 and then in the US.[15]

In 2007, there were concerns about the high incidence of reported side effects. This led to restriction in its dosage and maximum duration of use. In the UK, treatment was initiated only in a hospital, although this was not designed to exclude its use in prehospital care and mountain rescue settings.[9] Dosing guidelines were published at that time.[25]

Concerns over the high incidence of reported side effects with ketorolac trometamol led to its withdrawal (apart from the ophthalmic formulation) in several countries, while in others its permitted dosage and maximum duration of treatment have been reduced. From 1990 to 1993, 97 reactions with a fatal outcome were reported worldwide.[26]

An intranasal formulation (Sprix) was approved by the FDA in 2010[28] for short-term management of moderate to moderately severe pain requiring analgesia at the opioid level.

Ketorolac has also been used in collegiate and professional sports, and is reported to be routinely used in the National Football League and National Hockey League. Competitive sports athletes, particularly in contact sports, are often required to play through injuries.[29] In the late 1990s opioids and their associated pharmaceutical companies came under fire.[30] Then sporting leagues began to push back against team physicians giving them to players attempting to play through injuries as it was clear that numbing the pain during practice/competition only furthered injuries.[31] Resultantly teams moved to using ketorolac as the drug is certainly powerful enough to numb players pain, but ketorolac is not a commonly abused drug with a bad reputation. Furthermore, ketorolac is a NSAID which are generally considered safe by those without a background in pharmacology as they are associated with more mild drugs such as aspirin/ibuprofen.[32] Only recently has this issue been addressed, with researchers speaking out and making recommendations[33] and a lawsuit against the National Football League in 2017.[34]