Typical antipsychotics are a class of medication of the antipsychotic type.[3] They are primarily used for agitation, schizophrenia, bipolar, and nausea.[2] Other uses may include hiccups.[2] They can be taken by mouth or used by injection.[3] Long acting injectable formulations are also available.[3]

Side effects may include involuntary movement disorders, including tardive dyskinesia, sleepiness, low blood pressure, and sexual dysfunction.[2] Other serious side effects may include neuroleptic malignant syndrome and QT prolongation.[2] They cause less weight gain and diabetes than atypical antipsychotics.[3] In dementia they increase the risk of death.[2] They are believed to work by blocking receptors in the brain for dopamine.[2]

They were first developed in the 1950s with chlorpromazine.[4] They are available as generic medication and are generally relatively inexpensive.[2] Some of the long acting injectable formulations are more expensive.[2]

Traditional antipsychotics are classified as high-potency, mid-potency, or low-potency based on their potency for the D2 receptor:

Prochlorperazine and pimozide are less commonly used to treat psychotic states, and so are sometimes excluded from this classification.[5]

A related concept to D2 potency is the concept of "chlorpromazine equivalence", which provides a measure of the relative effectiveness of antipsychotics.[6][7] The measure specifies the amount (mass) in milligrams of a given drug that must be administered in order to achieve desired effects equivalent to those of 100 milligrams of chlorpromazine.[8] Another method is "defined daily dose" (DDD), which is the assumed average dose of an antipsychotic that an adult would receive during long-term treatment.[8] DDD is primarily used for comparing the utilization of antipsychotics (e.g. in an insurance claim database), rather than comparing therapeutic effects between antipsychotics.[8] Maximum dose methods are sometimes used to compare between antipsychotics as well.[8] It is important to note that these methods do not generally account for differences between the tolerability (i.e. the risk of side effects) or the safety between medications.[8]

For a list of typical antipsychotics organized by potency, see below:

Where: † indicates products that have since been discontinued.[9]

Some typical antipsychotics have been formulated as a long-acting injectable (LAI), or "depot", formulation. Depot injections are also used on persons under involuntary commitment to force compliance with a court treatment order when the person would refuse to take daily oral medication. This has the effect of dosing a person who doesn't consent to take the drug. The United Nations Special Rapporteur On Torture has classified this as a human rights violation and cruel or inhuman treatment.[10]

The first LAI antipsychotics (often referred to as simply "LAIs") were the typical antipsychotics fluphenazine and haloperidol.[11] Both fluphenazile and haloperidol are formulated as decanoates, referring to the attachment of a decanoic acid group to the antipsychotic molecule.[11] These are then dissolved in an organic oil.[11] Together, these modifications prevent the active medications from being released immediately upon injection, attaining a slow release of the active medications (note, though, that the fluphenazine decanoate product is unique for reaching peak fluphenazine blood levels within 24 hours after administration[12]).[11] Fluphenazine decanoate can be administered every 7 to 21 days (usually every 14 to 28 days),[12] while haloperidol decanoate can be administered every 28 days, though some people receive more or less frequent injections.[11] If a scheduled injection of either haloperidol decanoate or fluphenazine decanoate is missed, recommendations for administering make-up injectable dose(s) or providing antipsychotics to be taken by mouth vary by, e.g., how long ago the last injection was and how many previous injections the person has received (i.e., if steady state levels of the medication have been reached or not).[12] 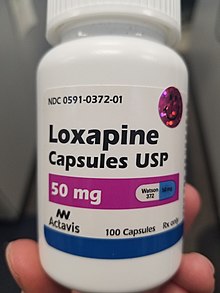 Side effects vary among the various agents in this class of medications, but common effects include: dry mouth, muscle stiffness, muscle cramping, tremors, EPS and weight gain. EPS refers to a cluster of symptoms consisting of akathisia, parkinsonism, and dystonia. Anticholinergics such as benztropine and diphenhydramine are commonly prescribed to treat the EPS. 4% of users develop rabbit syndrome while on typical antipsychotics.[24]

Neuroleptic malignant syndrome, or NMS, is a rare, but potentially fatal side effect of antipsychotic treatment. NMS is characterized by fever, muscle rigidity, autonomic dysfunction, and altered mental status. Treatment includes discontinuation of the offending agent and supportive care. 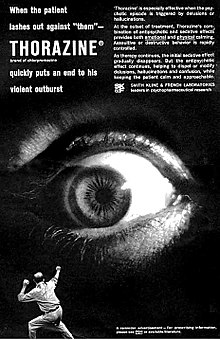 Advertisement for Thorazine (chlorpromazine) from the 1950s, reflecting the perceptions of psychosis, including the now-discredited perception of a tendency towards violence, from the time when antipsychotics were discovered[30]

The original antipsychotic drugs were happened upon largely by chance and then tested for their effectiveness. The first, chlorpromazine, was developed as a surgical anesthetic after an initial report in 1952.[23] It was first used in psychiatric institutions because of its powerful tranquilizing effect; at the time it was regarded as a non-permanent "pharmacological lobotomy".[31] (Note that "tranquilizing" here only refers to changes in external behavior, while the experience a person has internally may be one of increased agitation but inability to express it.)[32][33]

Until the 1970s there was debate within psychiatry on the most appropriate term to describe this case of medication.[34] In the late 1950s the most widely used term was "neuroleptic", followed by "major tranquilizer" and then "ataraxic".[34] The word neuroleptic was coined in 1955 by Delay and Deniker after their discovery (1952) of the antipsychotic effects of chlorpromazine.[34] It is derived from the Greek: "νεῦρον" (neuron, originally meaning "sinew" but today referring to the nerves) and "λαμβάνω" (lambanō, meaning "take hold of"). Thus, the word means taking hold of one's nerves. It was often taken to refer also to common effects such as reduced activity in general, as well as lethargy and impaired motor control. Although these effects are unpleasant and harmful, they were, along with akathisia, considered a reliable sign that the drug was working.[31] These terms have been largely replaced by the term "antipsychotic" in medical and advertising literature, which refers to the medication's more-marketable effects.[34]