From WikiProjectMed
Jump to navigation Jump to search
"Lasix" redirects here. For the method of eye surgery, see LASIK.

Furosemide, sold under the brand name Lasix among others, is a medication used to treat fluid build-up due to heart failure, liver scarring, or kidney disease.[1] It may also be used for the treatment of high blood pressure.[1] It can be taken by injection into a vein or by mouth.[1] When taken by mouth, it typically begins working within an hour, while intravenously, it typically begins working within five minutes.[1]

Common side effects include feeling lightheaded with standing, ringing in the ears, and sensitivity to light.[1] Potentially serious side effects include electrolyte abnormalities, low blood pressure, and hearing loss.[1] Blood tests are recommended regularly for those on treatment.[1] Furosemide is a type of loop diuretic that works by decreasing the reabsorption of sodium by the kidneys.[1]

Furosemide was patented in 1959 and approved for medical use in 1964.[3] It is on the World Health Organization's List of Essential Medicines.[4] The wholesale price in the developing world is between US$0.004 and US$0.02 per day.[5] In the United States, it is available as a generic medication and costs about US$0.15 per day.[1] In 2017, it was the 17th most commonly prescribed medication in the United States, with more than 30 million prescriptions.[6][7] It is on the World Anti-Doping Agency's banned drug list due to concerns that it may mask other drugs.[8] It has also been used in race horses for the treatment and prevention of exercise-induced pulmonary hemorrhage.[9][10] 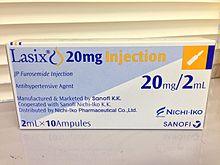 Furosemide is primarily used for the treatment of edema, but also in some cases of hypertension (where there is also kidney or heart impairment).[11] It is often viewed as a first-line agent in most people with edema caused by congestive heart failure.[1] Compared with furosemide, however, torsemide is associated with a lower risk of rehospitalization for heart failure and an improvement in New York Heart Association class of heart failure but no difference in the risk of death.[12][13] Torsemide may also be safer than furosemide.[14][15]

Furosemide is also used for liver cirrhosis, kidney impairment, nephrotic syndrome, in adjunct therapy for swelling of the brain or lungs where rapid diuresis is required (IV injection), and in the management of severe hypercalcemia in combination with adequate rehydration.[16]

In chronic kidney diseases with hypoalbuminemia, it is used along with albumin to increase diuresis. It is also used along with albumin in nephrotic syndrome to reduce edema. [18] It is mainly excreted by tubular secretion in the kidney. In kidney impairment, clearance is reduced, increasing the risk of adverse effects.[1] Lower initial doses are recommended in older people (to minimize side-effects) and high doses may be needed in kidney failure.[19] It can also cause kidney damage; this is mainly by loss of excessive fluid (i.e. dehydration), and is usually reversible.

The defined daily dose is 40 mg either by mouth or by injection.[2][20] In adults the usual starting dose by mouth is 20 mg per day.[21] This can be increased up to 80 mg twice per day until the swelling improves after which the dosage is generally reduced.[21] The injectable version is generally given at a dose of 20 mg to 80 mg in adults and 0.5 to 1 mg/kg in children and may be repeated after a couple of hours.[22]

Furosemide also can lead to gout caused by hyperuricemia. Hyperglycemia is also a common side effect.

The tendency, as for all loop diuretics, to cause low serum potassium concentration (hypokalemia) has given rise to combination products, either with potassium or with the potassium-sparing diuretic amiloride (Co-amilofruse). Other electrolyte abnormalities that can result from furosemide use include hyponatremia, hypochloremia, hypomagnesemia, and hypocalcemia.[23]

In the treatment of heart failure, many studies have shown that the long-term use of furosemide can cause varying degrees of thiamine deficiency, so thiamine supplementation is also suggested.[24]

Although disputed,[25] it is considered ototoxic: "usually with large intravenous doses and rapid administration and in renal impairment".[26]

Furosemide has potential interactions with these medications:[28]

Potentially hazardous interactions with other drugs:

Furosemide, like other loop diuretics, acts by inhibiting the luminal Na-K-Cl cotransporter in the thick ascending limb of the loop of Henle, by binding to the chloride transport channel, thus causing sodium, chloride, and potassium loss in urine.[29]

The action on the distal tubules is independent of any inhibitory effect on carbonic anhydrase or aldosterone; it also abolishes the corticomedullary osmotic gradient and blocks negative, as well as positive, free water clearance. Because of the large NaCl absorptive capacity of the loop of Henle, diuresis is not limited by development of acidosis, as it is with the carbonic anhydrase inhibitors.

The pharmacokinetics of furosemide are apparently not significantly altered by food.[42]

Furosemide is the INN and BAN.[43] The previous BAN was frusemide.

The diuretic effects are put to use most commonly in horses to prevent bleeding during a race. Sometime in the early 1970s, furosemide's ability to prevent, or at least greatly reduce, the incidence of bleeding (exercise-induced pulmonary hemorrhage) by horses during races was discovered accidentally. In the United States of America, pursuant to the racing rules of most states, horses that bleed from the nostrils three times are permanently barred from racing. Clinical trials followed, and by decade's end, racing commissions in some states in the USA began legalizing its use on race horses. On September 1, 1995, New York became the last state in the United States to approve such use, after years of refusing to consider doing so. Some states allow its use for all racehorses; some allow it only for confirmed "bleeders". Its use for this purpose is still prohibited in many other countries.

Furosemide is also used in horses for pulmonary edema, congestive heart failure (in combination with other drugs), and allergic reactions. Although it increases circulation to the kidneys, it does not help kidney function, and is not recommended for kidney disease.

It is also used to treat congestive heart failure (pulmonary edema, pleural effusion, and/or ascites) in cats and dogs.[44] It can also be used in an attempt to promote urine production in anuric or oliguric acute kidney failure.

Furosemide is injected either intramuscularly or intravenously, usually 0.5-1.0 mg/kg twice/day, although less before a horse is raced. As with many diuretics, it can cause dehydration and electrolyte imbalance, including loss of potassium, calcium, sodium, and magnesium. Excessive use of furosemide will most likely lead to a metabolic alkalosis due to hypochloremia and hypokalemia. The drug should, therefore, not be used in horses that are dehydrated or experiencing kidney failure. It should be used with caution in horses with liver problems or electrolyte abnormalities. Overdose may lead to dehydration, change in drinking patterns and urination, seizures, gastrointestinal problems, kidney damage, lethargy, collapse, and coma.

Furosemide should be used with caution when combined with corticosteroids (as this increases the risk of electrolyte imbalance), aminoglycoside antibiotics (increases risk of kidney or ear damage), and trimethoprim sulfa (causes decreased platelet count). It may also cause interactions with anesthetics, so its use should be related to the veterinarian if the animal is going into surgery, and it decreases the kidneys' ability to excrete aspirin, so dosages will need to be adjusted if combined with that drug.

Furosemide may increase the risk of digoxin toxicity due to hypokalemia.

The drug is best not used during pregnancy or in a lactating mare, as it has been shown to be passed through the placenta and milk in studies with other species. It should not be used in horses with pituitary pars intermedia dysfunction (Cushings).

Furosemide is detectable in urine 36–72 hours following injection. Its use is restricted by most equestrian organizations.

Furosemide was patented in 1959 and approved for medical use in 1964.[3] It became popularly known as "loop diuretic" and was found to be particularly effective where mercurials and traditional thiazides did not work and where there was poisoning with barbiturates or the need for fast emergency treatment of oedema of the lungs or brain.[45]