Lamotrigine, sold as the brand name Lamictal among others, is an anticonvulsant medication used to treat epilepsy and bipolar disorder.[2] For epilepsy, this includes focal seizures, tonic-clonic seizures, and seizures in Lennox-Gastaut syndrome.[2] In bipolar disorder, it is used to treat acute episodes of depression and rapid cycling in bipolar type II and to prevent recurrence in bipolar type I.[2]

Common side effects include sleepiness, headache, vomiting, trouble with coordination, and rash.[2] Serious side effects include lack of red blood cells, increased risk of suicide, Stevens–Johnson syndrome, and allergic reactions.[2] Concerns exist that use during pregnancy or breastfeeding may result in harm.[3] Lamotrigine is a phenyltriazine, making it chemically different from other anticonvulsants.[2] How it works is not exactly clear.[2] It appears to decrease voltage-sensitive sodium channels of neurons.[2][4]

Lamotrigine is one of a small number of FDA-approved therapies for the form of epilepsy known as Lennox–Gastaut syndrome.[14] It reduces the frequency of LGS seizures, and is one of two medications known to decrease the severity of drop attacks.[15] Combination with valproate is common, but this increases the risk of lamotrigine-induced rash, and necessitates reduced dosing due to the interaction of these drugs.[16]

Lamotrigine is approved in the US for maintenance treatment of bipolar I disorder and bipolar II disorder.[17][18] While the anticonvulsants carbamazepine and valproate are predominantly antimanics, lamotrigine is most effective for preventing the recurrent depressive episodes of bipolar disorder. The drug seems ineffective in the treatment of current rapid-cycling, acute mania, or acute depression in bipolar disorder; however, it is effective at prevention of or delaying of manic, depressive, or rapid cycling episodes.[19] According to studies in 2007, lamotrigine may treat bipolar depression without triggering mania, hypomania, mixed states, or rapid-cycling.[20]

Therapeutic benefit is less evident when lamotrigine is used to treat a current-mood episode. It has not demonstrated effectiveness in treating acute mania,[21] and there is controversy regarding the drug's effectiveness in treating acute bipolar depression.[22] While the 2002 American Psychiatric Association (APA) guidelines recommend lamotrigine as a first-line treatment for acute depression in bipolar II disorder,[23] their website notes that the guidelines, being more than five years old, "can no longer be assumed to be current".[24] A paper written in 2008 by Nassir et al. reviewed evidence from trials that were unpublished and not referenced in the 2002 APA guidelines, and it concludes that lamotrigine has "very limited, if any, efficacy in the treatment of acute bipolar depression".[19] A 2008 paper by Calabrese et al. examined much of the same data, and found that in five placebo-controlled studies, lamotrigine did not significantly differ from placebo in the treatment of bipolar depression.[25] However, in a meta-analysis of these studies conducted in 2008, Calabrese found that lamotrigine was effective in individuals with bipolar depression, with a number needed to treat (NNT) of 11, or 7 in severe depression.[26]

A 2013 review about lamotrigine concluded that it is recommended in bipolar maintenance when depression is prominent and that more research is needed in regard to its role in the treatment of acute bipolar depression and unipolar depression. Furthermore, no information to recommend its use in other psychiatric disorders was found.[27]

Off-label uses include the treatment of peripheral neuropathy, trigeminal neuralgia, cluster headaches, migraines, visual snow, and reducing neuropathic pain,[28][29][30][31] although a systematic review conducted in 2013 concluded that well-designed clinical trials have shown no benefit for lamotrigine in neuropathic pain.[32] Off-label psychiatric usage includes the treatment of treatment-resistant obsessive-compulsive disorder,[33] depersonalization disorder,[34] hallucinogen persisting perception disorder,[35] schizoaffective disorder,[36] and borderline personality disorder.[37] It has not been shown to be useful in post-traumatic stress disorder.[38] 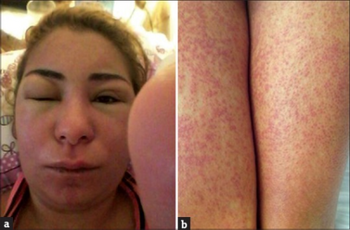 a) Facial swelling and redness b) morbilliform generalized peeling rash

Lamotrigine prescribing information has a black box warning about life-threatening skin reactions, including Stevens–Johnson syndrome (SJS), DRESS syndrome, and toxic epidermal necrolysis (TEN).[39] The manufacturer states that nearly all cases appear in the first two to eight weeks of therapy.[39] Patients should seek medical attention for any unexpected skin rash, as its presence is an indication of a possible serious or even deadly side effect of the drug. Not all rashes that occur while taking lamotrigine progress to SJS or TEN. Between 5 and 10% of patients will develop a rash, but only one in a thousand patients will develop a serious rash. Rash and other skin reactions are more common in children, so this medication is often reserved for adults. For patients whose lamotrigine has been stopped after development of a rash, rechallenge with lamotrigine is also a viable option. However, it is not applicable for very serious cases.[40]

The incidence of these eruptions increases in patients who are currently on, or recently discontinued a valproate-type anticonvulsant drug, as these medications interact in such a way that the clearance of both is decreased and the effective dose of lamotrigine is increased.[39]

Side effects such as rash, fever, and fatigue are very serious, as they may indicate incipient SJS, TEN, DRESS syndrome, or aseptic meningitis.[41]

Lamotrigine has been associated with a decrease in white blood cell count (leukopenia).[43] Lamotrigine does not prolong QT/QTc in TQT studies in healthy subjects.[44]

In people taking antipsychotics, cases of lamotrigine-precipitated neuroleptic malignant syndrome have been reported.[45][46]

In 2018, the FDA required a new warning for the risk of hemophagocytic lymphohistiocytosis. This reaction can occur between days to weeks after starting the treatment.[47]

Women are more likely than men to have side effects.[48] This is the opposite of most other anticonvulsants.

Some evidence shows interactions between lamotrigine and female hormones, which can be of particular concern for women on estrogen-containing hormonal contraceptives. Ethinylestradiol, an ingredient of such contraceptives, has been shown to decrease serum levels of lamotrigine.[49] Women starting an estrogen-containing oral contraceptive may need to increase the dosage of lamotrigine to maintain its level of efficacy. Likewise, women may experience an increase in lamotrigine side effects upon discontinuation of birth control pills. This may include the "pill-free" week where lamotrigine serum levels have been shown to increase twofold.[39]

Lamotrigine is expressed in breast milk; the manufacturer does not recommend breastfeeding during treatment. A frequently updated review of scientific literature rates lamotrigine as L3: moderately safe.[53]

Other types of effects

Lamotrigine binds to melanin-containing tissues such as the iris of the eye. The long-term consequences of this are unknown.[54]

GlaxoSmithKline investigated lamotrigine for the treatment of ADHD with inconclusive results. No detrimental effects on cognitive function were observed; however, the only statistical improvement in core ADHD symptoms was an improvement on a Paced Auditory Serial Addition Test that measures auditory processing speed and calculation ability.[55] Another study reported that lamotrigine might be a safe and effective treatment option for adult ADHD comorbid with bipolar and recurrent depression.[56]

Lamotrigine is known to affect sleep. Studies with small numbers of patients (10-15) reported that lamotrigine increases sleep stability (increases the duration of REM sleep, decreases the number of phase shifts, and decreases the duration of slow-wave sleep),[57] and that there was no effect on vigilance,[58] and daytime somnolence and cognitive function.[59] However, a retrospective study of 109 patients' medical records found that 6.7% of patients experienced an "alerting effect" resulting in intolerable insomnia, for which the treatment had to be discontinued.[60]

Lamotrigine can induce a type of seizure known as a myoclonic jerk, which tends to happen soon after the use of the medication.[61] When used in the treatment of myoclonic epilepsies such as juvenile myoclonic epilepsy, lower doses (and lower plasma levels) are usually needed, as even moderate doses of this drug can induce seizures, including tonic-clonic seizures, which can develop into status epilepticus, which is a medical emergency. It can also cause myoclonic status epilepticus.[42]

In overdose, lamotrigine can cause uncontrolled seizures in most people. Reported results in overdoses involving up to 15 g include increased seizures, coma, and death.[42]

It is a triazine derivate that inhibits voltage-sensitive sodium channels, leading to stabilization of neuronal membranes. It also blocks L-, N-, and P-type calcium channels and weakly inhibits the serotonin 5-HT3 receptor.[66] These actions are thought to inhibit release of glutamate at cortical projections in the ventral striatum limbic areas,[67] and its neuroprotective and antiglutamatergic effects have been pointed out as promising contributors to its mood stabilizing activity.[68] Observations that lamotrigine reduced γ-aminobutyric acid (GABA) A receptor-mediated neurotransmission in rat amygdala, suggest that a GABAergic mechanism may also be involved.[69] It appears that lamotrigine does not increase GABA blood levels in humans.[70]

Lamotrigine does not have pronounced effects on any of the usual neurotransmitter receptors that anticonvulsants affect (adrenergic, dopamine D1 and D2, muscarinic, GABA, histaminergic H1, serotonin 5-HT2, and N-methyl-D-aspartate). Inhibitory effects on 5-HT, norepinephrine, and dopamine transporters are weak.[71] Lamotrigine is a weak inhibitor of dihydrofolate reductase,[72] but whether this effect is sufficient to contribute to a mechanism of action or increases risk to the fetus during pregnancy is not known. Early studies of lamotrigine's mechanism of action examined its effects on the release of endogenous amino acids from rat cerebral cortex slices in vitro. As is the case for antiepileptic drugs that act on voltage-dependent sodium channels, lamotrigine thereby inhibits the release of glutamate and aspartate, which is evoked by the sodium-channel activator veratrine, and was less effective in the inhibition of acetylcholine or GABA release. At high concentrations, it had no effect on spontaneous or potassium-evoked amino acid release.[48]

These studies suggested that lamotrigine acts presynaptically on voltage-gated sodium channels to decrease glutamate release. Several electrophysiological studies have investigated the effects of lamotrigine on voltage-dependent sodium channels. For example, lamotrigine blocked sustained repetitive firing in cultured mouse spinal cord neurons in a concentration-dependent manner, at concentrations that are therapeutically relevant in the treatment of human seizures. In cultured hippocampal neurons, lamotrigine reduced sodium currents in a voltage-dependent manner, and at depolarised potentials showed a small frequency-dependent inhibition. These and a variety of other results indicate that the antiepileptic effect of lamotrigine, like those of phenytoin and carbamazepine, is at least in part due to use- and voltage-dependent modulation of fast voltage-dependent sodium currents. However, lamotrigine has a broader clinical spectrum of activity than phenytoin and carbamazepine and is recognised to be protective against generalised absence epilepsy and other generalised epilepsy syndromes, including primary generalised tonic–clonic seizures, juvenile myoclonic epilepsy, and Lennox-Gastaut syndrome.

It antagonises these receptors with the following IC50 values:[72]

The pharmacokinetics of lamotrigine follow first-order kinetics, with a half-life of 29 hours and volume of distribution of 1.36 L/kg.[73] Lamotrigine is rapidly and completely absorbed after oral administration. Its absolute bioavailability is 98% and its plasma Cmax occurs from 1.4 to 4.8 hours. Available data indicate that its bioavailability is not affected by food. Estimate of the mean apparent volume of distribution of lamotrigine following oral administration ranges from 0.9 to 1.3 L/kg. This is independent of dose and is similar following single and multiple doses in both patients with epilepsy and in healthy volunteers.[74]

Lamotrigine has fewer drug interactions than many anticonvulsant drugs, although pharmacokinetic interactions with carbamazepine, phenytoin and other hepatic enzyme inducing medications may shorten half-life.[77] Dose adjustments should be made on clinical response, but monitoring may be of benefit in assessing compliance.[48]

The capacity of available tests to detect potentially adverse consequences of melanin binding is unknown. Clinical trials excluded subtle effects and optimal duration of treatment. There are no specific recommendations for periodic ophthalmological monitoring. Lamotrigine binds to the eye and melanin-containing tissues which can accumulate over time and may cause toxicity. Prescribers should be aware of the possibility of long-term ophthalmologic effects and base treatment on clinical response. Patient compliance should be periodically reassessed with lab and medical testing of liver and kidney function to monitor progress or side effects.[48]

Lamotrigine was originally brought to market by GlaxoSmithKline, trademarked as Lamictal; it is also available in generic form under many brand names worldwide.[1][80]