Aplastic anemia is a long term condition in which the bone marrow fails to produce blood cells in sufficient numbers.[3] Most people have low levels of all blood cell types: red blood cells, white blood cells, and platelets.[6] Symptoms can include weakness, pale skin, shortness of breath, infections, and bleeding.[3]

The cause is unclear in 65% of cases.[3] Other cases may occur following a viral infections, due to a genetic conditions such as Fanconi anemia, or exposure to chemicals, medications or radiation.[3][4] The diagnosis may be suspected based on low blood cells together with low reticulocytes and the absence of changes concerning for blood cancer.[3] The diagnosis is confirmed by a bone marrow biopsy finding mostly fat cells instead of blood forming cells.[5]

Treatment may be directed at the underlying cause.[3] The preferred treatment is often a hematopoietic stem cell transplantation.[4] Otherwise options may include eltrombopag and immunosuppressive medicationss such as ciclosporin, anti-thymocyte globulin, and corticosteroids.[4][7] Blood transfusions may be required but may make later stem cell transplantation more difficult.[4][7]

Aplastic anemia affected about 0.6 to 6 people per million per year.[3] Males and females are affected equally frequently.[3] The condition is slightly more common in childhood and people in their early 20s.[3] Outcomes are variable and depend on a persons age and response to treatment.[3] The condition was first described in 1885.[6] The disease was the cause of death of Marie Curie.[8] 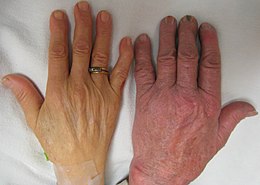 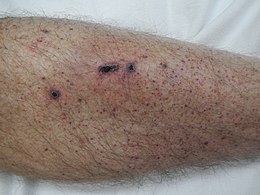 Petechia on the lower leg from thrombocytopenia

Anemia may lead to feeling tired, pale skin and a fast heart rate.[9]

Low platelets are associated with an increased risk of bleeding, bruising and petechiae. Low white blood cells increase the risk of infections.[9]

Aplastic anemia can be caused by exposure to certain chemicals, drugs, radiation, infection, immune disease; in about half the cases, a definitive cause is unknown. It is not a familial line hereditary condition, nor is it contagious. It can be acquired due to exposure to other conditions but if a person develops the condition, their offspring would not develop it by virtue of their genetic relationship.[10][11]

Aplastic anemia is present in up to 2% of patients with acute viral hepatitis.[14]

One known cause is an autoimmune disorder in which white blood cells attack the bone marrow.[6]

Short-lived aplastic anemia can also be a result of parvovirus infection.[15] In humans, the P antigen (also known as globoside), one of the many cellular receptors that contribute to a person's blood type, is the cellular receptor for parvovirus B19 virus that causes erythema infectiosum (fifth disease) in children. Because it infects red blood cells as a result of the affinity for the P antigen, parvovirus causes complete cessation of red blood cell production. In most cases, this goes unnoticed, as red blood cells live on average 120 days, and the drop in production does not significantly affect the total number of circulating red blood cells. In people with conditions where the cells die early (such as sickle cell disease), however, parvovirus infection can lead to severe anemia.[citation needed]

More frequently parvovirus B19 is associated with aplastic crisis which involves only the red blood cells (despite the name). Aplastic anemia involves all different cell lines.

Viruses that have been linked to the development of aplastic anemia include hepatitis, Epstein-Barr, cytomegalovirus, parvovirus B19, and HIV.

In some animals, aplastic anemia may have other causes. For example, in the ferret (Mustela putorius furo), it is caused by estrogen toxicity, because female ferrets are induced ovulators, so mating is required to bring the female out of heat. Intact females, if not mated, will remain in heat, and after some time the high levels of estrogen will cause the bone marrow to stop producing red blood cells.[citation needed]

The condition needs to be differentiated from pure red cell aplasia. In aplastic anemia, the patient has pancytopenia (i.e., leukopenia and thrombocytopenia) resulting in decrease of all formed elements. In contrast, pure red cell aplasia is characterized by reduction in red cells only. The diagnosis can only be confirmed on bone marrow examination. Before this procedure is undertaken, a patient will generally have had other blood tests to find diagnostic clues, including a complete blood count, renal function and electrolytes, liver enzymes, thyroid function tests, vitamin B12 and folic acid levels.[citation needed]

Treating immune-mediated aplastic anemia involves suppression of the immune system, an effect achieved by daily medicine intake, or, in more severe cases, a bone marrow transplant, a potential cure.[16] The transplanted bone marrow replaces the failing bone marrow cells with new ones from a matching donor. The multipotent stem cells in the bone marrow reconstitute all three blood cell lines, giving the patient a new immune system, red blood cells, and platelets. However, besides the risk of graft failure, there is also a risk that the newly created white blood cells may attack the rest of the body ("graft-versus-host disease"). In young patients with an HLA matched sibling donor, bone marrow transplant can be considered as first-line treatment, patients lacking a matched sibling donor typically pursue immunosuppression as a first-line treatment, and matched unrelated donor transplants are considered a second-line therapy.

Medical therapy of aplastic anemia often includes a course of antithymocyte globulin (ATG) and several months of treatment with cyclosporine to modulate the immune system. Chemotherapy with agents such as cyclophosphamide may also be effective but has more toxicity than ATG. Antibody therapy, such as ATG, targets T-cells, which are believed to attack the bone marrow. Corticosteroids are generally ineffective,[17] though they are used to ameliorate serum sickness caused by ATG. Normally, success is judged by bone marrow biopsy 6 months after initial treatment with ATG.[18]

One prospective study involving cyclophosphamide was terminated early due to a high incidence of mortality, due to severe infections as a result of prolonged neutropenia.[18]

In the past, before the above treatments became available, patients with low leukocyte counts were often confined to a sterile room or bubble (to reduce risk of infections), as in the case of Ted DeVita.[19]

Full blood counts are required on a regular basis to determine whether the patient is still in a state of remission.

Many patients with aplastic anemia also have clones of cells characteristic of the rare disease paroxysmal nocturnal hemoglobinuria (PNH, anemia with thrombopenia and/or thrombosis), sometimes referred to as AA/PNH. Occasionally PNH dominates over time, with the major manifestation intravascular hemolysis. The overlap of AA and PNH has been speculated to be an escape mechanism by the bone marrow against destruction by the immune system. Flow cytometry testing is performed regularly in people with previous aplastic anemia to monitor for the development of PNH.[citation needed]

Untreated, severe aplastic anemia has a high risk of death.[20] Modern treatment, by drugs or stem cell transplant, has a five-year survival rate that exceeds 45%, with younger age associated with higher survival.[21]

Older people (who are generally too frail to undergo bone marrow transplants), and people who are unable to find a good bone marrow match, undergoing immune suppression have five-year survival rates of up to 35%.[citation needed]

Relapses are common. Relapse following ATG/ciclosporin use can sometimes be treated with a repeated course of therapy. In addition, 10–15% of severe aplastic anemia cases evolve into myelodysplastic syndrome and leukemia.[citation needed] According to a study, for children who underwent immunosuppressive therapy, about 15.9% of children who responded to immunosuppressive therapy encountered relapse.[23]

Milder disease can resolve on its own.[citation needed]

Aplastic anemia is a rare, non cancerous disorder where the blood marrow is unable to adequately produce blood cells required for survival.[26][27] It is estimated that the incidence of aplastic anemia is 0.7-4.1 cases per million people worldwide with the prevalence between men and women being approximately equal.[28] The incidence rate of aplastic anemia in Asia is 2-3 times higher than it is in the West, with the incidence of the disease in the United States is 300-900 cases per year.[27][28] The disease most commonly affects adults aged 15-25 and over the age of 60, but the disease can be observed in all age groups.[27] The majority of instances of this disease are acquired during life and not inherited.[26] These acquired cases are often linked to environmental exposures such as chemicals, drugs, and infectious agents that damage the blood marrow and compromise the ability of the marrow to generate new blood cells.[28] However, in many instances the underlying cause for the disease is not found. This is referred to as idiopathic aplastic anemia and accounts for 75% of cases.[27] This compromises the effectiveness of treatment since treatment of the disease is often aimed at the underlying cause.[29] Those with a higher risk for aplastic anemia include individuals that are exposed to high-dose radiation, exposed to toxic chemicals, take certain prescription drugs, have pre-existing autoimmune disorders or blood disease, or are pregnant.[30] The five-year survival rate is higher than 75% among recipients of blood marrow transplantation.[29] Other treatment strategies include medications and blood transfusions.[30] Patients that are untreated will often die within a year as a result of the disease due to related complications, which are most commonly bleeding and infection due to deficiency of platelets and white blood cells, respectively. [29] There is not a screening test that currently exists for early detection and diagnosis of aplastic anemia.[27]