Risperidone, sold under the brand name Risperdal among others, is an atypical antipsychotic.[2] It is used to treat schizophrenia, bipolar disorder, and irritability associated with autism.[2] It is taken either by mouth or by injection into a muscle.[2] The injectable version is long-acting and lasts for about two weeks.[4] When the unpublished literature is included, benefits are lower and harms are higher than when only the published literature is looked at.[5]

Common side effects include movement problems, sleepiness, dizziness, trouble seeing, constipation, and increased weight.[2][6] Serious side effects may include the potentially permanent movement disorder tardive dyskinesia, as well as neuroleptic malignant syndrome, an increased risk of suicide, and high blood sugar levels.[2][4] In older people with psychosis as a result of dementia, it may increase the risk of dying.[2] It is unknown if it is safe for use in pregnancy.[2] Its mechanism of action is not entirely clear, but is believed to be related to its action as a dopamine antagonist and serotonin antagonist.[2]

Studies evaluating the utility of risperidone by mouth for maintenance therapy have reached varying conclusions. A 2012 systematic review concluded that evidence is strong that risperidone is more effective than all first-generation antipsychotics other than haloperidol, but that evidence directly supporting its superiority to placebo is equivocal.[16] A 2011 review concluded that risperidone is more effective in relapse prevention than other first- and second-generation antipsychotics with the exception of olanzapine and clozapine.[17] A 2016 Cochrane review suggests that risperidone reduces the overall symptoms of schizophrenia, but firm conclusions are difficult to make due to very low-quality evidence. Data and information are scarce, poorly reported, and probably biased in favour of risperidone, with about half of the included trials developed by drug companies. The article raises concerns regarding the serious side effects of risperidone, such as parkinsonism.[18] A 2011 Cochrane review compared risperidone with other atypical antipsychotics such as olanzapine for schizophrenia:[19]

Compared to placebo, risperidone treatment reduces certain problematic behaviors in autistic children, including aggression toward others, self-injury, meltdowns, and rapid mood changes.[29] The evidence for its efficacy appears to be greater than that for alternative pharmacological treatments.[30] Weight gain is an important adverse effect.[8][31] Some authors recommend limiting the use of risperidone and aripiprazole to those with the most challenging behavioral disturbances in order to minimize the risk of drug-induced adverse effects.[32] Evidence for the efficacy of risperidone in autistic adolescents and young adults is less persuasive.[33]

Risperidone has shown promise in treating therapy-resistant obsessive–compulsive disorder, when serotonin reuptake inhibitors are not sufficient.[34]

Risperidone has not demonstrated a benefit in the treatment of eating disorders or personality disorders.[35]

While antipsychotic medications such as risperidone have a slight benefit in people with dementia, they have been linked to higher incidences of death and stroke.[35] Because of this increased risk of death, treatment of dementia-related psychosis with risperidone is not FDA approved.[8]

Available forms of risperidone include tablet, oral dissolving tablet, oral solution, and powder and solvent for suspension for injection.[36]

The defined daily dose is 5 mg for the tablets and oral liquid, and 2.7 mg for the injection.[3] The initial dose may vary from 1 mg twice per day to 3 mg twice per day in adults in adults.[37] In older people, those with kidney problems, and those with liver problems smaller doses should be used.[37] For an episode of acute psychosis at least 3 months of treatment is recommended while for chronic psychosis at least a year is recommended.[37] When stopping, this should be done gradually.[37] 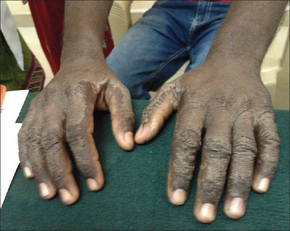 Common side effects include movement problems, sleepiness, dizziness, trouble seeing, constipation, and increased weight.[2][6] About 9 to 20% of people gained more than 7% of the baseline weight depending on the dose.[2] Serious side effects may include the potentially permanent movement disorder tardive dyskinesia, as well as neuroleptic malignant syndrome, an increased risk of suicide, and high blood sugar levels.[2][4] In older people with psychosis as a result of dementia, it may increase the risk of dying.[2]

The British National Formulary recommends a gradual withdrawal when discontinuing antipsychotic treatment to avoid acute withdrawal syndrome or rapid relapse.[42] Some have argued the additional somatic and psychiatric symptoms associated with dopaminergic super-sensitivity, including dyskinesia and acute psychosis, are common features of withdrawal in individuals treated with neuroleptics.[43][44][45][46] This has led some to suggest the withdrawal process might itself be schizomimetic, producing schizophrenia-like symptoms even in previously healthy patients, indicating a possible pharmacological origin of mental illness in a yet unknown percentage of patients currently and previously treated with antipsychotics. This question is unresolved, and remains a highly controversial issue among professionals in the medical and mental health communities, as well as the public.[47]

Older people with dementia-related psychosis are at a higher risk of death if they take risperidone compared to those who do not. Most deaths are related to heart problems or infections.[8]

Risperidone has been classified as a "qualitatively atypical" antipsychotic agent with a relatively low incidence of extrapyramidal side effects (when given at low doses) that has more pronounced serotonin antagonism than dopamine antagonism. Risperidone contains the functional groups of benzisoxazole and piperidine as part of its molecular structure. Although not a butyrophenone, it was developed with the structures of benperidol and ketanserin as a basis. It has actions at several 5-HT (serotonin) receptor subtypes. These are 5-HT2C, linked to weight gain, 5-HT2A, linked to its antipsychotic action and relief of some of the extrapyramidal side effects experienced with the typical neuroleptics.[50]

It was recently found that D-amino acid oxidase, the enzyme that catalyses the breakdown of D-amino acids (e.g. D-alanine and D-serine — the neurotransmitters) is inhibited by risperidone.[51]

Risperidone acts on the following receptors:

Dopamine receptors: This drug is an antagonist of the D1 (D1, and D5) as well as the D2 family (D2, D3 and D4) receptors, with 70-fold selectivity for the D2 family. This drug has "tight binding" properties, which means it has a long half-life and like other antipsychotics, risperidone blocks the mesolimbic pathway, the prefrontal cortex limbic pathway, and the tuberoinfundibular pathway in the central nervous system. Risperidone may induce extrapyramidal side effects, akathisia and tremors, associated with diminished dopaminergic activity in the striatum. It can also cause sexual side effects, galactorrhoea, infertility, gynecomastia and, with chronic use reduced bone mineral density leading to breaks, all of which are associated with increased prolactin secretion.[50]

Serotonin receptors: Its action at these receptors may be responsible for its lower extrapyramidal side effect liability (via the 5-HT2A/2C receptors) and improved negative symptom control compared to typical antipsychotics such as haloperidol for instance. Its antagonistic actions at the 5-HT2C receptor may account, in part, for its weight gain liability.[medical citation needed]

Alpha α1 adrenergic receptors: This action accounts for its orthostatic hypotensive effects and perhaps some of the sedating effects of risperidone.[50]

Histamine H1 receptors: effects on these receptors account for its sedation and reduction in vigilance. This may also lead to drowsiness and weight gain.[50]

Though this medication possesses similar effects to other typical and atypical antipsychotics, it does not possess an affinity for the muscarinic acetylcholine receptors. In many respects, this medication can be useful as an "acetylcholine release-promoter" similar to gastrointestinal drugs such as metoclopramide and cisapride.[medical citation needed]

Risperidone undergoes hepatic metabolism and renal excretion. Lower doses are recommended for patients with severe liver and kidney disease.[8] The active metabolite of risperidone, paliperidone, is also used as an antipsychotic.[53] 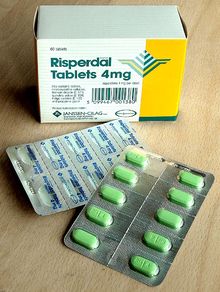 Risperidone was approved by the United States Food and Drug Administration (FDA) in 1993 for the treatment of schizophrenia.[64] In 2003, the FDA approved risperidone for the short-term treatment of the mixed and manic states associated with bipolar disorder. In 2006, the FDA approved risperidone for the treatment of irritability in autistic children and adolescents.[65] On August 22, 2007, risperidone was approved as the only drug agent available for treatment of schizophrenia in youths, ages 13–17; it was also approved that same day for treatment of bipolar disorder in youths and children, ages 10–17, joining lithium. The FDA's decision was based in part on a study of autistic people with severe and enduring problems of violent meltdowns, aggression, and self-injury; risperidone is not recommended for autistic people with mild aggression and explosive behavior without an enduring pattern.[66]

Janssen's patent on risperidone expired on December 29, 2003, opening the market for cheaper generic versions from other companies, and Janssen's exclusive marketing rights expired on June 29, 2004 (the result of a pediatric extension). It is available under many brand names worldwide.[1]

Risperidone is available as a tablet, an oral solution, and an ampule, which is a depot injection.[1]

On 11 April 2012, Johnson & Johnson (J&J) and its subsidiary Janssen Pharmaceuticals Inc. were fined $1.2 billion by Judge Timothy Davis Fox of the Sixth Division of the Sixth Judicial Circuit of the U.S. state of Arkansas.[67] The jury found the companies had downplayed multiple risks associated with risperidone (Risperdal). The verdict was later reversed by the Arkansas State Supreme court.[68]

In August 2012, Johnson & Johnson agreed to pay $181 million to 36 U.S. states in order to settle claims that it had promoted risperidone and paliperidone for off-label uses including for dementia, anger management, and anxiety.[69]

In November 2013, J&J was fined $2.2 billion for illegally marketing risperidone for use in people with dementia.[70]

In 2015, Steven Brill posted a 15-part investigative journalism piece on J&J in The Huffington Post, called "America's most admired lawbreaker", which was focused on J&J's marketing of risperidone.[71][72]