From WikiProjectMed
Jump to navigation Jump to search
Not to be confused with acetohexamide or methazolamide.

Acetazolamide, sold under the trade name Diamox among others, is a medication used to treat glaucoma, epilepsy, altitude sickness, periodic paralysis, idiopathic intracranial hypertension (raised brain pressure of unclear cause), and heart failure.[1][2] It may be used long term for the treatment of open angle glaucoma and short term for acute angle closure glaucoma until surgery can be carried out.[5] It is taken by mouth or injection into a vein.[1]

Common side effects include numbness, ringing in the ears, loss of appetite, vomiting, and sleepiness.[1] It is not recommended in those with significant kidney problems, liver problems, or who are allergic to sulfonamides.[1][5] Acetazolamide is in the diuretic and carbonic anhydrase inhibitor families of medication.[1] It works by decreasing the amount of hydrogen ions and bicarbonate in the body.[1]

In epilepsy, the main use of acetazolamide is in menstrual-related epilepsy and as an add on to other treatments in refractory epilepsy.[10][14] It has been demonstrated in drug trials to relieve symptoms associated with dural ectasia in individuals with Marfan's Syndrome.[15] A 2012 review and meta-analysis found that there was "limited supporting evidence" but that acetazolamide "may be considered" for the treatment of central (as opposed to obstructive) sleep apnea.[16]

It has also been used to prevent methotrexate-induced kidney damage by alkalinalizing the urine, hence speeding up methotrexate excretion by increasing its solubility in urine.[13][17] There is some evidence to support its use to prevent hemiplegic migraine.[18]

In the prevention or treatment of mountain sickness, acetazolamide forces the kidneys to excrete bicarbonate, the conjugate base of carbonic acid. By increasing the amount of bicarbonate excreted in the urine, the blood becomes more acidic.[13] As the body equates acidity of the blood to its CO2 concentration, artificially acidifying the blood fools the body into thinking it has an excess of CO2, and it excretes this perceived excess CO2 by deeper and faster breathing, which in turn increases the amount of oxygen in the blood.[19][20] Acetazolamide is not an immediate cure for acute mountain sickness; rather, speeds up (or, when taking before traveling, forces the body to early start) part of the acclimatization process which in turn helps to relieve symptoms.[21] Acetazolamide is still effective if started early in the course of mountain sickness. As prevention, it is started one day before travel to altitude and continued for the first 2 days at altitude.[22]

Acetazolamide is pregnancy category B3 in Australia, which means that studies in rats, mice and rabbits in which acetazolamide was given intravenously or orally caused an increased risk of fetal malformations, including defects of the limbs.[11] Despite this, there is insufficient evidence from studies in humans to either support or discount this evidence.[11]

Limited data are available on the effects of nursing mothers taking acetazolamide. Therapeutic doses create low levels in breast milk and are not expected to cause problems in infants.[23]

The defined daily dose is 0.75 gram by mouth or by injection.[3] 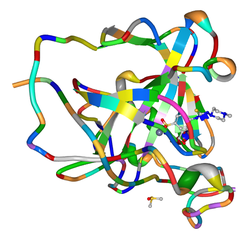 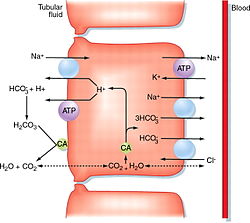 The mechanism of diuresis involves the proximal tubule of the kidney. The enzyme carbonic anhydrase is found here, allowing the reabsorption of bicarbonate, sodium, and chloride. By inhibiting this enzyme, these ions are excreted, along with excess water, lowering blood pressure, intracranial pressure, and intraocular pressure. By excreting bicarbonate, the blood becomes acidic, causing compensatory hyperventilation with deep respiration (Kussmaul respiration), increasing levels of oxygen and decreasing levels of carbon dioxide in the blood.[26]

In the eye this results in a reduction in aqueous humour.[11]

Bicarbonate (HCO3−) has a pKa of 10.3 with carbonate (CO32−), far further from physiologic pH (7.35–7.45), and so it is more likely to accept a proton than to donate one, but it is also far less likely for it to do either, thus bicarbonate will be the major species at physiological pH.

In short, under normal conditions, the net effect of carbonic anhydrase in the urinary lumen and cells of the proximal convoluted tubule is to acidify the urine and transport bicarbonate (HCO3−) into the body. Another effect is excretion of Cl− as it is needed to maintain electroneutrality in the lumen, as well as the reabsorption of Na+ into the body.

Thus, by disrupting this process with acetazolamide, urinary Na+ and bicarbonate (HCO3−) are increased, and urinary H+ and Cl− are decreased. Inversely, serum Na+ and bicarbonate (HCO3−) are decreased, and serum H+ and Cl− are increased. H2O generally follows sodium, and so this is how the clinical diuretic effect is achieved, which reduces blood volume and thus preload on the heart to improve contractility and reduce blood pressure, or achieve other desired clinical effects of reduced blood volume such as reducing edema or intracranial pressure.[27]

Acetazolamide was first produced in 1950 and then used for epilepsy in 1952.[28] It was marketed as diamox in 1954 and found to be useful in wide angle glaucoma.[29] As a diuretic, it was replaced by the introduction of chlorothiazide in 1957.[29]