Tacrolimus is a medication used by mouth or by injection to prevent rejection after organ transplant.[2][3] Levels of the medication should be regularly monitored.[3] As a cream it is used for moderate to severe eczema or psoriasis when other treatments are not sufficient.[2][4]

Common side effects when take by mouth or injection include kidney problems, diarrhea, nausea, high blood potassium, and infection.[5] Other side effects may include high blood sugar, neurological problems, lymphoma, and anaphylaxis.[3] Common side effects when used as a cream include itchiness, headache, and red skin.[4] It is unclear if the cream is safe in pregnancy.[6] Tacrolimus is a calcineurin inhibitor.[2] It is believed to works by decreasing the activity of T cells.[3]

Tacrolimus was discovered in 1987, and approved for medical use in the United States in 1994.[5] It is available as a generic medication.[7] In the United Kingdom 50 tablets of 5 mg costs the NHS about 206 pounds in 2020.[2] In the United States this amount costs about 82 USD as of 2020 while 30 grams of 0.1% cream costs about 36 USD.[7][8] It was initially made from a soil sample in Japan that contained the bacterium Streptomyces tsukubaensis.[9]

It has similar immunosuppressive properties to ciclosporin, but is much more potent. Immunosuppression with tacrolimus was associated with a significantly lower rate of acute rejection compared with ciclosporin-based immunosuppression (30.7% vs 46.4%) in one study.[10] Clinical outcome is better with tacrolimus than with ciclosporin during the first year of liver transplantation.[11][12] Long-term outcome has not been improved to the same extent. Tacrolimus is normally prescribed as part of a post-transplant cocktail including steroids, mycophenolate, and IL-2 receptor inhibitors such as basiliximab. Dosages are titrated to target blood levels.

As an ointment, tacrolimus is used in the treatment of eczema. It suppresses inflammation in a similar way to steroids, and is equally as effective as a mid-potency steroid. An important advantage of tacrolimus is that, unlike steroids, it does not cause skin thinning (atrophy).[13] Medical literature also points out that solitary mastocytoma can be treated with topical tacrolimus successfully[14]

There is tentative evidence for tacrolimus in ulcerative colitis (UC).[15]

Tacrolimus has been shown to reduce the risk of serious infection in lupus nephritis, when compared to other agents.[16]

The by mouth formulation is taken twice per day.[3] Levels of the medication should be regularly monitored.[3] The lower level of dosing is recommended in those with liver or kidney problems.[3]

By mouth or intravenous

Contraindications and precautions include:[17]

In addition, it may potentially increase the severity of existing fungal or infectious conditions such as herpes zoster or polyoma viral infections.[17]

In people receiving immunosuppressants to reduce transplant graft rejection, an increased risk of malignancy (cancer) is a recognised complication.[17] The most common cancers are non-Hodgkin's lymphoma[22] and skin cancers. The risk appears to be related to the intensity and duration of treatment.

It is not recommended with

The most common side effects associated with the use of topical tacrolimus ointments, especially if used over a wide area, include a burning or itching sensation on the initial applications, with increased sensitivity to sunlight and heat on the affected areas. Less common are flu-like symptoms, headache, cough, and burning eyes.[23]

Tacrolimus and a related drug for eczema (pimecrolimus) were suspected of carrying a cancer risk, though the matter is still a subject of controversy. The FDA issued a health warning in March 2005 for the drug, based on animal models and a small number of patients. Until further human studies yield more conclusive results, the FDA recommends that users be advised of the potential risks. However, current practice by UK dermatologists is not to consider this a significant real concern and they are increasingly recommending the use of these new drugs.[24]

Also like cyclosporin, it has a wide range of interactions. Tacrolimus is primarily metabolised by the cytochrome P450 system of liver enzymes, and there are many substances that interact with this system and induce or inhibit the system's metabolic activity.[17]

Interactions include that with grapefruit which increases tacrolimus plasma concentrations. As infections are a major cause of morbidity and mortality in the post-transplant patient, the most commonly[citation needed] reported interactions include interactions with anti-microbial drugs. Macrolide antibiotics including erythromycin and clarithromycin, as well as several of the newer classes of antifungals, especially of the azole class (fluconazole, voriconazole), increase tacrolimus levels by competing for cytochrome enzymes.[17] 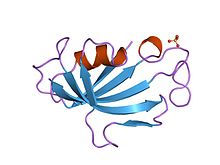 FKBP12, the target protein of tacrolimus

Tacrolimus is a macrolide calcineurin inhibitor. In T-cells, activation of the T-cell receptor normally increases intracellular calcium, which acts via calmodulin to activate calcineurin. Calcineurin then dephosphorylates the transcription factor nuclear factor of activated T-cells (NF-AT), which moves to the nucleus of the T-cell and increases the activity of genes coding for IL-2 and related cytokines. Tacrolimus prevents the dephosphorylation of NF-AT.[25]

In detail, tacrolimus reduces peptidylprolyl isomerase activity by binding to the immunophilin FKBP12 (FK506 binding protein), creating a new complex. This FKBP12–FK506 complex interacts with and inhibits calcineurin, thus inhibiting both T-lymphocyte signal transduction and IL-2 transcription.[26] Although this activity is similar to that of cyclosporin, the incidence of acute rejection is reduced by tacrolimus use over cyclosporin use.[10] Although short-term immunosuppression concerning patient and graft survival is found to be similar between the two drugs, tacrolimus results in a more favorable lipid profile, and this may have important long-term implications given the prognostic influence of rejection on graft survival.[27]

Oral tacrolimus is slowly absorbed in the gastrointestinal tract, with a total bioavailability of 20 to 25% (but with variations from 5 to 67%) and highest blood plasma concentrations (Cmax) reached after one to three hours. Taking the drug together with a meal, especially one rich in fat, slows down resorption and reduces bioavailability. In the blood, tacrolimus is mainly bound to erythrocytes; only 5% are found in the plasma, of which more than 98.8% are bound to plasma proteins.[17][28]

The substance is metabolized in the liver, mainly via CYP3A, and in the intestinal wall. All metabolites found in the circulation are inactive. Biological half-life varies widely and seems to be higher for healthy persons (43 hours on average) than for patients with liver transplants (12 hours) or kidney transplants (16 hours), due to differences in clearance. Tacrolimus is predominantly eliminated via the faeces in form of its metabolites.[17][28]

When applied locally on eczema, tacrolimus has little to no bioavailability.[17]

The predominant enzyme responsible for metabolism of tacrolimus is CYP3A5. Genetic variations within CYP3A5 that result in changes to the activity of the CYP3A5 protein can affect concentrations of tacrolimus within the body. In particular, individuals who are homozygous for the G allele at the single nucleotide polymorphism (SNP) rs776746 (also known as CYP3A5 *3/*3) have a non-functional CYP3A5 protein. The frequency of the G allele varies worldwide, from 4% in some African populations to 80–90% in Caucasian populations.[29] Across a large number of studies, individuals homozygous for the G allele have been shown to have higher concentrations of tacrolimus and require lower doses of the drug, as compared to individuals who are not homozygous for the G allele. Achieving target concentrations of tacrolimus is important – if levels are too low, then there is a risk of transplant rejection, if levels are too high, there is a risk of drug toxicities. There is evidence to suggest that dosing patients based on rs776746 genotype can result in faster and more frequent achievement of target tacrolimus levels. However, there is a lack of consistent evidence as to whether dosing based on rs776746 genotype results in improved clinical outcomes (such as a decreased risk for transplant rejection or drug toxicities), likely because patients taking tacrolimus are subject to therapeutic drug monitoring.[30][31][32][33]

Studies have shown that genetic polymorphisms of genes other than CYP3A5, such as NR1I2[34][35] (encoding PXR), also significantly influence the pharmacokinetics of tacrolimus.

Tacrolimus was first approved by the US Food and Drug Administration (FDA) in 1994,[40][41] for use in liver transplantation; the indications were extended to include kidney, heart, small bowel, pancreas, lung, trachea, skin, cornea, bone marrow, and limb transplants.[medical citation needed] Generic versions of tacrolimus were approved in the US in 2017.[42]

A branded version of the drug is owned by Astellas Pharma, and is sold under the brand name Prograf, given twice daily. A number of other manufacturers hold marketing authorisation for alternative brands of the twice-daily formulation.[47]

Once-daily formulations with marketing authorisation include Advagraf (Astellas Pharma) and Envarsus (marketed as Envarsus XR in US by Veloxis Pharmaceuticals and marketed in Europe by Chiesi).[47] These formulations are intended to reduce pharmacokinetic variation in blood levels and facilitate compliance with dosing.[medical citation needed]

The topical formulation is marketed by LEO Pharma under the name Protopic.[47]

The starter unit, DHCHC from the chorismic acid is formed by fkbO enzyme and loaded onto CoA-ligase domain (CoL). Then, it proceeds to NADPH dependent reduction(ER). Three enzymes, fkbA,B,C enforce processes from the loading module to the module 10, the last step of PKS 1. fkbB enzyme is responsible of allylmalonyl-CoA synthesis or possibly propionylmalonyl-CoA at C21, which it is an unusual step of general PKS 1. As mentioned, if two methoxymalonyl CoA molecules are substituted for two malonyl-CoA molecules, they will take place in module 7 and 8 (C13 and C15), and fkbA enzyme will enforce this process. After the last step (module 10) of PKS 1, one molecule of L-pipecolic acid formed from L-lysine and catalyzed through fkbL enzyme synthesizes with the molecule from the module 10. The process of L-pipecolic acid synthesis is NRPS enforced by fkbP enzyme. After synthesizing the entire subunits, the molecule is cyclized. After the cyclization, the pre-tacrolimus molecule goes through the post-synthase tailoring steps such as oxidation and S-adenosyl methionine. Particularly fkbM enzyme is responsible of alcohol methylation targeting the alcohol of DHCHC starter unit (Carbon number 31 depicted in brown), and fkbD enzyme is responsible of C9 (depicted in green). After these tailoring steps, the tacrolimus molecule becomes biologically active.[48][49][50]