Oxazepam is a benzodiazepine used to treat anxiety, trouble sleeping, and alcohol withdrawal.[3][2] It is taken by mouth.[2] It has a relatively slow onset and prolonged effects.[7]

Common side effects include sleepiness, dizziness, and headache.[2] Other side effects may include abuse, agitation, memory loss, suicide, and slurred speech.[3] Use is not recommended during early pregnancy.[2] Use is not generally recommended with opioids.[2] It is believed to work via the GABA neurotransmitter.[2] 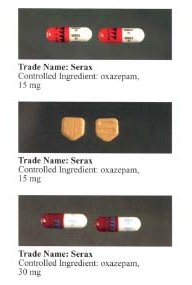 It is an intermediate-acting benzodiazepine with a slow onset of action,[10] so it is usually prescribed to individuals who have trouble staying asleep, rather than falling asleep. It is commonly prescribed for anxiety disorders with associated tension, irritability, and agitation. It is also prescribed for drug and alcohol withdrawal, and for anxiety associated with depression. Physicians may use oxazepam outside its approved indications to treat social phobia, post-traumatic stress disorder, insomnia, premenstrual syndrome, and other conditions.[11]

The side effects of oxazepam are similar to those of other benzodiazepines, and may include dizziness, drowsiness, headache, memory impairment, paradoxical excitement, and anterograde amnesia, but does not affect transient global amnesia. Side effects due to rapid decrease in dose or abrupt withdrawal from oxazepam may include abdominal and muscle cramps, convulsions, depression, inability to fall asleep or stay asleep, sweating, tremors, or vomiting.[12]

Benzodiazepines require special precautions if used in the elderly, during pregnancy, in children, alcohol- or drug-dependent individuals, and individuals with comorbid psychiatric disorders.[13]

In September 2020, the U.S. Food and Drug Administration (FDA) required the boxed warning be updated for all benzodiazepines to describe the risks of abuse, misuse, addiction, physical dependence, and withdrawal reactions consistently across all the medicines in the class.[14]

Oxazepam when taken during the third trimester, causes a definite risk to the neonate including a severe benzodiazepine withdrawal syndrome including hypotonia, and reluctance to suck, to apnoeic spells, cyanosis, and impaired metabolic responses to cold stress. Floppy infant syndrome and sedation in the newborn may also occur. Symptoms of floppy infant syndrome and the neonatal benzodiazepine withdrawal syndrome have been reported to persist from hours to months after birth.[16]

Benzodiazepines including oxazepam are lipophilic drugs and rapidly penetrate membranes, so rapidly crosses over into the placenta with significant uptake of the drug. Use of benzodiazepines in late pregnancy, especially high doses, may result in floppy infant syndrome.[17]

As oxazepam is an active metabolite of diazepam, an overlap in possible interactions is likely with other drugs or food, with exception of the pharmacokinetic CYP450 interactions (e.g. with cimetidine). Precautions and following the prescription are required when taking oxazepam (or other benzodiazepines) in combinations with antidepressant medication (SSRIs such as fluoxetine, sertraline, and paroxetine, or multiple reuptake inhibitors such as bupropion, duloxetine, or venlafaxine), potent painkillers (opioids, e.g. morphine, oxycodone or methadone). Concurrent use of these medicines (as well as other benzodiazepines) can interact in a way that is difficult to predict. Drinking alcohol when taking oxazepam is not recommended. Concomitant use of oxazepam and alcohol can lead to increased sedation, severe problems with coordination (ataxia), decreased muscle tone, and in severe cases or in predisposed patients, even to life-threatening intoxications with respiratory depression, coma, and collapse. There is a risk of blood circulation collapse, possibly the same condition as blood circulation syncope Archived 2021-09-05 at the Wayback Machine, when oxazepam is used in combination with quetiapine, an antipsychotic.

Oxazepam is an intermediate-acting benzodiazepine of the 3-hydroxy family; it acts on benzodiazepine receptors, resulting in increased effect of GABA to the GABAA receptor which results in inhibitory effects on the central nervous system.[22][23] The half-life of oxazepam is between 6 and 9 hours.[24][5][25] It has been shown to suppress cortisol levels.[26] Oxazepam is the most slowly absorbed and has the slowest onset of action of all the common benzodiazepines according to one British study.[27]

Oxazepam is an active metabolite formed during the breakdown of diazepam, nordazepam, and certain similar drugs. It may be safer than many other benzodiazepines in patients with impaired liver function because it does not require hepatic oxidation, but rather, it is simply metabolized by glucuronidation, so oxazepam is less likely to accumulate and cause adverse reactions in the elderly or people with liver disease. Oxazepam is similar to lorazepam in this respect.[28] Preferential storage of oxazepam occurs in some organs, including the heart of the neonate. Absorption by any administered route and the risk of accumulation is significantly increased in the neonate, and withdrawal of oxazepam during pregnancy and breast feeding is recommended, as oxazepam is excreted in breast milk.[29]

Oxazepam, along with diazepam, nitrazepam, and temazepam, were the four benzodiazepines listed on the pharmaceutical benefits scheme and represented 82% of the benzodiazepine prescriptions in Australia in 1990–1991.[34] It is in several countries the benzodiazepine of choice for novice users, due to a low chance of accumulation and a relatively slow absorption speed.[35]

Oxazepam has the potential for misuse, defined as taking the drug to achieve a high, or continuing to take the drug in the long term against medical advice.[36] Benzodiazepines, including diazepam, oxazepam, nitrazepam, and flunitrazepam, accounted for the largest volume of forged drug prescriptions in Sweden from 1982 to 1986. During this time, a total of 52% of drug forgeries were for benzodiazepines, suggesting they were a major prescription drug class of abuse.[37]

However, due to its slow rate of absorption and its slow onset of action,[27] oxazepam has a relatively low potential for abuse compared to some other benzodiazepines, such as temazepam, flunitrazepam, or triazolam, which have a high potential for abuse similar to barbiturates.[38]

Oxazepam is a Schedule IV drug under the Convention on Psychotropic Substances.[39]

In 2013, a laboratory study which exposed European perch to oxazepam concentrations equivalent to those present in European rivers (1.8 micrograms liter–1) found that they exhibited increased activity, reduced sociality, and higher feeding rate.[41] In 2016, a follow-up study which exposed salmon smolt to oxazepam for seven days before letting them migrate observed increased intensity of migratory behaviour compared to controls.[42] A 2019 study associated this faster, bolder behaviour in exposed smolt to increased mortality due to a higher likelihood of being predated on.[43]

On the other hand, a 2018 study from the same authors, which kept 480 European perch and 12 northern pikes in 12 ponds over 70 days, half of them control and half spiked with oxazepam, found no significant difference in either perch growth or mortality. However, it suggested that the latter could be explained by the exposed perch and pike being equally hampered by oxazepam, rather than the lack of an overall effect.[44] Lastly, a 2021 study built on these results by comparing two whole lakes filled with perch and pikes - one control while the other was exposed to oxazepam 11 days into experiment, at concentrations between 11 and 24 μg L–1, which is 200 times greater than the reported concentrations in the European rivers. Even so, there were no measurable effects on pike behaviour after the addition of oxazepam, while the effects on perch behaviour were found to be negligible. The authors concluded that the effects previously attributed to oxazepam were instead likely caused by a combination of fish being stressed by human handling and small aquaria, followed by being exposed to a novel environment.[45]