Methylprednisolone, sold under the brand name Depo-Medrol among others, is a corticosteroid medication used to suppress the immune system and decrease inflammation.[3] Conditions in which it is used include skin diseases, rheumatic disorders, allergies, asthma, croup, COPD, certain cancers, multiple sclerosis, and as add-on therapy for tuberculosis.[3] It is given by mouth, by injection into a vein or muscle, or applied to the skin.[3]

Serious side effects may include mental health problems and an increased risk of infection.[3] Common side effects with long-term use include osteoporosis, cataracts, weakness, easy bruising, and yeast infections.[3] For pregnant women, short-term use around the time of delivery is safe for the baby; however, long-term use during pregnancy may result in harm.[1] Methylprednisolone is in the glucocorticoid family of medication.[3]

Methylprednisolone was approved for medical use in 1955.[4] It is on the World Health Organization's List of Essential Medicines.[5] Methylprednisolone is available as a generic medication.[3] In 2017, it was the 157th most commonly prescribed medication in the United States, with more than four million prescriptions.[6][7] 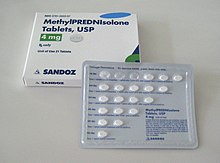 Some 4-mg methylprednisolone tablets by Sandoz 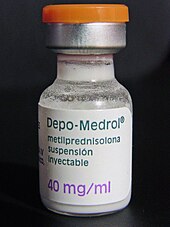 Like most adrenocortical steroids, methylprednisolone is typically used for its anti-inflammatory effects. However, glucocorticoids have a wide range of effects, including changes to metabolism and immune responses. The list of medical conditions for which methylprednisolone is prescribed is rather long and is similar to other corticosteroids such as prednisolone. Common uses include arthritis therapy and short-term treatment of bronchial inflammation or acute bronchitis due to various respiratory diseases. It is used both in the treatment of acute periods and long-term management of autoimmune diseases, most notably systemic lupus erythematosus. It is also used as a treatment for multiple sclerosis, where it can favour recovery from acute attacks.[8]

Another potential use of methylprednisolone is for vestibular neuritis.[9]

After egg retrieval for a cycle of in vitro fertilization, methylprednisolone may be prescribed to prevent the body from rejecting the embryos being transferred, up to the time of implantation.[10][11]

Long-term use of methylprednisolone, as with all corticosteroids, can be associated with hyperglycemia, decreased resistance to infection, swelling of face, weight gain, congestive cardiac insufficiency, fluid and sodium retention, edema, hypertension, increased eye pressure, glaucoma, osteoporosis, and psychosis, especially when used at high doses.[12][13] The most serious side effect occurs after the adrenal glands cease natural production of cortisol, which methylprednisolone will replace. Abrupt cessation of the drug after this occurs can result in a condition known as Addisonian crisis, which can be fatal. To prevent this, the drug is usually prescribed with a tapering dose, including a predosed "dose pack" detailing a specific number of tablets to take at designated times over a several-day period. Pharmacists sometimes advise that this drug may cause sleeplessness and "down" moods.

Measles and chicken pox are very dangerous and potentially fatal for people on methylprednisolone therapy. Exposure to these infections is especially risky for people who are not immune to them. Exposures like these should be reported to a physician immediately, and may be treated with prophylactic immunoglobulin. Also, live, attenuated vaccines can be bad for people taking immunosuppressive doses of methylprednisolone. The exception to this rule is patients receiving complete corticosteroid replacement therapy, e.g., for Addison's disease, who may follow standard immunization protocols.

Unbound glucocorticoids cross cell membranes and bind with high affinity to specific cytoplasmic receptors, modifying transcription and protein synthesis. By this mechanism, glucocorticoids can inhibit leukocyte infiltration at the site of inflammation, interfere with mediators of inflammatory response, and suppress humoral immune responses. The anti-inflammatory actions of corticosteroids are thought to involve phospholipase A2 inhibitory proteins, lipocortins, which control the biosynthesis of potent mediators of inflammation such as prostaglandins and leukotrienes.

In 2017, it was the 157th most commonly prescribed medication in the United States, with more than four million prescriptions.[6][7]