Zopiclone, sold under the brand name Imovane among others, is a medication used to treat difficulty sleeping.[3] Zopiclone is only recommended for short-term use, usually no more than a week or two.[4] It is taken by mouth.[5]

Side effects include decreased cognitive function, the body becoming accustomed to the effects (tolerance), rapid return of trouble sleeping when stopped, falls, and addiction.[3] Other side effects include a dry mouth and behavioral changes.[5] Use is not recommended in people with significant sleep apnea.[5] Withdrawal symptoms may occur if rapidly stopped.[5] Use is not recommended during pregnancy, specifically late pregnacy as such use may result in problems in the baby at birth.[5] Use is also not recommended when breastfeeding.[5] Zopiclone is a sedative and Z-drug.[4] It works via the benzodiazepine receptor.[6] 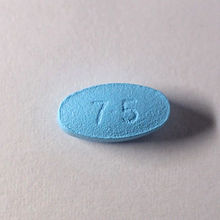 Zopiclone is used for the short-term treatment of insomnia where sleep initiation or sleep maintenance are prominent symptoms. Long-term use is not recommended, as tolerance, dependence, and addiction can occur.[9][10] One low-quality study found that zopiclone is ineffective in improving sleep quality or increasing sleep time in shift workers - more research in this area has been recommended.[11]

A review of the management of insomnia in the elderly found evidence for nondrug treatments. Compared with the benzodiazepines, zopiclone, offer few if any advantages in efficacy or tolerability. Agents such as the melatonin receptor agonists may be more suitable for chronic insomnia in elderly people. Long-term use of sedative-hypnotics for insomnia lacks evidence is discouraged for reasons that include concerns about side effects.[12] In addition, the effectiveness and safety of long-term use of nonbenzodiazepine hypnotic drugs remains to be determined.[12]

The typical dose is 7.5 mg once per day just before bed.[5] In older people, those with mild or moderate liver problems, those with kidney problems, and those with breathing problems half that dose should be used.[5]

People muscle weakness due to myasthenia gravis or have poor respiratory reserves due to severe chronic bronchitis, emphysema, or other lung disease, nor can a people with any untreated abnormality of the thyroid gland.[16]

Zopiclone causes impaired driving skills similar to those of benzodiazepines. Long-term users of hypnotic drugs for sleep disorders develop only partial tolerance to adverse effects on driving with users of hypnotic drugs even after 1 year of use still showing an increased motor vehicle accident rate.[17] Patients who drive motor vehicles should not take zopiclone unless they stop driving due to a significant increased risk of accidents in zopiclone users.[18] Zopiclone induces impairment of psychomotor function.[19][20] Driving or operating machinery should be avoided after taking zopiclone as effects can carry over to the next day, including impaired hand eye coordination.[21][22]

It causes similar alterations on EEG readings and sleep architecture as benzodiazepines and causes disturbances in sleep architecture on withdrawal.[23][24] Zopiclone reduces both delta waves and the number of high-amplitude delta waves whilst increasing low-amplitude waves.[25] Zopiclone reduces the total amount of time spent in REM sleep as well as delaying its onset.[26][27] Cognitive behavioral therapy has been found to be superior to zopiclone in the treatment of insomnia and has been found to have lasting effects on sleep quality for at least a year after therapy.[28][29][30][31]

Zopiclone, similar to other benzodiazepines and nonbenzodiazepine hypnotic drugs, causes impairments in body balance and standing steadiness in individuals who wake up at night or the next morning. Falls and hip fractures are frequently reported. The combination with alcohol consumption increases these impairments. Partial, but incomplete tolerance develops to these impairments.[32] Zopiclone increases postural sway and increases the number of falls in older people, as well as cognitive side effects. Falls are a significant cause of death in older people.[33][34][35]

Zopiclone is sometimes used as a method of suicide.[36] It has a similar fatality index to that of benzodiazepine drugs, apart from temazepam, which is particularly toxic in overdose.[37][38][39] Deaths have occurred from zopiclone overdose, alone or in combination with other drugs.[40][41][42] Overdose of zopiclone may present with excessive sedation and depressed respiratory function that may progress to coma and possibly death.[43] Zopiclone combined with alcohol, opiates, or other central nervous system depressants may be even more likely to lead to fatal overdoses. Zopiclone overdosage can be treated with the benzodiazepine receptor antagonist flumazenil, which displaces zopiclone from its binding site on the benzodiazepine receptor, thereby rapidly reversing its effects.[44][45] Serious effects on the heart may also occur from a zopiclone overdose[46][47] when combined with piperazine.[48]

Death certificates show the number of zopiclone-related deaths is on the rise.[49] When taken alone, it usually is not fatal, but when mixed with alcohol or other drugs such as opioids, or in patients with respiratory, or hepatic disorders, the risk of a serious and fatal overdose increases.[50][51]

Alcohol has an additive effect when combined with zopiclone, enhancing the adverse effects including the overdose potential of zopiclone significantly.[54][55] Due to these risks and the increased risk for dependence, alcohol should be avoided when using zopiclone.[54]

Erythromycin appears to increase the absorption rate of zopiclone and prolong its elimination half-life, leading to increased plasma levels and more pronounced effects. Itraconazole has a similar effect on zopiclone pharmacokinetics as erythromycin. The elderly may be particularly sensitive to the erythromycin and itraconazole drug interaction with zopiclone. Temporary dosage reduction during combined therapy may be required, especially in the elderly.[56][57] Rifampicin causes a very notable reduction in half-life of zopiclone and peak plasma levels, which results in a large reduction in the hypnotic effect of zopiclone. Phenytoin and carbamazepine may also provoke similar interactions.[58] Ketoconazole and sulfaphenazole interfere with the metabolism of zopiclone.[59] Nefazodone impairs the metabolism of zopiclone leading to increased zopiclone levels and marked next-day sedation.[60]

In EEG studies, zopiclone significantly increases the energy of the beta frequency band and shows characteristics of high-voltage slow waves, desynchronization of hippocampal theta waves, and an increase in the energy of the delta frequency band. Zopiclone increases both stage 2 and slow-wave sleep (SWS), while zolpidem, an α1-selective compound, increases only SWS and causes no effect on stage 2 sleep. Zopiclone is less selective to the α1 site and has higher affinity to the α2 site than zaleplon. Zopiclone is therefore very similar pharmacologically to benzodiazepines.[72] 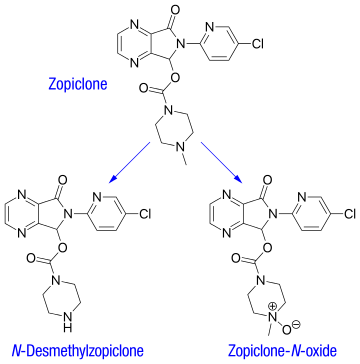 After oral administration, zopiclone is rapidly absorbed, with a bioavailability around 75–80%. Time to peak plasma concentration is 1–2 hours. A high-fat meal preceding zopiclone administration does not change absorption (as measured by AUC), but reduces peak plasma levels and delays its occurrence, thus may delay the onset of therapeutic effects.

The plasma protein-binding of zopiclone has been reported to be weak, between 45 and 80% (mean 52–59%). It is rapidly and widely distributed to body tissues, including the brain, and is excreted in urine, saliva, and breast milk. Zopiclone is partly extensively metabolized in the liver to form an active N-demethylated derivative (N-desmethylzopiclone) and an inactive zopiclone-N-oxide. Hepatic enzymes playing the most significant role in zopiclone metabolism are CYP3A4 and CYP2E1. In addition, about 50% of the administered dose is decarboxylated and excreted via the lungs. In urine, the N-demethyl and N-oxide metabolites account for 30% of the initial dose. Between 7 and 10% of zopiclone is recovered from the urine, indicating extensive metabolism of the drug before excretion. The terminal elimination half-life of zopiclone ranges from 3.5 to 6.5 hours (5 hours on average).[2]

The pharmacokinetics of zopiclone are altered by aging and are influenced by renal and hepatic functions.[73] In severe chronic kidney failure, the area under the curve value for zopiclone was larger and the half-life associated with the elimination rate constant longer, but these changes were not considered to be clinically significant.[74] Sex and race have not been found to interact with pharmacokinetics of zopiclone.[2]

Zopiclone may be measured in blood, plasma, or urine by chromatographic methods. Plasma concentrations are typically less than 100 μg/l during therapeutic use, but frequently exceed 100 μg/l in automotive vehicle operators arrested for impaired driving ability and may exceed 1000 μg/l in acutely poisoned patients. Post mortem blood concentrations are usually in a range of 0.4-3.9 mg/l in victims of fatal acute overdose.[76][77][78]

Zopiclone was developed and first introduced in 1986 by Rhône-Poulenc S.A., now part of Sanofi-Aventis, the main worldwide manufacturer. Initially, it was promoted as an improvement on benzodiazepines, but a recent meta-analysis found it was no better than benzodiazepines in any of the aspects assessed.[79] On April 4, 2005, the U.S. Drug Enforcement Administration listed zopiclone under schedule IV, due to evidence that the drug has addictive properties similar to benzodiazepines.

Zopiclone, as traditionally sold worldwide, is a racemic mixture of two stereoisomers, only one of which is active.[80][81] In 2005, the pharmaceutical company Sepracor of Marlborough, Massachusetts began marketing the active stereoisomer eszopiclone under the name Lunesta in the United States. This had the consequence of placing what is a generic drug in most of the world under patent control in the United States. Generic forms of Lunesta have since become available in the United States. Zopiclone is currently available off-patent in a number of European countries, as well as Brazil, Canada, and Hong Kong. The eszopiclone/zopiclone difference is in the dosage—the strongest eszopiclone dosage contains 3 mg of the therapeutic stereoisomer, whereas the highest zopiclone dosage (10 mg) contains 5 mg of the active stereoisomer[citation needed]. The two agents have not yet been studied in head-to-head clinical trials to determine the existence of any potential clinical differences (efficacy, side effects, developing dependence on the drug, safety, etc.).

Zopiclone has the potential for misuse and dosage escalation, drug abuse, and drug dependence. It is abused orally and sometimes intravenously, and often combined with alcohol to achieve a combined sedative hypnotic—alcohol euphoria. Patients abusing the drug are also at risk of dependence. Withdrawal symptoms can be seen after long-term use of normal doses even after a gradual reduction regimen. The Compendium of Pharmaceuticals and Specialties recommends zopiclone prescriptions not exceed 7 to 10 days, owing to concerns of addiction, tolerance, and physical dependence.[82] Two types of drug misuse can occur: either recreational misuse, wherein the drug is taken to achieve a high, or when the drug is continued long-term against medical advice.[83][84] Zopiclone may be more addictive than benzodiazepines.[85] Those with a history of substance misuse or mental health disorders may be at an increased risk of high-dose zopiclone misuse.[86] High dose misuse of zopiclone and increasing popularity amongst drug abusers who have been prescribed with zopiclone[87] The symptoms of zopiclone addiction can include depression, dysphoria, hopelessness, slow thoughts, social isolation, worrying, sexual anhedonia, and nervousness.[88]

Zopiclone and other sedative hypnotic drugs are detected frequently in cases of people suspected of driving under the influence of drugs. Other drugs, including the benzodiazepines and zolpidem, are also found in high numbers of suspected drugged drivers. Many drivers have blood levels far exceeding the therapeutic dose range and often in combination with other alcohol, illegal, or prescription drugs of abuse, suggesting a high degree of abuse potential for benzodiazepines, zolpidem, and zopiclone.[89][90] Zopiclone, which at prescribed doses causes moderate impairment the next day, has been estimated to increase the risk of vehicle accidents by 50%, causing an increase of 503 excess accidents per 100,000 persons. Zaleplon or other nonimpairing sleep aids were recommended be used instead of zopiclone to reduce traffic accidents.[91] Zopiclone as with other hypnotic drugs is sometimes abused to carry out criminal acts such as sexual assaults.[92]

Zopiclone has crosstolerance with barbiturates and is able to suppress barbiturate withdrawal signs. It is frequently self-administered intravenously in studies on monkeys, suggesting a high risk of abuse potential.[93]

Zopiclone is in the top ten medications obtained using a false prescription in France.[2]