Theophylline, sold under various brand names, is a medication used for chronic obstructive pulmonary disease (COPD) and asthma.[2] Use has largely been replaced by other bronchodilators with greater safety.[3] It is used by mouth or by injection into a vein.[2] Theophylline blood levels require periodic monitoring.[4]

Common side effects include nausea, headache, trouble sleeping, abdominal pain, palpitations, and diarrhea.[2] Severe side effects may include low blood potassium.[4] Excessive doses can result in severe side effects.[4] The dose may need to be adjusted depending on if someone smokes, uses alcohol, or has liver or heart problems.[4] Use during pregnancy is of unclear safety.[1] It is in the xanthine family of medications.[2] How it works is not entirely clear.[2]

Theophylline was isolated in 1888 from the tea plant (Camellia sinensis).[3] It is available as a generic medication.[2] In the United Kingdom a month of medication costs the NHS about 5 pounds.[4] 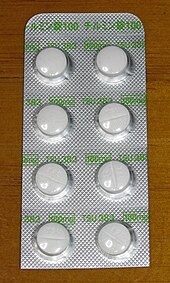 Uses of theophylline are include chronic obstructive pulmonary disease (COPD) and asthma.[2] Such use has largely been replaced by other bronchodilators with greater safety.[3]

Apnea of prematurity; however, caffeine is preferred for this use[2][5]

The use of theophylline is complicated by its interaction with various drugs and by the fact that it has a narrow therapeutic window. Its use must be monitored by direct measurement of serum theophylline levels to avoid toxicity. It can also cause nausea, diarrhea, increase in heart rate, abnormal heart rhythms, and CNS excitation (headaches, insomnia, irritability, dizziness and lightheadedness).[6][7] Seizures can also occur in severe cases of toxicity, and are considered to be a neurological emergency.[8] Its toxicity is increased by erythromycin, cimetidine, and fluoroquinolones, such as ciprofloxacin. Some lipid-based formulations of theophylline can result in toxic theophylline levels when taken with fatty meals, an effect called dose dumping, but this does not occur with most formulations of theophylline.[9] Theophylline toxicity can be treated with beta blockers. In addition to seizures, tachyarrhythmias are a major concern.[10] Theophylline should not be used in combination with the SSRI fluvoxamine.[11][12][13]

The main actions of theophylline involve:

Like other methylated xanthine derivatives, theophylline is both a

Theophylline has been shown to inhibit TGF-beta-mediated conversion of pulmonary fibroblasts into myofibroblasts in COPD and asthma via cAMP-PKA pathway and suppresses COL1 mRNA, which codes for the protein collagen.[20]

It has been shown that theophylline may reverse the clinical observations of steroid insensitivity in patients with COPD and asthmatics who are active smokers (a condition resulting in oxidative stress) via a distinctly separate mechanism. Theophylline in vitro can restore the reduced HDAC (histone deacetylase) activity that is induced by oxidative stress (i.e., in smokers), returning steroid responsiveness toward normal.[21] Furthermore, theophylline has been shown to directly activate HDAC2.[21] (Corticosteroids switch off the inflammatory response by blocking the expression of inflammatory mediators through deacetylation of histones, an effect mediated via histone deacetylase-2 (HDAC2). Once deacetylated, DNA is repackaged so that the promoter regions of inflammatory genes are unavailable for binding of transcription factors such as NF-κB that act to turn on inflammatory activity. It has recently been shown that the oxidative stress associated with cigarette smoke can inhibit the activity of HDAC2, thereby blocking the anti-inflammatory effects of corticosteroids.)

When theophylline is administered intravenously, bioavailability is 100%. [22]

Theophylline is metabolized extensively in the liver (up to 70%). It undergoes N-demethylation via cytochrome P450 1A2. It is metabolized by parallel first order and Michaelis-Menten pathways. Metabolism may become saturated (non-linear), even within the therapeutic range. Small dose increases may result in disproportionately large increases in serum concentration. Methylation to caffeine is also important in the infant population. Smokers and people with hepatic (liver) impairment metabolize it differently. Both THC and nicotine have been shown to increase the rate of theophylline metabolism.[23]

Theophylline is excreted unchanged in the urine (up to 10%). Clearance of the drug is increased in children (age 1 to 12), teenagers (12 to 16), adult smokers, elderly smokers, as well as in cystic fibrosis, and hyperthyroidism. Clearance of the drug is decreased in these conditions: elderly, acute congestive heart failure, cirrhosis, hypothyroidism and febrile viral illnesses.

On UV-visible spectroscopy theophylline is soluble in 0.1N NaOH and absorbs maximally at 277 nm with an extinction coefficient of 10,200 (cm−1/M).[24]

On proton nuclear magnetic resonance spectroscopy (1H-NMR) the characteristic signals, distinguishing theophylline from related methylxanthines, are approximately 3.23δ and 3.41δ, corresponding to the unique methylation possessed by theophylline. The remaining proton signal, at 8.01δ, corresponds to the proton on the imidazole ring, not transferred between the nitrogen. The transferred proton between the nitrogen is a variable proton and only exhibits a signal under certain conditions.[25]

On carbon nuclear magnetic resonance spectroscopy (13C-NMR) the unique methylation of theophylline corresponds to the following signals: 27.7δ and 29.9δ. The remaining signals correspond to carbons characteristic of the xanthine backbone.[26]

Theophylline is naturally found in cocoa beans. Amounts as high as 3.7 mg/g have been reported in Criollo cocoa beans.[27]

Trace amounts of theophylline are also found in brewed tea, although brewed tea provides only about 1 mg/l,[28] which is less than a therapeutic dose.

Trace amounts of theophylline are also found in guarana (Paullinia cupana) and in kola nuts cola (plant) [29] A small amount of theophylline is one of the products of caffeine metabolic processing in the liver.[30]

Theophylline was first extracted from tea leaves and chemically identified around 1888 by the German biologist Albrecht Kossel.[31][32] Seven years later, a chemical synthesis starting with 1,3-dimethyluric acid was described by Emil Fischer and Lorenz Ach.[33] The Traube purine synthesis, an alternative method to synthesize theophylline, was introduced in 1900 by another German scientist, Wilhelm Traube.[34] Theophylline's first clinical use came in 1902 as a diuretic.[35] It took an additional 20 years until it was first reported as an asthma treatment.[36] The drug was prescribed in a syrup up to the 1970s as Theostat 20 and Theostat 80, and by the early 1980s in a tablet form called Quibron.

Current research regarding theophylline-based therapies are oriented towards employing theophylline, as well as other methylxanthines as natural scaffolding for new bronchodilatory pharmaceuticals. In 2017, Mohammed, et al.[37] demonstrated potential derivitization of methylxanthines to produce significant broncodilatory effects in a small mouse study group. However, additional work is oriented towards limiting the interactions of theophylline-based therapies with other drugs and structures, as theophylline has been demonstrated as an effective adjunctive therapy[38] in various diseases. These interactions include maintaining, for example, its activity with HDAC, but eliminating its stimulatory behavior (or rather its adenosine-antagonist behavior).[39]