Chlordiazepoxide, sold under the trade name Librium among others, is a medication of the benzodiazepine type, used to treat alcohol withdrawal and anxiety disorders.[2] It is generally taken by mouth.[2] Use is recommended for less than 4 weeks.[4] Onset of effects are rapid and last for up to three days.[3]

Common side effects include sleepiness, poor coordination, and confusion.[2] Other side effects may include movement disorders, erectile dysfunction, and bone marrow problems.[5] Use during pregnancy may harm the baby and it is not recommended during breastfeeding.[2][5] Smaller doses are recommended in those with liver problems.[5] Chlordiazepoxide, together with its metabolites, has a long half life.[2] 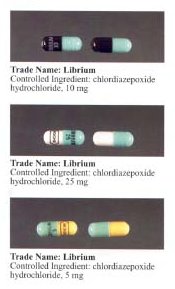 Chlordiazepoxide is indicated for the short-term (2–4 weeks) treatment of anxiety that is severe and disabling or subjecting the person to unacceptable distress. It is also indicated as a treatment for the management of acute alcohol withdrawal syndrome.[4]

It can sometimes be prescribed to ease symptoms of irritable bowel syndrome combined with clidinium bromide as a fixed dose medication, Librax.[8]

The dose for anxiety is often 10 mg three times per day with smaller doses used in older people.[5]

Sedative drugs and sleeping pills, including chlordiazepoxide, have been associated with an increased risk of death.[9] The studies had many limitations: possibly tending to overestimate risk, such as possible confounding by indication with other risk factors; confusing hypnotics with drugs having other indications;

Common side-effects of chlordiazepoxide include:[10]

In September 2020, the U.S. Food and Drug Administration (FDA) required the boxed warning be updated for all benzodiazepine medicines to describe the risks of abuse, misuse, addiction, physical dependence, and withdrawal reactions consistently across all the medicines in the class.[14]

Use of chlordiazepoxide should be avoided in individuals with the following conditions:

Chlordiazepoxide is generally considered an inappropriate benzodiazepine for the elderly due to its long elimination half-life and the risks of accumulation.[15] Benzodiazepines require special precaution if used in the elderly, pregnancy, children, alcohol- or drug-dependent individuals and individuals with comorbid psychiatric disorders.[16]

Chlordiazepoxide taken during pregnancy can cause a postnatal benzodiazepine withdrawal syndrome.[20]

An individual who has consumed excess chlordiazepoxide may display some of the following symptoms:

In animal models, the oral median lethal dose of chlordiazepoxide is 537 mg/kg.

Chlordiazepoxide is a drug that is very frequently involved in drug intoxication, including overdose.[23] Chlordiazepoxide overdose is considered a medical emergency and, in general, requires the immediate attention of medical personnel. The antidote for an overdose of chlordiazepoxide (or any other benzodiazepine) is flumazenil. Flumazenil should be given with caution as it may precipitate severe withdrawal symptoms in benzodiazepine-dependent individuals.

Despite its name, chlordiazepoxide is not an epoxide; they are formed from different roots.

Chlordiazepoxide (initially called methaminodiazepoxide) was the first benzodiazepine to be synthesized in the mid-1950s. The synthesis was derived from work on a class of dyes, quinazolone-3-oxides.[citation needed] It was discovered by accident when in 1957 tests revealed that the compound had hypnotic, anxiolytic, and muscle relaxant effects. "The story of the chemical development of Librium and Valium was told by Sternbach. The serendipity involved in the invention of this class of compounds was matched by the trials and errors of the pharmacologists in the discovery of the tranquilizing activity of the benzodiazepines. The discovery of Librium in 1957 was due largely to the dedicated work and observational ability of a gifted technician, Beryl Kappell. For some seven years she had been screening compounds by simple animal tests for muscle relaxant activity..."[32] Three years later chlordiazepoxide was marketed as a therapeutic benzodiazepine medication under the brand name Librium. Following chlordiazepoxide, in 1963 diazepam hit the market under the brand name Valium—and was followed by many further benzodiazepine compounds over the subsequent years and decades.[33]

In 1959 it was used by over 2,000 physicians and more than 20,000 patients. It was described as "chemically and clinically different from any of the tranquilizers, psychic energizers or other psychotherapeutic drugs now available." During studies, chlordiazepoxide induced muscle relaxation and a quieting effect on laboratory animals like mice, rats, cats, and dogs. Fear and aggression were eliminated in much smaller doses than those necessary to produce hypnosis. Chlordiazepoxide is similar to phenobarbital in its anticonvulsant properties. However, it lacks the hypnotic effects of barbiturates. Animal tests were conducted in the Boston Zoo and the San Diego Zoo. Forty-two hospital patients admitted for acute and chronic alcoholism, and various psychoses and neuroses were treated with chlordiazepoxide. In a majority of the patients, anxiety, tension, and motor excitement were "effectively reduced." The most positive results were observed among alcoholic patients. It was reported that ulcers and dermatologic problems, both of which involving emotional factors, were reduced by chlordiazepoxide.[35]

In 1963, Carl F. Essig of the Addiction Research Center of the National Institute of Mental Health stated that meprobamate, glutethimide, ethinamate, ethchlorvynol, methyprylon and chlordiazepoxide as drugs whose usefulness “can hardly be questioned.” However, Essig labeled these “newer products” as “drugs of addiction,” like barbiturates, whose habit-forming qualities were more widely known. He mentioned a 90-day study of chlordiazepoxide, which concluded that the automobile accident rate among 68 users was 10 times higher than normal. Participants' daily dosage ranged from 5 to 100 milligrams.[37]

Chlordiazepoxide is a drug of potential misuse and is frequently detected in urine samples of drug users who have not been prescribed the drug.[38]

Internationally, chlordiazepoxide is a Schedule IV controlled drug under the Convention on Psychotropic Substances.[39]