From WikiProjectMed
Jump to navigation Jump to search
For other uses, see Tremor (disambiguation).

A tremor is an involuntary,[1] somewhat rhythmic, muscle contraction and relaxation involving oscillations or twitching movements of one or more body parts. It is the most common of all involuntary movements and can affect the hands, arms, eyes, face, head, vocal folds, trunk, and legs. Most tremors occur in the hands. In some people, a tremor is a symptom of another neurological disorder. A very common tremor is the teeth chattering, usually induced by cold temperatures or by fear.

Tremor is most commonly classified by clinical features and cause or origin. Some of the better-known forms of tremor, with their symptoms, include the following:

Tremor can result from other conditions as well

Tremor can be a symptom associated with disorders in those parts of the brain that control muscles throughout the body or in particular areas, such as the hands. Neurological disorders or conditions that can produce tremor include multiple sclerosis, stroke, traumatic brain injury, chronic kidney disease and a number of neurodegenerative diseases that damage or destroy parts of the brainstem or the cerebellum, Parkinson's disease being the one most often associated with tremor. Lesions of the Guillain-Mollaret triangle (also called myoclonic triangle or dentato-rubro-olivary pathway) impair the predictions performed by the cerebellum, causing repetitive muscle discharges by triggering oscillatory activity in the central nervous system.[5] Other causes include the use of drugs (such as amphetamines, cocaine, caffeine, corticosteroids, SSRIs) or alcohol, mercury poisoning, or the withdrawal of drugs such as alcohol or benzodiazepine. Tremors can also be seen in infants with phenylketonuria (PKU), overactive thyroid or liver failure. Tremors can be an indication of hypoglycemia, along with palpitations, sweating and anxiety. Tremor can also be caused by lack of sleep, lack of vitamins, or increased stress.[6][7] Deficiencies of magnesium and thiamine[8] have also been known to cause tremor or shaking, which resolves when the deficiency is corrected.[9] Tremors in animals can also be caused by some spider bites, e.g. the redback spider of Australia.[citation needed] 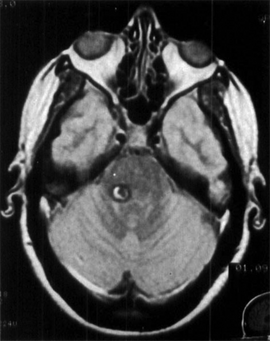 Orthostatic tremor due to a lesion in posterior fossa

During a physical exam, a doctor can determine whether the tremor occurs primarily during action or at rest. The doctor will also check for tremor symmetry, any sensory loss, weakness or muscle atrophy, or decreased reflexes. A detailed family history may indicate if the tremor is inherited. Blood or urine tests can detect thyroid malfunction, other metabolic causes, and abnormal levels of certain chemicals that can cause tremor. These tests may also help to identify contributing causes, such as drug interaction, chronic alcoholism, or another condition or disease. Diagnostic imaging using CT or MRI imaging may help determine if the tremor is the result of a structural defect or degeneration of the brain.[citation needed]

The doctor will perform a neurological examination to assess nerve function and motor and sensory skills. The tests are designed to determine any functional limitations, such as difficulty with handwriting or the ability to hold a utensil or cup. The patient may be asked to place a finger on the tip of her or his nose, draw a spiral, or perform other tasks or exercises.[citation needed]

The doctor may order an electromyogram to diagnose muscle or nerve problems. This test measures involuntary muscle activity and muscle response to nerve stimulation. The selection of the sensors used is important. In addition to studies of muscle activity, tremor can be assessed with accuracy using accelerometers .[10]

The degree of tremor should be assessed in four positions. The tremor can then be classified by which position most accentuates the tremor:[11]

There is no cure for most tremors. The appropriate treatment depends on accurate diagnosis of the cause. Some tremors respond to treatment of the underlying condition. For example, in some cases of psychogenic tremor, treating the patient's underlying psychological problem may cause the tremor to disappear. A few medications can help relieve symptoms temporarily.[citation needed]

Medications remain the basis of therapy in many cases. Symptomatic drug therapy is available for several forms of tremor:

Eliminating tremor “triggers” such as caffeine and other stimulants from the diet is often recommended. Essential tremor may benefit from slight doses of ethanol, but the potential negative consequences of regular ethanol intake need to be taken into account. Beta blockers have been used as an alternative to alcohol in sports such as competitive dart playing and carry less potential for addiction.

Physical therapy and occupational therapy may help to reduce tremor and improve coordination and muscle control for some patients. A physical therapist or occupational therapist will evaluate the patient for tremor positioning, muscle control, muscle strength, and functional skills. Teaching the patient to brace the affected limb during the tremor or to hold an affected arm close to the body is sometimes useful in gaining motion control. Coordination and balancing exercises may help some patients. Some occupational therapists recommend the use of weights, splints, other adaptive equipment, and special plates and utensils for eating.

Surgical intervention such as thalamotomy and deep brain stimulation may ease certain tremors. These surgeries are usually performed only when the tremor is severe and does not respond to drugs. Response can be excellent.

Thalamotomy, involving the creation of lesions in the brain region called the thalamus, is quite effective in treating patients with essential, cerebellar, or Parkinsonian tremor. This in-hospital procedure is performed under local anesthesia, with the patient awake. After the patient's head is secured in a metal frame, the surgeon maps the patient's brain to locate the thalamus. A small hole is drilled through the skull and a temperature-controlled electrode is inserted into the thalamus. A low-frequency current is passed through the electrode to activate the tremor and to confirm proper placement. Once the site has been confirmed, the electrode is heated to create a temporary lesion. Testing is done to examine speech, language, coordination, and tremor activation, if any. If no problems occur, the probe is again heated to create a 3-mm permanent lesion. The probe, when cooled to body temperature, is withdrawn and the skull hole is covered. The lesion causes the tremor to permanently disappear without disrupting sensory or motor control.

Deep brain stimulation (DBS) uses implantable electrodes to send high-frequency electrical signals to the thalamus. The electrodes are implanted as described above. The patient uses a hand-held magnet to turn on and turn off a pulse generator that is surgically implanted under the skin. The electrical stimulation temporarily disables the tremor and can be “reversed,” if necessary, by turning off the implanted electrode. Batteries in the generator last about 5 years and can be replaced surgically. DBS is currently used to treat parkinsonian tremor and essential tremor. It is also applied successfully for other rare causes of tremor.

The most common side effects of tremor surgery include dysarthria (problems with motor control of speech), temporary or permanent cognitive impairment (including visual and learning difficulties), and problems with balance.

As well as medication, rehabilitation programmes and surgical interventions, the application of biomechanical loading on tremor movement has been shown to be a technique that is able to suppress the effects of tremor on the human body. It has been established in the literature[citation needed] that most of the different types of tremor respond to biomechanical loading. In particular, it has been clinically tested that the increase of damping or inertia in the upper limb leads to a reduction of the tremorous motion. Biomechanical loading relies on an external device that either passively or actively acts mechanically in parallel to the upper limb to counteract tremor movement. This phenomenon gives rise to the possibility of an orthotic management of tremor.

Starting from this principle, the development of upper-limb non-invasive ambulatory robotic exoskeletons is presented as a promising solution for patients who cannot benefit from medication to suppress the tremor. In this area robotic exoskeletons have emerged, in the form of orthoses, to provide motor assistance and functional compensation to disabled people. An orthosis is a wearable device that acts in parallel to the affected limb. In the case of tremor management, the orthosis must apply a damping or inertial load to a selected set of limb articulations.

Recently, some studies demonstrated that exoskeletons could achieve a consistent 40% of tremor power reduction for all users, being able to attain a reduction ratio in the order of 80% tremor power in specific joints of users with severe tremor.[12] In addition, the users reported that the exoskeleton did not affect their voluntary motion. These results indicate the feasibility of tremor suppression through biomechanical loading.

The main drawbacks of this mechanical management of tremor are (1) the resulting bulky solutions, (2) the inefficiency in transmitting loads from the exoskeleton to the human musculo-skeletal system and (3) technological limitations in terms of actuator technologies. In this regard, current trends in this field are focused on the evaluation of the concept of biomechanical loading of tremor through selective Functional Electrical Stimulation (FES) based on a (Brain-to-Computer Interaction) BCI-driven detection of involuntary (tremor) motor activity.[13]