Sumatriptan, sold under the brand name Imitrex among others, is a medication used to treat migraine headaches and cluster headaches.[2] It is taken by mouth, in the nose, or by injection under the skin.[3] Effects generally occur within three hours.[3]

Common side effects include chest pressure, feeling tired, feeling of the world spinning, vomiting, tingling.[3] Serious side effects may include serotonin syndrome, heart attacks, strokes, and seizures.[3] With excessive use medication overuse headaches may occur.[3] It is unclear if use in pregnancy or breastfeeding is safe.[4] How it works is not entirely clear.[3] It is in the triptan class of medications.[3]

Sumatriptan was patented in 1982 and approved for medical use in 1991.[5] It is available as a generic medication.[2] In the United Kingdom it costs the NHS about £1 per dose as of 2019.[2] In the United States the wholesale cost of this amount is about US$0.60.[6] In 2017, it was the 97th most commonly prescribed medication in the United States, with more than eight million prescriptions.[7][8] It is also available as the combination product sumatriptan/naproxen at a cost of US$50 per dose.[6]

Sumatriptan is effective for ending or relieving the intensity of migraine and cluster headaches.[9] It is most effective when taken early after the start of the pain.[9] Injected sumatriptan is more effective than other formulations.[10]

Overdose of sumatriptan can cause sulfhemoglobinemia, a rare condition in which the blood changes from red to green, due to the integration of sulfur into the hemoglobin molecule.[11] If sumatriptan is discontinued, the condition reverses within a few weeks.

Serious cardiac events, including some that have been fatal, have occurred following the use of sumatriptan injection or tablets. Events reported have included coronary artery vasospasm, transient myocardial ischemia, myocardial infarction, ventricular tachycardia, and ventricular fibrillation (V-Fib).[12][citation needed]

Sumatriptan is structurally similar to serotonin (5-HT), and is a 5-HT receptor (types 5-HT1D and 5-HT1B[14]) agonist. Sumatriptan's primary therapeutic effect, however, is in its inhibition of the release of Calcitonin gene-related peptide (CGRP), likely through its 5-HT1D/1B receptor-agonist action.[15] This is substantiated by the efficacy of newly developed CGRP antagonists and antibodies in the preventative treatment of migraine.[16] However, how agonism of the 5-HT1D/1B receptors inhibits CGRP release is not fully understood. CGRP is believed to cause sensitization of trigeminal nociceptive neurons, contributing to the pain experienced in migraine.[17]

Sumatriptan is also shown to decrease the activity of the trigeminal nerve, which presumably accounts for sumatriptan's efficacy in treating cluster headaches. The injectable form of the drug has been shown to abort a cluster headache within 30 minutes in 77% of cases.[18]

Sumatriptan is administered in several forms: tablets, subcutaneous injection, and nasal spray. Oral administration (as the succinate salt) suffers from poor bioavailability, partly due to presystemic metabolism—some of it gets broken down in the stomach and bloodstream before it reaches the target arteries. A new rapid-release tablet formulation has the same bioavailability, but the maximum concentration is achieved on average 10–15 minutes earlier. When injected, sumatriptan is faster-acting (usually within 10 minutes), but the effect lasts for a shorter time. Sumatriptan is metabolised primarily by monoamine oxidase A into 2‐{5‐[(methylsulfamoyl)methyl]‐indole‐3‐yl}acetic acid which is then conjugated to glucuronic acid. These metabolites are excreted in the urine and bile. Only about 3% of the active drug may be recovered unchanged.

There is no simple, direct relationship between sumatriptan concentration (pharmacokinetics) per se in the blood and its anti-migraine effect (pharmacodynamics). This paradox has, to some extent, been resolved by comparing the rates of absorption of the various sumatriptan formulations, rather than the absolute amounts of drug that they deliver.[19][20] 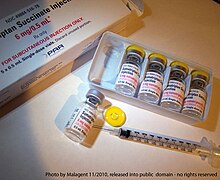 In 1991, Glaxo received approval for sumatriptan, which was the first available triptan. In the United States, it is available only by medical prescription (and is frequently limited, without prior authorization, to a quantity of nine in a 30-day period). This requirement for a medical prescription also exists in Australia.[21] However, it can be bought over the counter in the UK[22] and Sweden.[23] Several dosage forms for sumatriptan have been approved,[by whom?] including tablets, solution for injection, and nasal inhalers.[citation needed]

In July 2009, the US FDA approved a single-use jet injector formulation of sumatriptan. The device delivers a subcutaneous injection of 6 mg sumatriptan, without the use of a needle. Autoinjectors with needles have been previously available in Europe and North America for several years.[24]

Phase III studies with an iontophoretic transdermal patch (Zelrix/Zecuity) started in July 2008.[25] This patch uses low voltage controlled by a pre-programmed microchip to deliver a single dose of sumatriptan through the skin within 30 minutes.[26][27] Zecuity was approved by the US FDA in January 2013.[28] Sales of Zecuity have been stopped following reports of skin burns and irritation.[29]

Glaxo patents for sumatriptan expired in February 2009. At that time, Imitrex sold for about $25 a pill.[30] On 6 November 2008, Par Pharmaceutical announced that it would begin shipping generic versions of sumatriptan injection (sumatriptan succinate injection) 4- and 6-mg starter kits and 4- and 6-mg filled syringe cartridges to the trade immediately. In addition, Par anticipates launching the 6-mg vials early in 2009.[31]

Mylan Laboratories Inc., Ranbaxy Laboratories, Sandoz (a subsidiary of Novartis), Dr. Reddy's Laboratories, and other companies have received FDA approval for generic versions of sumatriptan tablets in 25-, 50-, and 100-mg doses since 2009. The drug is generically available in U.S. and European markets, since Glaxo's patent protections have expired in those jurisdictions. Nasal spray sumatriptan is also generically available.[32]

In Russia versions of sumatriptan, which are not registered in the National registry of medications, may be regarded as narcotic drugs (derivatives of dimethyltriptamine).[33]