From WikiProjectMed
Jump to navigation Jump to search
Not to be confused with Digitoxin.

Digoxin, sold under the brand name Lanoxin among others, is a medication used to treat various heart conditions.[4] Most frequently it is used for atrial fibrillation, atrial flutter, and heart failure.[4] Digoxin is taken by mouth or by injection into a vein.[4]

Common side effects include breast enlargement with other side effects generally due to an excessive dose.[4][6] These side effects may include loss of appetite, nausea, trouble seeing, confusion, and an irregular heartbeat.[6] Greater care is required in older people and those with poor kidney function.[6] It is unclear whether use during pregnancy is safe.[7] Digoxin is in the cardiac glycoside family of medications.[4]

Digoxin was first isolated in 1930 from the foxglove plant, Digitalis lanata.[8][9] It is on the World Health Organization's List of Essential Medicines.[10] It is generally inexpensive.[11] The wholesale cost in the developing world is about US$0.20 to $6.60 a month.[12] In the United States it generally costs less than $25 per month, as of 2015.[13] In 2017, it was the 168th most commonly prescribed medication in the United States, with more than three million prescriptions.[14][15]

The most common indications for digoxin are atrial fibrillation and atrial flutter with rapid ventricular response,[16][17] though beta blockers or calcium channel blockers are often preferred.[citation needed]

One 2015 review found that digoxin increases the risk of death,[18] while another reported no change in mortality.[19] It has been suggested that the effect on mortality seen in some studies was due to inappropriately high doses of digoxin and that the low doses often used in practice (levels <0.9 ng/ml) may not increase mortality.[20]

Digoxin is no longer the first choice for heart failure; it has fallen out of favor in people with heart failure because it may increase the risk of death.[18] Currently, the recommendation for heart failure is a triple therapy of ACE inhibitor, beta blocker and mineralocorticoid antagonists. Digoxin is a third-line therapy.[21]

Digoxin is also used intrafetally or amniotically during abortions in the late second trimester and third trimester of pregnancy. It typically causes fetal demise (measured by cessation of cardiac activity) within hours of administration.[22]

The defined daily dose of digoxin is 0.25 mg either by mouth or by injection.[5] Though typical doses by mouth are often 0.125 to 0.25 mg once per day.[4] An initial dose of 0.5 to 1 mg may be given by injection over two hours as a loading dose.[23] Half the typical dose should be used in older people and those with kidney problems.[3]

The occurrence of adverse drug reactions is common, owing to its narrow therapeutic index (the margin between effectiveness and toxicity). Gynaecomastia (enlargement of breast tissue) is mentioned in many textbooks as a side effect, thought to be due to the estrogen-like steroid moiety of the digoxin molecule,[24] but when systematically sought, the evidence for this is equivocal as of 2005[update].[25] The combination of increased (atrial) arrhythmogenesis and inhibited atrioventricular (AV) conduction (for example paroxysmal atrial tachycardia with AV block – so-called "PAT with block") is said to be pathognomonic (that is, diagnostic) of digoxin toxicity.[26] 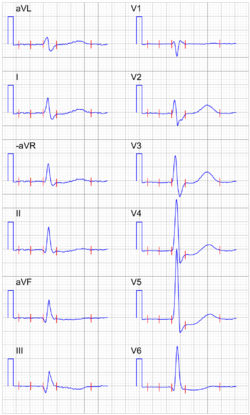 Digoxin's primary mechanism of action involves inhibition of the sodium potassium adenosine triphosphatase (Na+/K+ ATPase), mainly in the myocardium. This inhibition causes an increase in intracellular sodium levels, resulting in decreased activity of the sodium-calcium exchanger, which normally imports three extracellular sodium ions into the cell and transports one intracellular calcium ion out of the cell. The reversal of this exchanger causes an increase in the intracellular calcium concentration that is available to the contractile proteins. Increased intracellular calcium lengthens phase 4 and phase 0 of the cardiac action potential, which leads to a decrease in heart rate.[28] Increased amounts of Ca2+ also leads to increased storage of calcium in the sarcoplasmic reticulum, causing a corresponding increase in the release of calcium during each action potential. This leads to increased contractility (the force of contraction) of the heart without increasing heart energy expenditure.[citation needed]

The inhibition of the sodium pump may also improve baroreceptor sensitivity in heart failure and may explain some of the neurohormonal effects of digoxin.[29]

Digoxin also has important parasympathetic effects, particularly on the atrioventricular node.[30] While it does increase the magnitude of myocardial contractility, the duration of the contraction is only slightly increased. Its use as an antiarrhythmic drug, then, comes from its direct and indirect parasympathetic stimulating properties. Vagus nerve stimulation slows down conduction at the AV node by increasing the refractory period of cardiac myocytes. The slowed AV node gives the ventricles more time to fill before contracting. This negative chronotropic effect is synergistic with the direct effect on cardiac pacemaker cells. The arrhythmia itself is not affected, but the pumping function of the heart improves, owing to improved filling.

Overall, the heart rate is decreased while stroke volume is increased, resulting in a net increase in blood pressure, leading to increased tissue perfusion. This causes the myocardium to work more efficiently, with optimized hemodynamics and an improved ventricular function curve.

Other electrical effects include a brief initial increase in action potential, followed by a decrease as the K+ conductance increases due to increased intracellular amounts of Ca2+ ions. The refractory period of the atria and ventricles is decreased, while it increases in the sinoatrial and AV nodes. A less negative resting membrane potential is made, leading to increased irritability.

ECG changes seen in people taking digoxin include increased PR interval (due to decreased AV conduction) and a shortened QT interval. Also, the T wave may be inverted and accompanied by ST depression. It may cause AV junctional rhythm and ectopic beats (bigeminy) resulting in ventricular tachycardia and fibrillation.

Digoxin is usually given orally, but can also be given by IV injection in urgent situations (the IV injection should be slow, and heart rhythm should be monitored). While IV therapy may be better tolerated (less nausea), digoxin has a very long distribution half-life into the cardiac tissue, which will delay its onset of action by a number of hours. The half-life is about 36 hours for patients with normal renal function, digoxin is given once daily, usually in 125 μg or 250 μg doses.[citation needed]

Digoxin elimination is mainly by renal excretion and involves P-glycoprotein, which leads to significant clinical interactions with P-glycoprotein inhibitor drugs. Examples commonly used in patients with heart problems include spironolactone, verapamil and amiodarone. In patients with decreased kidney function the half-life is considerably longer, along with decrease in Vd (volume of distribution), calling for a reduction in dose or a switch to a different glycoside, such as digitoxin (not available in the United States), which has a much longer elimination half-life of around seven days and is eliminated by the liver.[citation needed]

Effective plasma levels vary depending on the medical indication. For congestive heart failure, levels between 0.5 and 1.0 ng/ml are recommended.[31] This recommendation is based on post hoc analysis of prospective trials, suggesting higher levels may be associated with increased mortality rates. For heart rate control (atrial fibrillation), plasma levels are less defined and are generally titrated to a goal heart rate. Typically, digoxin levels are considered therapeutic for heart rate control between 0.5 and 2.0 ng/ml (or 0.6 and 2.6 nmol/l).[32] In suspected toxicity or ineffectiveness, digoxin levels should be monitored. Plasma potassium levels also need to be closely controlled (see side effects, below).

A study which looked to see if digoxin affected men and women differently found that digoxin did not reduce deaths overall, but did result in less hospitalization. Women who took digoxin died "more frequently" (33%) than women who took placebo (29%). Digoxin increased the risk of death in women by 23%. There was no difference in the death rate for men in the study.[33]

Digoxin is also used as a standard control substance to test for P-glycoprotein inhibition.[citation needed]

Derivatives of plants of genus Digitalis have a long history of medical use. The English physician William Withering is credited with the first published description of the use of Digitalis derivatives in his 1785 book An Account of the Foxglove and some of its Medical Uses With Practical Remarks on Dropsy and Other Diseases.[34] It effects were first explained by Arthur Robertson Cushny. The name is derived from that of digitoxin,[1] which explains its pronunciation.

Charles Cullen admitted in 2003 to killing as many as 40 hospital patients with overdoses of heart medication—usually digoxin—at hospitals in New Jersey and Pennsylvania over his 19-year career as a nurse. On March 10, 2006, he was sentenced to 18 consecutive life sentences and is not eligible for parole.[35]

On April 25, 2008, the U.S. Federal Drug Administration (FDA) issued a press release[36] alerting the public to a Class I recall of Digitek, a brand of digoxin produced by Mylan.[37] Some tablets had been released at double thickness and therefore double strength, causing some patients to experience digoxin toxicity. A class-action lawsuit against the Icelandic generic drug maker Actavis was announced two weeks later.[38]

On March 31, 2009, the FDA announced another generic digoxin pill recall by posting this company press release on the agency's web site: "Caraco Pharmaceutical Laboratories, Ltd. Announces a Nationwide Voluntary Recall of All Lots of Digoxin Tablets Due to Size Variability". A March 31 press release from Caraco, a generic pharmaceutical company, stated:

[All] tablets of Caraco brand Digoxin, USP, 0.125 mg, and Digoxin, USP, 0.25 mg, distributed prior to March 31, 2009, which are not expired and are within the expiration date of September, 2011, are being voluntarily recalled to the consumer level. The tablets are being recalled because they may differ in size and therefore could have more or less of the active ingredient, digoxin.[citation needed]

A 2008 study suggested digoxin has beneficial effects not only for the heart, but also in reducing the risk of certain kinds of cancer.[39] However, comments on this study suggested that digoxin is not effective at reducing cancer risk at therapeutic concentrations of the drug,[40] so the results need further investigation.[41]

In the Turkish film Once Upon a Time in Anatolia the prosecutor tells the doctor a story of a woman who died on the date she predicted she would die, well after delivering the baby. The doctor speculates that she may have taken high doses of digoxin to die of heart attack. There are hints that she may have been the prosecutor's wife who committed suicide because she could not take his one-time affair.