Depression is a state of sadness and loss of interest in activities.[1][2] It can affect a person's thoughts, behavior, feelings, sleep, appetite, and sense of well-being.[1][2] Symptoms such as pain and digestive problems without a clear underlying cause may occur.[1] Complications may include suicide.[1]

The cause is believed to involve both genetic and environmental factors.[2] A family history of the condition increases the risk about 3 fold.[2] It occurs as part of a number of mental disorders including major depression, persistent depressive disorder, seasonal affective disorder, post partum depression, and premenstrual dysphoric disorder.[1][3] It may also occur as a side effect of medication, from substance misuse, or as a result of a medical condition such as cancer, stroke, or chronic pain.[2][3] Episodes may be triggered by the death of a loved one, financial problems, or relationship issues.[2]

Diagnosis is based on symptoms and examination.[2] By definition symptoms must be present every day, nearly all day, for at least two weeks.[1] Blood tests and medical imaging may be done to rule out an underlying medical cause.[2] Conditions that may present similarly include sadness.[4]

Treatment may involve counselling and medication.[2] Hospitalization may be required in those at risk of suicide.[2] Electroconvulsive therapy may be done in those who do not respond to other measures.[2] Relapses are common after treatment.[2] Depression is common.[1] In a given year about 7% of people experience major depression.[2] Young adults are more commonly affected as are females.[2]

Symptoms of depression include a state of sadness and loss of interest in activities.[1][2] It can affect a person's thoughts, behavior, feelings, sleep, appetite, and sense of well-being.[1][2] Symptoms such as pain and digestive problems without a clear underlying cause may occur.[1] Complications may include suicide.[1]

Allegory on melancholy, from circa 1729–40, etching and engraving, dimensions of the sheet: 42 × 25.7 cm, in the Metropolitan Museum of Art (New York City)

Adversity in childhood, such as bereavement, neglect, mental abuse, physical abuse, sexual abuse, or unequal parental treatment of siblings can contribute to depression in adulthood.[5][6] Childhood physical or sexual abuse in particular significantly correlates with the likelihood of experiencing depression over the victim's lifetime.[7]

Changes in personality or in one's social environment can affect levels of depression. High scores on the personality domain neuroticism make the development of depressive symptoms as well as all kinds of depression diagnoses more likely,[14] and depression is associated with low extraversion.[15] Other personality indicators could be: temporary but rapid mood changes, short term hopelessness, loss of interest in activities that used to be of a part of one's life, sleep disruption, withdrawal from previous social life, appetite changes, and difficulty concentrating.[16]

Depression may also be the result of healthcare, such as with medication induced depression. Therapies associated with depression include interferon therapy, beta-blockers, isotretinoin, contraceptives,[24] cardiac agents, anticonvulsants, antimigraine drugs, antipsychotics, and hormonal agents such as gonadotropin-releasing hormone agonist.[25]

Several drugs of abuse can cause or exacerbate depression, whether in intoxication, withdrawal, and from chronic use. These include alcohol, sedatives (including prescription benzodiazepines), opioids (including prescription pain killers and illicit drugs such as heroin), stimulants (such as cocaine and amphetamines), hallucinogens, and inhalants.[26]

Researchers have begun to conceptualize ways in which the historical legacies of racism and colonialism may create depressive conditions.[27][28]

Measures of depression as an emotional disorder include, but are not limited to: Beck Depression Inventory-11 and the 9-item depression scale in the Patient Health Questionnaire. Both of these measures are psychological tests that ask personal questions of the participant, and have mostly been used to measure the severity of depression. The Beck Depression Inventory (BDI) is a self-report scale that helps a therapist identify the patterns of depression symptoms and monitor recovery. The responses on this scale can be discussed in therapy to devise interventions for the most distressing symptoms of depression.[29] Several studies, however, have used these measures to also determine healthy individuals who are not suffering from depression as a mental disorder, but as an occasional mood disorder. This is substantiated by the fact that depression as an emotional disorder displays similar symptoms to minimal depression and low levels of mental disorders such as major depressive disorder; therefore, researchers were able to use the same measure interchangeably. In terms of the scale, participants scoring between 0-13 and 0-4 respectively were considered healthy individuals.[30]

Another measure of depressed mood would be the IWP Multi-affect Indicator.[31] It is a psychological test that indicates various emotions, such as enthusiasm and depression, and asks for the degree of the emotions that the participants have felt in the past week. There are studies that have used lesser items from the IWP Multi-affect Indicator which was then scaled down to daily levels to measure the daily levels of depression as an emotional disorder.[32]

Alcohol can be a depressant which slows down some regions of the brain, like the prefrontal and temporal cortex, negatively affecting rationality and memory.[33] It also lowers the level of serotonin in the brain, which could potentially lead to higher chances of depressive mood.[34]

The connection between the amount of alcohol intake, level of depressed mood, and how it affects the risks of experiencing consequences from alcoholism, were studied in a research done on college students. The study used 4 latent, distinct profiles of different alcohol intake and level of depression; Mild or Moderate Depression, and Heavy or Severe Drinkers. Other indicators consisting of social factors and individual behaviors were also taken into consideration in the research. Results showed that the level of depression as an emotion negatively affected the amount of risky behavior and consequence from drinking, while having an inverse relationship with protective behavioral strategies, which are behavioral actions taken by oneself for protection from the relative harm of alcohol intake. Having an elevated level of depressed mood does therefore lead to greater consequences from drinking.[35]

Social abuse, such as bullying, are defined as actions of singling out and causing harm on vulnerable individuals. In order to capture a day-to-day observation of the relationship between the damaging effects of social abuse, the victim's mental health and depressive mood, a study was conducted on whether individuals would have a higher level of depressed mood when exposed to daily acts of negative behavior. The result concluded that being exposed daily to abusive behaviors such as bullying has a positive relationship to depressed mood on the same day.

Divergent thinking is defined as a thought process that generates creativity in ideas by exploring many possible solutions. Having a depressed mood will significantly reduce the possibility of divergent thinking, as it reduces the fluency, variety and the extent of originality of the possible ideas generated.[36]

However, some depressive mood disorders might have a positive effect for creativity. Upon identifying several studies and analyzing data involving individuals with high levels of creativity, Christa Taylor was able to conclude that there is a clear positive relationship between creativity and depressive mood. A possible reason is that having a low mood could lead to new ways of perceiving and learning from the world, but it is unable to account for certain depressive disorders. The direct relationship between creativity and depression remains unclear, but the research conducted on this correlation has shed light that individuals who are struggling with a depressive disorder may be having even higher levels of creativity than a control group, and would be a close topic to monitor depending on the future trends of how creativity will be perceived and demanded.[37]

There is a connection between the type of stress management techniques and the level of daily depressive mood.[36]

Problem-focused coping leads to lower level of depression. Focusing on the problem allows for the subjects to view the situation in an objective way, evaluating the severity of the threat in an unbiased way, thus it lowers the probability of having depressive responses. On the other hand, emotion-focused coping promotes a depressed mood in stressful situations. The person has been contaminated with too much irrelevant information and loses focus on the options for resolving the problem. They fail to consider the potential consequences and choose the option that minimizes stress and maximizes well-being.

Depressed mood may not require professional treatment, and may be a normal temporary reaction to life events, a symptom of some medical condition, or a side effect of some drugs or medical treatments. A prolonged depressed mood, especially in combination with other symptoms, may lead to a diagnosis of a psychiatric or medical condition which may benefit from treatment. The UK National Institute for Health and Care Excellence (NICE) 2009 guidelines indicate that antidepressants should not be routinely used for the initial treatment of mild depression, because the risk-benefit ratio is poor.[38] Physical activity can have a protective effect against the emergence of depression.[39]

Physical activity can also decrease depressive symptoms due to the release of neurotrophic proteins in the brain that can help to rebuild the hippocampus that may be reduced due to depression.[40] Also yoga could be considered an ancillary treatment option for patients with depressive disorders and individuals with elevated levels of depression.[41][42]

Reminiscence of old and fond memories is another alternative form of treatment, especially for the elderly who have lived longer and have more experiences in life. It is a method that causes a person to recollect memories of their own life, leading to a process of self-recognition and identifying familiar stimuli. By maintaining one's personal past and identity, it is a technique that stimulates people to view their lives in a more objective and balanced way, causing them to pay attention to positive information in their life stories, which would successfully reduce depressive mood levels.[43]

Depression is the leading cause of disability worldwide, the United Nations (UN) health agency reported, estimating that it affects more than 300 million people worldwide – the majority of them women, young people and the elderly. An estimated 4.4 percent of the global population suffers from depression, according to a report released by the UN World Health Organization (WHO), which shows an 18 percent increase in the number of people living with depression between 2005 and 2015.[45][46][47] 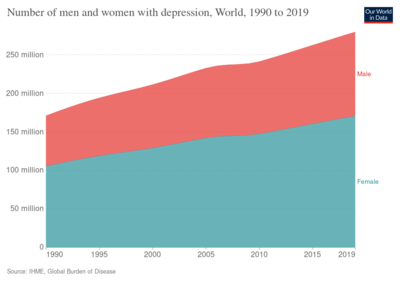 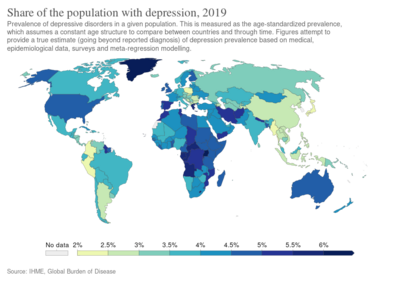 Depression is a major mental-health cause of disease burden. Its consequences further lead to significant burden in public health, including a higher risk of dementia, premature mortality arising from physical disorders, and maternal depression impacts on child growth and development.[48] Approximately 76% to 85% of depressed people in low- and middle-income countries do not receive treatment;[49] barriers to treatment include: inaccurate assessment, lack of trained health-care providers, social stigma and lack of resources.[50]

The World Health Organization has constructed guidelines - known as The Mental Health Gap Action Programme (mhGAP) - aiming to increase services for people with mental, neurological and substance-use disorders.[50] Depression is listed as one of conditions prioritized by the programme. Trials conducted show possibilities for the implementation of the programme in low-resource primary-care settings dependent on primary-care practitioners and lay health-workers.[51] Examples of mhGAP-endorsed therapies targeting depression include Group Interpersonal Therapy as group treatment for depression and "Thinking Health", which utilizes cognitive behavioral therapy to tackle perinatal depression.[50] Furthermore, effective screening in primary care is crucial for the access of treatments. The mhGAP programme adopted its approach of improving detection rates of depression by training general practitioners. However, there is still weak evidence supporting this training.[48]

The Greco-Roman world used the tradition of the four humours to attempt to systematise sadness as "melancholia". The well-established idea of melancholy fell out of scientific favour in the 19th century.[52] Emil Kraepelin tried to give a scientific account of depression (German: das manisch-depressive Irresein) in 1896.[53]