From WikiProjectMed
Jump to navigation Jump to search
MedicationTemplate:SHORTDESC:Medication
Not to be confused with Guanine, Guanosine, Guanidine, Guaifenesin, or Clonidine.

Common side effects include sleepiness, constipation, dry mouth, sexual problems, and headaches.[6] Other side effect may include anxiety, low blood pressure, depression, and urinary problems.[7] Use is not recommended during pregnancy or breastfeeding.[7] It appears to work by activating the α2A receptors in the brain thereby decreasing sympathetic nervous system activity.[6] 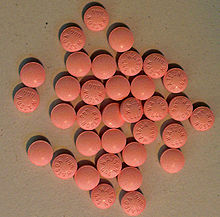 Side effects of guanfacine are dose-dependent.[13]

Typical side effects such as fatigue, irritability and stomach upset can take a week or two to subside. Increases in dosage can have the same adjustment period.

Guanfacine is known to lower the user's tolerance for alcohol, heightening its effect. Additionally, alcohol may prolong the effects of the medication.[15]

Guanfacine is a highly selective agonist of the α2A adrenergic receptor, with low affinity for other receptors.[16] However, it may also be a potent 5-HT2B receptor agonist, potentially contributing to valvulopathy.[17]

Guanfacine works by activating α2A adrenoceptors in the central nervous system. This results in reduced peripheral sympathetic outflow and thus a reduction in peripheral sympathetic tone, which lowers both systolic and diastolic blood pressure.[18] In ADHD, guanfacine works by strengthening regulation of attention and behavior by the prefrontal cortex.[19] These enhancing effects on prefrontal cortical functions are thought to be due to drug stimulation of post-synaptic α2A adrenoceptors on dendritic spines, which inhibit cAMP-mediated opening of HCN and KCNQ channels and thus strengthen prefrontal cortical synaptic connectivity and enhance neuronal firing.[19][20] The use of guanfacine for treating prefrontal disorders was developed by the Arnsten lab at Yale University based on understanding the needs of the prefrontal cortex.[19][21]

Guanfacine has an oral bioavailability of 80%. There is no clear evidence of any first-pass metabolism. Elimination half-life is 17 hours with the major elimination route being renal. The principal metabolite is the 3-hydroxy-derivative, with evidence of moderate biotransformation, and the key intermediate being an epoxide.[22] It is also shown that elimination in patients with impaired renal function does not differ significantly from those with normal renal function. As such, metabolism by liver is the assumption for those with impaired renal function, as supported by increased frequency of known side effects of orthostatic hypotension and sedation.[23]

Guanfacine has been studied as a treatment for posttraumatic stress disorder (PTSD). Evidence of efficacy in adults is limited, but one study found positive results in children with comorbid ADHD.[26] It may be also useful in adult PTSD patients who do not respond to SSRIs.[27]

Results of studies using guanfacine to treat Tourette's have been mixed.[28]

Guanfacine has been investigated for treatment of withdrawal for opioids, ethanol, and nicotine.[29] Guanfacine has been shown to help reduce stress-induced craving of nicotine in smokers trying to quit, which may involve strengthening of prefrontal cortical self-control.[30]