Donepezil, sold as the trade name Aricept among others, is a medication used to treat Alzheimer's disease.[5] It appears to result in a small benefit in mental function and ability to function.[6] Use, however, has not been shown to change the progression of the disease.[7] Treatment should be stopped if no benefit is seen.[8] It is taken by mouth.[5]

Common side effects include nausea, trouble sleeping, aggression, diarrhea, feeling tired, and muscle cramps.[5][8] Serious side effects may include abnormal heart rhythms, difficulty emptying urine from the bladder, and seizures.[5] Donepezil is a centrally acting reversible acetylcholinesterase inhibitor and structurally unrelated to other anticholinesterase agents.[5][1]

There is no evidence that donepezil or other similar agents alters the course or progression of Alzheimer's disease. Six-to-twelve-month controlled studies have shown modest benefits in cognition or behavior.[13][14] The UK National Institute for Clinical Excellence (NICE) recommends donepezil as an option in the management of mild to moderate Alzheimer's disease.[15] The person should, however, be reviewed frequently and if there is no significant benefit it should be stopped.[15] In 2006 the U.S. Food and Drug Administration also approved donepezil for treatment of mild, moderate and severe dementia in Alzheimer's disease.[16]

The most common side effects leading to discontinuation are nausea, diarrhea, and vomiting.[17][18] Other side effects included difficulty sleeping, muscle cramps and loss of appetite. Most side effects were observed in patients taking the 23 mg dose compared to 10 mg or lower doses. Side effects are mild and transient in most patients, lasting up to three weeks and usually improved even with continued use.[19][1]

Donepezil, like other cholinesterase inhibitors, can cause nightmares due to enhanced activation of the visual association cortex during REM sleep.[1] Dosing donepezil in the morning can reduce the frequency of nightmares.[1]

People with peptic ulcer disease or taking NSAIDS should use with caution because increased risk of gastrointestinal bleeding was noted.[19] Slow heart beat and fainting in people with heart problems were also seen. These symptoms may appear more frequent when initiating treatment or increasing the donepezil dose. Although occurrence of seizures is rare, people who have a predisposition to seizures should be treated with caution.[19]

If daily donepezil has suspended for 7 days or less, restarting at the same dose is recommended, while if the suspension lasts longer than 7 days, retitrate from 5 mg daily is suggested.[20][21]

The precise mechanism of action of donepezil in patients with Alzheimer's disease is not fully understood. Certainly, Alzheimer's disease involves a substantial loss of the elements of the cholinergic system and it is generally accepted that the symptoms of Alzheimer's disease are related to this cholinergic deficit, particularly in the cerebral cortex and other areas of the brain.[22][23] It is noted that the hippocampal formation plays an important role in the processes of control of attention, memory and learning. Just the severity of the loss of cholinergic neurons of the central nervous system (CNS) has been found to correlate with the severity of cognitive impairment.

In addition to its actions as an acetylcholinesterase inhibitor, donepezil has been found to act as a potent agonist of the σ1 receptor (Ki = 14.6 nM), and has been shown to produce specific antiamnestic effects in animals mainly via this action.[24]

Some noncholinergic mechanisms have also been proposed.[1] Donepezil upregulates the nicotinic receptors in the cortical neurons, adding to neuroprotective property.[1] It inhibits voltage-activated sodium currents reversibly and delays rectifier potassium currents and fast transient potassium currents, although this action is unlikely to contribute to clinical effects.[1] 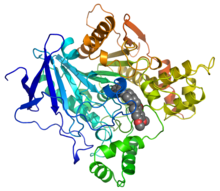 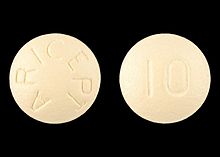 Research leading to the development of donepezil began in 1983 at Eisai, and in 1996, Eisai received approval from the United States Food and Drug Administration (USFDA) for donepezil under the brand Aricept, which it co-marketed with Pfizer.[27] The team at Eisai was led by Hachiro Sugimoto.[28]

As of 2011, Aricept was the world's best-selling Alzheimer's disease treatment.[29] The first generic donepezil became available in November 2010 with the USFDA approval of a formulation prepared by Ranbaxy Labs.[30] In April 2011 a second generic formulation, from Wockhardt, received tentative USFDA marketing approval.[31]

The addition of donepezil with existing ADHD medications has shown mixed results.[39] In those with Tourette syndrome and ADHD, donepezil may reduce tics while it had no effect on ADHD's symptoms.[39]