Adenosine is a chemical found in mammals which is also used as a medication.[3][4] As a medication it is used to treat or diagnosis certain forms of supraventricular tachycardia that do not improve with vagal maneuvers.[1] It is generally used by rapid injection into a vein.[1] Onset of action is within 40 seconds and effects last for less than 2 minutes.[2]

Common side effects include chest pain, feeling faint, shortness of breath, and tingling of the skin.[1] Serious side effects include a worsening dysrhythmia and low blood pressure.[1] While it may be used during pregnancy, safety is not entirely clear.[5] Adenosine is one of four nucleoside building blocks to RNA.[3] It works by decreasing the frequency by which electrical signals can go through the AV node of the heart.[1]

Adenosine was approved for medical use in the United States in 1989.[1] It; however, has been studied within living systems since the 1920s.[3] Adenosine is avaliable as a generic medication.[6] It is not expensive.[7] In the United Kingdom in 2020 a 6 mg dose costs the NHS about a pound.[6]

Fast rhythms of the heart that are confined to the atria (e.g., atrial fibrillation, atrial flutter) or ventricles (e.g., monomorphic ventricular tachycardia) and do not involve the AV node as part of the re-entrant circuit are not typically converted by adenosine. However, the ventricular response rate is temporarily slowed with adenosine in such cases.

Because of the effects of adenosine on AV node-dependent SVTs, adenosine is considered a class V antiarrhythmic agent. When adenosine is used to cardiovert an abnormal rhythm, it is normal for the heart to enter ventricular asystole for a few seconds. This can be disconcerting to a normally conscious people, and is associated with angina-like sensations in the chest.[9]

When given for the evaluation or treatment of a supraventricular tachycardia (SVT), the initial dose is 6 mg which may be followed by a dose of 12 mg.[1] In children it is used at a dose of 0.3 mg/kg.[1] In those who have had a heart transplant half the typical dose is used.[6]

It is given as a rapid injection into a vein. Due to adenosine's extremely short half-life, the IV line is started as proximal (near) to the heart as possible, such as the antecubital fossa. The IV push is often followed with a flush of 10–20 mL of normal saline. If this has no effect (i.e., no evidence of transient AV block), a dose of 12 mg can be given 1–2 minutes after the first dose. When given to dilate the arteries, such as in a "stress test", the dosage is typically 0.14 mg/kg/min, administered for 4 or 6 minutes, depending on the protocol.

The recommended dose may be increased in people on theophylline, since methylxanthines prevent binding of adenosine at receptor sites. The dose is often decreased in people on dipyridamole and diazepam because adenosine potentiates the effects of these drugs. The recommended dose is also reduced by half in people presenting congestive heart failure, myocardial infarction, shock, hypoxia, and/or chronic liver disease or chronic kidney disease, and in the elderly.

While it may be used during pregnancy, safety is not entirely clear.[5] Large doses may result in harm to the baby.[6] While it is not known if adenosine enters breastmilk, this is believed to be unlikely as it is so rapidly broken down.[6]

Common contraindications for adenosine include 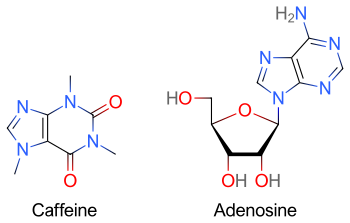 Caffeine's principal mode of action is as an antagonist of adenosine receptors in the brain.

Dipyridamole potentiates the action of adenosine, requiring the use of lower doses.

Adenosine consists of an adenine attached to a ribose via a β-N9-glycosidic bond.

Adenosine is an endogenous purine nucleoside that modulates many physiological processes. Cellular signaling by adenosine occurs through four known adenosine receptor subtypes (A1, A2A, A2B, and A3).[14]

Extracellular adenosine concentrations from normal cells are approximately 300 nM; however, in response to cellular damage (e.g., in inflammatory or ischemic tissue), these concentrations are quickly elevated (600–1,200 nM). Thus, in regard to stress or injury, the function of adenosine is primarily that of cytoprotection preventing tissue damage during instances of hypoxia, ischemia, and seizure activity. Activation of A2A receptors produces a constellation of responses that in general can be classified as anti-inflammatory.[15] Enzymatic production of adenosine can be anti-inflammatory or immunosuppressive.[16][17][18][19]

When it is administered intravenously, adenosine causes transient heart block in the atrioventricular (AV) node. This is mediated via the A1 receptor, inhibiting adenylyl cyclase, reducing cAMP and so causing cell hyperpolarization by increasing K+ efflux via inward rectifier K+ channels, subsequently inhibiting Ca2+ current.[20] It also causes endothelial-dependent relaxation of smooth muscle as is found inside the artery walls. This causes dilation of the "normal" segments of arteries, i.e. where the endothelium is not separated from the tunica media by atherosclerotic plaque. This feature allows physicians to use adenosine to test for blockages in the coronary arteries, by exaggerating the difference between the normal and abnormal segments.

Adenosine is an endogenous agonist of the ghrelin/growth hormone secretagogue receptor.[22] However, while it is able to increase appetite, unlike other agonists of this receptor, adenosine is unable to induce the secretion of growth hormone and increase its plasma levels.[22]

Adenosine used as a second messenger can be the result of de novo purine biosynthesis via adenosine monophosphate (AMP), though it is possible other pathways exist.[23]

When adenosine enters the circulation, it is broken down by adenosine deaminase, which is present in red blood cells and the vessel wall.

Dipyridamole, an inhibitor of adenosine nucleoside transporter, allows adenosine to accumulate in the blood stream. This causes an increase in coronary vasodilatation.

Adenosine deaminase deficiency is a known cause of immunodeficiency.

Its derivatives include the energy carriers adenosine mono-, di-, and triphosphate. Cyclic adenosine monophosphate (cAMP) is pervasive in signal transduction. Adenosyl (Ad) is the radical formed by removal of the 5'-hydroxy (OH) group. Ad is found in vitamin B12 and the radical SAM enzymes.[24]

The adenosine analog NITD008 has been reported to directly inhibit the recombinant RNA-dependent RNA polymerase of the dengue virus by terminating its RNA chain synthesis. This interaction suppresses peak viremia and rise in cytokines and prevents lethality in infected animals, raising the possibility of a new treatment for this flavivirus.[25] The 7-deaza-adenosine analog has been shown to inhibit the replication of the hepatitis C virus.[26] BCX4430 is protective against Ebola and Marburg viruses.[27] Such adenosine analogs are potentially clinically useful since they can be taken orally.

Adenosine is believed to be an anti-inflammatory agent at the A2A receptor.[28][29] Topical treatment of adenosine to foot wounds in diabetes mellitus has been shown in lab animals to drastically increase tissue repair and reconstruction. Topical administration of adenosine for use in wound-healing deficiencies and diabetes mellitus in humans is currently under clinical investigation.

Methotrexate's anti-inflammatory effect may be due to its stimulation of adenosine release.[30]

In general, adenosine has an inhibitory effect in the central nervous system (CNS). Caffeine's stimulatory effects are credited primarily (although not entirely) to its capacity to block adenosine receptors, thereby reducing the inhibitory tonus of adenosine in the CNS. This reduction in adenosine activity leads to increased activity of the neurotransmitters dopamine and glutamate.[31] Experimental evidence suggests that adenosine and adenosine agonists can activate Trk receptor phosphorylation through a mechanism that requires the adenosine A2A receptor.[32]

Adenosine has been shown to promote thickening of hair on people with thinning hair.[33][34] A 2013 study compared topical adenosine with minoxidil in male androgenetic alopecia, finding it was not superior to minoxidil and further trials were needed.[35]

The principal component of marijuana, delta-9-tetrahydrocannabinol (THC) and the endocannabinoid anandamide (AEA) induce sleep in rats by increasing adenosine levels in the basal forebrain. They also significantly increase slow-wave sleep during the third hour, mediated by CB1 receptor activation. These findings identify a potential therapeutic use of cannabinoids to induce sleep in conditions where sleep may be severely attenuated.[36]

Adenosine infusion, can increase perfusional defect, as a result per an animal study indicates that "a better correlation between the echocardiographic measurements and the necrotic area determined by tissue staining". [37]