Dextroamphetamine (D-AMP)[note 1] is a medication used to treat attention deficit hyperactivity disorder (ADHD) and narcolepsy.[17][18] It is also used as an athletic performance and cognitive enhancer, and recreationally as an aphrodisiac and euphoriant. Dextroamphetamine was also used in the past by some countries' military forces to fight fatigue during extended combat operations. 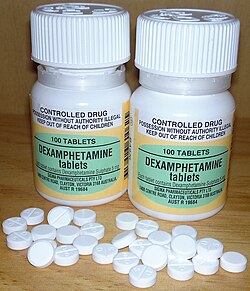 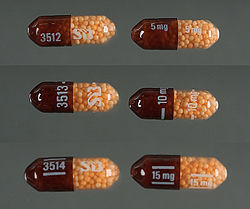 Dextroamphetamine is used to treat attention deficit hyperactivity disorder (ADHD) and narcolepsy (a sleep disorder), and is sometimes prescribed off-label for its past medical indications, such as depression and obesity.[17][18]

Many types of substances are known to interact with amphetamine, resulting in altered drug action or metabolism of amphetamine, the interacting substance, or both.[8][23] Inhibitors of the enzymes that metabolize amphetamine (e.g., CYP2D6 and FMO3) will prolong its elimination half-life, meaning that its effects will last longer.[13][23] Amphetamine also interacts with MAOIs, particularly monoamine oxidase A inhibitors, since both MAOIs and amphetamine increase plasma catecholamines (i.e., norepinephrine and dopamine);[23] therefore, concurrent use of both is dangerous.[23] Amphetamine modulates the activity of most psychoactive drugs. In particular, amphetamine may decrease the effects of sedatives and depressants and increase the effects of stimulants and antidepressants.[23] Amphetamine may also decrease the effects of antihypertensives and antipsychotics due to its effects on blood pressure and dopamine respectively.[23] Zinc supplementation may reduce the minimum effective dose of amphetamine when it is used for the treatment of ADHD.[note 3][27]

Dextroamphetamine, like other amphetamines, elicits its stimulating effects via several distinct actions: it inhibits or reverses the transporter proteins for the monoamine neurotransmitters (namely the serotonin, norepinephrine and dopamine transporters) either via trace amine-associated receptor 1 (TAAR1) or in a TAAR1 independent fashion when there are high cytosolic concentrations of the monoamine neurotransmitters[28] and it releases these neurotransmitters from synaptic vesicles via vesicular monoamine transporter 2.[29] It also shares many chemical and pharmacological properties with human trace amines, particularly phenethylamine and N-methylphenethylamine, the latter being an isomer of amphetamine produced within the human body.

Amphetamine and its enantiomers have been identified as potent full agonists of trace amine-associated receptor 1 (TAAR1), a GPCR, discovered in 2001, that is important for regulation of monoaminergic systems in the brain.[35][36] Activation of TAAR1 increases cAMP production via adenylyl cyclase activation and inhibits the function of the dopamine transporter, norepinephrine transporter, and serotonin transporter, as well as inducing the release of these monoamine neurotransmitters (effluxion).[28][35][37] Amphetamine enantiomers are also substrates for a specific neuronal synaptic vesicle uptake transporter called VMAT2.[29] When amphetamine is taken up by VMAT2, the vesicle releases (effluxes) dopamine, norepinephrine, and serotonin, among other monoamines, into the cytosol in exchange.[29]

Racemic amphetamine was first synthesized under the chemical name "phenylisopropylamine" in Berlin, 1887 by the Romanian chemist Lazar Edeleanu. It was not widely marketed until 1932, when the pharmaceutical company Smith, Kline & French (now known as GlaxoSmithKline) introduced it in the form of the Benzedrine inhaler for use as a bronchodilator. Notably, the amphetamine contained in the Benzedrine inhaler was the liquid free-base,[note 4] not a chloride or sulfate salt.

Three years later, in 1935, the medical community became aware of the stimulant properties of amphetamine, specifically dextroamphetamine, and in 1937 Smith, Kline, and French introduced tablets under the tradename Dexedrine.[39] In the United States, Dexedrine was approved to treat narcolepsy, attention disorders, and obesity. In Canada indications once included epilepsy and parkinsonism.[40] Dextroamphetamine was marketed in various other forms in the following decades, primarily by Smith, Kline, and French, such as several combination medications including a mixture of dextroamphetamine and amobarbital (a barbiturate) sold under the tradename Dexamyl and, in the 1950s, an extended release capsule (the "Spansule").[41] Preparations containing dextroamphetamine were also used in World War II as a treatment against fatigue.[42]

It quickly became apparent that dextroamphetamine and other amphetamines had a high potential for misuse, although they were not heavily controlled until 1970, when the Comprehensive Drug Abuse Prevention and Control Act was passed by the United States Congress. Dextroamphetamine, along with other sympathomimetics, was eventually classified as Schedule II, the most restrictive category possible for a drug with a government-sanctioned, recognized medical use.[43] Internationally, it has been available under the names AmfeDyn (Italy), Curban (US), Obetrol (Switzerland), Simpamina (Italy), Dexedrine/GSK (US & Canada), Dexedrine/UCB (United Kingdom), Dextropa (Portugal), and Stild (Spain).[44] It became popular on the mod scene in England in the early 1960s, and carried through to the Northern Soul scene in the north of England to the end of the 1970s.

In October 2010, GlaxoSmithKline sold the rights for Dexedrine Spansule to Amedra Pharmaceuticals (a subsidiary of CorePharma).[45]

The U.S. Air Force uses dextroamphetamine as one of its "go pills", given to pilots on long missions to help them remain focused and alert. Conversely, "no-go pills" are used after the mission is completed, to combat the effects of the mission and "go-pills".[46][47][48][49] The Tarnak Farm incident was linked by media reports to the use of this drug on long term fatigued pilots. The military did not accept this explanation, citing the lack of similar incidents. Newer stimulant medications or awakeness promoting agents with different side effect profiles, such as modafinil, are being investigated and sometimes issued for this reason.[47] 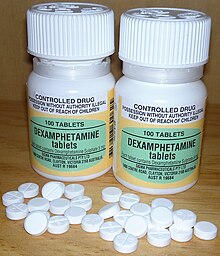 In Australia, dexamphetamine is available in bottles of 100 instant release 5 mg tablets as a generic drug.[70] or slow release dextroamphetamine preparations may be compounded by individual chemists.[71] In the United Kingdom, it is available in 5 mg instant release sulfate tablets under the generic name dexamfetamine sulfate as well as 10 mg and 20 mg strength tablets under the brand name Amfexa. It is also available in generic dexamfetamine sulfate 5 mg/ml oral sugar-free syrup.[72] The brand name Dexedrine was available in the United Kingdom prior to UCB Pharma disinvesting the product to another pharmaceutical company (Auden Mckenzie).[73]

Adderall 20 mg tablets, some broken in half, with a lengthwise-folded US dollar bill along the bottom