From WikiProjectMed
Jump to navigation Jump to search
Not to be confused with Levoamphetamine.

Lisdexamfetamine, sold under the brand name Vyvanse among others, is a medication that is used to treat attention deficit hyperactivity disorder (ADHD) in people over the age of five as well as for moderate to severe binge eating disorder in adults.[1] Lisdexamfetamine is taken by mouth.[1][7] In the United Kingdom it is usually less preferred than methylphenidate.[8] Its effects generally begin within 2 hours and last for up to 12 hours.[1]

Common side effects of lisdexamfetamine include loss of appetite, anxiety, diarrhea, trouble sleeping, irritability, and nausea.[1] Rare but serious side effects include mania, sudden cardiac death in those with underlying heart problems, and psychosis.[1] It has a high potential for abuse per the DEA.[1][7] Serotonin syndrome may occur if used with certain other medications.[1] Its use during pregnancy may result in harm to the baby and use during breastfeeding is not recommended by the manufacturer.[8][1][7] Lisdexamfetamine is a central nervous system (CNS) stimulant that works after being converted by the body into dextroamphetamine.[1][9] Chemically, lisdexamfetamine is composed of the amino acid L-lysine, attached to dextroamphetamine.[10] 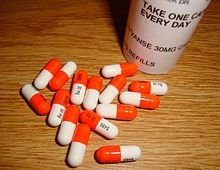 Lisdexamfetamine is used primarily as a treatment for attention deficit hyperactivity disorder (ADHD) and binge eating disorder;[15] it has similar off-label uses as those of other pharmaceutical amphetamines.[2] Individuals over the age of 65 were not commonly tested in clinical trials of lisdexamfetamine for ADHD.[15]

In 2015, a systematic review and a meta-analysis of high quality clinical trials found that, when used at low (therapeutic) doses, amphetamine produces modest yet unambiguous improvements in cognition, including working memory, long-term episodic memory, inhibitory control, and some aspects of attention, in normal healthy adults;[16][17] these cognition-enhancing effects of amphetamine are known to be partially mediated through the indirect activation of both dopamine receptor D1 and adrenoceptor α2 in the prefrontal cortex.[18][16] A systematic review from 2014 found that low doses of amphetamine also improve memory consolidation, in turn leading to improved recall of information.[19] Therapeutic doses of amphetamine also enhance cortical network efficiency, an effect which mediates improvements in working memory in all individuals.[18][20] Amphetamine and other ADHD stimulants also improve task saliency (motivation to perform a task) and increase arousal (wakefulness), in turn promoting goal-directed behavior.[18][21][22] Stimulants such as amphetamine can improve performance on difficult and boring tasks and are used by some students as a study and test-taking aid.[18][22][23] Based upon studies of self-reported illicit stimulant use, 5–35% of college students use diverted ADHD stimulants, which are primarily used for enhancement of academic performance rather than as recreational drugs.[24][25][26] However, high amphetamine doses that are above the therapeutic range can interfere with working memory and other aspects of cognitive control.[18][22]

Amphetamine is used by some athletes for its psychological and athletic performance-enhancing effects, such as increased endurance and alertness;[27][28] however, non-medical amphetamine use is prohibited at sporting events that are regulated by collegiate, national, and international anti-doping agencies.[29][30] In healthy people at oral therapeutic doses, amphetamine has been shown to increase muscle strength, acceleration, athletic performance in anaerobic conditions, and endurance (i.e., it delays the onset of fatigue), while improving reaction time.[27][31][32] Amphetamine improves endurance and reaction time primarily through reuptake inhibition and release of dopamine in the central nervous system.[31][32][33] Amphetamine and other dopaminergic drugs also increase power output at fixed levels of perceived exertion by overriding a "safety switch", allowing the core temperature limit to increase in order to access a reserve capacity that is normally off-limits.[32][34][35] At therapeutic doses, the adverse effects of amphetamine do not impede athletic performance;[27][31] however, at much higher doses, amphetamine can induce effects that severely impair performance, such as rapid muscle breakdown and elevated body temperature.[36][31]

Pharmaceutical lisdexamfetamine dimesylate is contraindicated in patients with hypersensitivity to amphetamine products or any of the formulation's inactive ingredients.[15] It is also contraindicated in patients who have used a monoamine oxidase inhibitor (MAOI) within the last 14 days.[15][37] Amphetamine products are contraindicated by the United States Food and Drug Administration (USFDA) in people with a history of drug abuse, heart disease, or severe agitation or anxiety, or in those currently experiencing arteriosclerosis, glaucoma, hyperthyroidism, or severe hypertension.[38] The USFDA advises anyone with bipolar disorder, depression, elevated blood pressure, liver or kidney problems, mania, psychosis, Raynaud's phenomenon, seizures, thyroid problems, tics, or Tourette syndrome to monitor their symptoms while taking amphetamine.[38] Amphetamine is classified in US pregnancy category C.[38] This means that detriments to the fetus have been observed in animal studies and adequate human studies have not been conducted; amphetamine may still be prescribed to pregnant women if the potential benefits outweigh the risks.[39] Amphetamine has also been shown to pass into breast milk, so the USFDA advises mothers to avoid breastfeeding when using it.[38] Due to the potential for stunted growth, the USFDA advises monitoring the height and weight of children and adolescents prescribed amphetamines.[38] Prescribing information approved by the Australian Therapeutic Goods Administration further contraindicates anorexia.[40]

Products containing lisdexamfetamine have a comparable drug safety profile to those containing amphetamine.[10]

The oral bioavailability of amphetamine varies with gastrointestinal pH;[36] it is well absorbed from the gut, and bioavailability is typically over 75% for dextroamphetamine.[52] Amphetamine is a weak base with a pKa of 9.9;[53] consequently, when the pH is basic, more of the drug is in its lipid soluble free base form, and more is absorbed through the lipid-rich cell membranes of the gut epithelium.[53][36] Conversely, an acidic pH means the drug is predominantly in a water-soluble cationic (salt) form, and less is absorbed.[53] Approximately 15–40% of amphetamine circulating in the bloodstream is bound to plasma proteins.[54] Following absorption, amphetamine readily distributes into most tissues in the body, with high concentrations occurring in cerebrospinal fluid and brain tissue.[55]

The half-lives of amphetamine enantiomers differ and vary with urine pH.[53] At normal urine pH, the half-lives of dextroamphetamine and levoamphetamine are 9–11 hours and 11–14 hours, respectively.[53] Highly acidic urine will reduce the enantiomer half-lives to 7 hours;[55] highly alkaline urine will increase the half-lives up to 34 hours.[55] The immediate-release and extended release variants of salts of both isomers reach peak plasma concentrations at 3 hours and 7 hours post-dose respectively.[53] Amphetamine is eliminated via the kidneys, with 30–40% of the drug being excreted unchanged at normal urinary pH.[53] When the urinary pH is basic, amphetamine is in its free base form, so less is excreted.[53] When urine pH is abnormal, the urinary recovery of amphetamine may range from a low of 1% to a high of 75%, depending mostly upon whether urine is too basic or acidic, respectively.[53] Following oral administration, amphetamine appears in urine within 3 hours.[55] Roughly 90% of ingested amphetamine is eliminated 3 days after the last oral dose.[55]

The prodrug lisdexamfetamine is not as sensitive to pH as amphetamine when being absorbed in the gastrointestinal tract;[15] following absorption into the blood stream, it is converted by red blood cell-associated enzymes to dextroamphetamine via hydrolysis.[15] The elimination half-life of lisdexamfetamine is generally less than 1 hour.[15]

Lisdexamfetamine is a substituted amphetamine with an amide linkage formed by the condensation of dextroamphetamine with the carboxylate group of the essential amino acid L-lysine.[10] The reaction occurs with retention of stereochemistry, so the product lisdexamfetamine exists as a single stereoisomer. There are many possible names for lisdexamfetamine based on IUPAC nomenclature, but it is usually named as N-[(2S)-1-phenyl-2-propanyl]-L-lysinamide or (2S)-2,6-diamino-N-[(1S)-1-methyl-2-phenylethyl]hexanamide.[70] The condensation reaction occurs with loss of water:

Amine functional groups are vulnerable to oxidation in air and so pharmaceuticals containing them are usually formulated as salts where this moiety has been protonated. This increases stability, water solubility, and, by converting a molecular compound to an ionic compound, increases the melting point and thereby ensures a solid product.[71] In the case of lisdexamfetamine, this is achieved by reacting with two equivalents of methanesulfonic acid to produce the dimesylate salt, a water-soluble (792 mg mL−1) powder with a white to off-white color.[15]

Comparison to other formulations

Lisdexamfetamine dimesylate is one marketed formulation delivering dextroamphetamine. The following table compares the drug to other amphetamine pharmaceuticals.

In January 2015, lisdexamfetamine was approved by the U.S. Food and Drug Administration for treatment of binge eating disorder in adults.[82]

Lisdexamfetamine is a contraction of L-lysine-dextroamphetamine.

Some clinical trials that used lisdexamfetamine as an add-on therapy with a selective serotonin reuptake inhibitor (SSRI) or serotonin-norepinephrine reuptake inhibitor (SNRI) for treatment-resistant depression indicated that this is no more effective than the use of an SSRI or SNRI alone.[85] Other studies indicated that psychostimulants potentiated antidepressants, and were under-prescribed for treatment resistant depression. In those studies, patients showed significant improvement in energy, mood, and psychomotor activity.[86] In February 2014, Shire announced that two late-stage clinical trials had shown that Vyvanse was not an effective treatment for depression.[87]