From WikiProjectMed
(Redirected from Prostacyclin)
Jump to navigation Jump to search

Epoprostenol, also known as prostacyclin, is a medication and naturally occurring substance in the human body.[3] As a medication it used to treat pulmonary arterial hypertension and acute respiratory distress syndrome (ARDS).[2] It may also be used during dialysis when heparin cannot be used to prevent platelet aggregation.[1] It may be given by continuous injection into a vein or inhaled.[2][1]

Common side effects include headache, dizziness, nausea, muscle pain, flushing, fast heart rate, and low blood pressure.[2] Other side effects may include bleeding.[2] There is no evidence of harm in pregnancy, but such use has not been well studied.[4] It is a prostaglandin and works by blocking platelet aggregation and dilating blood vessels.[1]

It is used to treat pulmonary arterial hypertension (PAH).[6][7] Specifically, epoprostenol is given to people with class II or class IV PAH.[citation needed]

Redness of the skin induced by intravenous epoprostenol

The side effects of this medication , prostacyclin, are the following (this is not an exhaustive list):[8]

Prostacyclin (PGI2) is released by healthy endothelial cells and performs its function through a paracrine signaling cascade that involves G protein-coupled receptors on nearby platelets and endothelial cells. The platelet Gs protein-coupled receptor (prostacyclin receptor) is activated when it binds to PGI2. This activation, in turn, signals adenylyl cyclase to produce cAMP. cAMP goes on to inhibit any undue platelet activation (in order to promote circulation) and also counteracts any increase in cytosolic calcium levels that would result from thromboxane A2 (TXA2) binding (leading to platelet activation and subsequent coagulation). PGI2 also binds to endothelial prostacyclin receptors, and in the same manner, raises cAMP levels in the cytosol. This cAMP then goes on to activate protein kinase A (PKA). PKA then continues the cascade by promoting the phosphorylation of the myosin light chain kinase, which inhibits it and leads to smooth muscle relaxation and vasodilation. It can be noted that PGI2 and TXA2 work as physiological antagonists.

Prostacyclin (PGI2) chiefly prevents formation of the platelet plug involved in primary hemostasis (a part of blood clot formation). It does this by inhibiting platelet activation.[9] It is also an effective vasodilator. Prostacyclin's interactions contrast with those of thromboxane (TXA2), another eicosanoid. These strongly suggest a mechanism of cardiovascular homeostasis between these two hormones in relation to vascular damage.

Prostacyclin, which has a half-life of 42 seconds,[10] is broken down into 6-keto-PGF1, which is a much weaker vasodilator.

The production of prostacyclin is inhibited by the action of NSAIDs on cyclooxygenase enzymes COX1 and COX2. These convert arachidonic acid to prostaglandin H2 (PGH2), the immediate precursor of prostacyclin. Since thromboxane (an eicosanoid stimulator of platelet aggregation) is also downstream of COX enzymes, one might think that the effect of NSAIDs would act to balance. However, prostacyclin concentrations recover much faster than thromboxane levels, so aspirin administration initially has little to no effect but eventually prevents platelet aggregation (the effect of prostaglandins predominates as they are regenerated). This is explained by understanding the cells that produce each molecule, TXA2 and PGI2. Since PGI2 is primarily produced in a nucleated endothelial cell, the COX inhibition by NSAID can be overcome with time by increased COX gene activation and subsequent production of more COX enzymes to catalyze the formation of PGI2. In contrast, TXA2 is released primarily by anucleated platelets, which are unable to respond to NSAID COX inhibition with additional transcription of the COX gene because they lack DNA material necessary to perform such a task. This allows NSAIDs to result in PGI2 dominance that promotes circulation and retards thrombosis.

In patients with pulmonary hypertension, inhaled epoprostenol reduces pulmonary pressure, and improves right ventricular stroke volume in patients undergoing cardiac surgery. A dose of 60 μg is hemodynamically safe, and its effect is completely reversed after 25 minutes. No evidence of platelet dysfunction or an increase in surgical bleeding after administration of inhaled epoprostenol has been found.[11] The drug has been known to cause flushing, headaches and hypotension.[12] 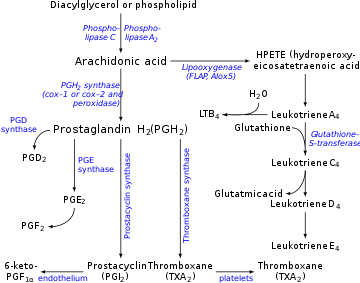 Prostacyclin is produced in endothelial cells, which line the walls of arteries and veins,[13] from prostaglandin H2 (PGH2) by the action of the enzyme prostacyclin synthase. Although prostacyclin is considered an independent mediator, it is called PGI2 (prostaglandin I2) in eicosanoid nomenclature, and is a member of the prostanoids (together with the prostaglandins and thromboxane). PGI2, derived primarily from COX-2 in humans, is the major arachidonate metabolite released from the vascular endothelium. This is a controversial point, some assign COX 1 as the major prostacyclin producing cyclooxygenase in the endothelial cells of the blood vessels. [14]

Prostacyclin can be synthesized from the methyl ester of prostaglandin F2α.[16] After its synthesis, the drug is reconstituted in saline and glycerin.[17]

A team at The Wellcome Foundation led by Salvador Moncada had identified a lipid mediator they called "PG-X," which inhibits platelet aggregation. PG-X, later known as prostacyclin, is 30 times more potent than any other then-known anti-aggregatory agent.

In 1976, Vane and fellow researchers Salvador Moncada, Ryszard Gryglewski, and Stuart Bunting published the first paper on prostacyclin in Nature.[18] The collaboration produced a synthesized molecule, which was named epoprostenol. But, as with native prostacyclin, the epoprostenol molecule is unstable in solution and prone to rapid degradation.[citation needed] This presented a challenge for both in vitro experiments and clinical applications.