Bradycardia may be normal, such as in those who are physically fit, older in age, or during an autonomic response.[5] It may also occur due to a number of health problems such as low oxygen, heart attack, low thyroid, AV block, high blood potassium, and toxicity due to beta blockers, calcium channel blockers, and digoxin.[3][1][4] Diagnosis is by an electrocardiogram (ECG).[3] The term "relative bradycardia" refer to a heart rate that, although not below 60 BPM, is considered too slow for the current medical condition.[6]

In those with symptoms atropine may be used.[1] Other measures may include cardiac pacing, either transcutaneous pacing or transvenous pacing, or infusions of the medications dopamine or epinephrine.[1] Bradycardia is common.[2][5] Bradycardia was described by Hippocrates before 370 BC.[7] 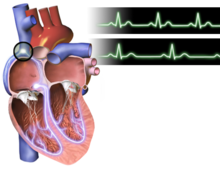 Illustration comparing the EKGs of a healthy person (top) and a person with bradycardia (bottom): The points on the heart where the EKG signals are measured are also shown.

Atrial bradycardias are divided into three types. The first, respiratory sinus arrhythmia, is usually found in young and healthy adults. Heart rate increases during inhalation and decreases during exhalation. This is thought to be caused by changes in the vagal tone during respiration.[8] If the decrease during exhalation drops the heart rate below 60 BPM on each breath, this type of bradycardia is usually deemed benign and a sign of good autonomic tone.

The second, sinus bradycardia, is a sinus rhythm of less than 60 BPM. It is a common condition found in both healthy individuals and those considered well-conditioned athletes. Studies have found that 50–85% of conditioned athletes have benign sinus bradycardia, as compared to 23% of the general population studied.[9] The heart muscle of athletes has become conditioned to have a higher stroke volume, so requires fewer contractions to circulate the same volume of blood.[8] During sleep, a slow heartbeat down to rates around 30–35 BPM is common, and is considered normal.[2] Trained athletes may also have athletic heart syndrome, a very slow resting heart rate that occurs as a sport adaptation and helps prevent tachycardia during training.[10]

An AV-junctional rhythm, or atrioventricular nodal bradycardia, is usually caused by the absence of the electrical impulse from the sinus node. This usually appears on an electrocardiogram (EKG) with a normal QRS complex accompanied with an inverted P wave either before, during, or after the QRS complex.[8]

An AV-junctional escape beat is a delayed heartbeat originating from an ectopic focus somewhere in the AV junction. It occurs when the rate of depolarization of the SA node falls below the rate of the AV node.[8] This dysrhythmia also may occur when the electrical impulses from the SA node fail to reach the AV node because of SA or AV block.[11] This is a protective mechanism for the heart, to compensate for an SA node that is no longer handling the pacemaking activity, and is one of a series of backup sites that can take over pacemaker function when the SA node fails to do so. This would present with a longer PR interval. An AV-junctional escape complex is a normal response that may result from excessive vagal tone on the SA node. Pathological causes include sinus bradycardia, sinus arrest, sinus exit block, or AV block.[8]

Idioventricular rhythm, also known as atrioventricular bradycardia or ventricular escape rhythm, is a heart rate of less than 50 BPM. This is a safety mechanism when a lack of electrical impulse or stimuli from the atrium occurs.[8] Impulses originating within or below the bundle of His in the AV node will produce a wide QRS complex with heart rates between 20 and 40 BPM. Those above the bundle of His, also known as junctional, will typically range between 40 and 60 BPM with a narrow QRS complex.[12][13] In a third-degree heart block, about 61% take place at the bundle branch-Purkinje system, 21% at the AV node, and 15% at the bundle of His.[13] AV block may be ruled out with an EKG indicating "a 1:1 relationship between P waves and QRS complexes."[12] Ventricular bradycardias occurs with sinus bradycardia, sinus arrest, and AV block. Treatment often consists of the administration of atropine and cardiac pacing.[8]

For infants, bradycardia is defined as a heart rate less than 100 BPM (normal is around 120–160 BPM) . Premature babies are more likely than full-term babies to have apnea and bradycardia spells; their cause is not clearly understood. The spells may be related to centers inside the brain that regulate breathing which may not be fully developed. Touching the baby gently or rocking the incubator slightly will almost always get the baby to start breathing again, which increases the heart rate. Medications (theophylline or caffeine) can be used to treat these spells in babies if necessary. Neonatal intensive-care unit (NICU) standard practice is to electronically monitor the heart and lungs for this reason.

This arrhythmia can be underlain by several causes, which are best divided into cardiac and non-cardiac causes. Non-cardiac causes are usually secondary, and can involve recreational drug use or abuse; metabolic or endocrine issues, especially hypothyroidism; an electrolyte imbalance; neurologic factors; autonomic reflexes; situational factors such as prolonged bed rest; and autoimmunity.[14]

With SA node dysfunction (sometimes called sick sinus syndrome), there may be disordered automaticity or impaired conduction of the impulse from the SA node into the surrounding atrial tissue (an "exit block"). Second-degree sinoatrial blocks can be detected only by use of a 12-lead EKG.[15] It is difficult and sometimes impossible to assign a mechanism to any particular bradycardia, but the underlying mechanism is not clinically relevant to treatment, which is the same in both cases of sick sinus syndrome: a permanent pacemaker.

Bradycardia is also part of the mammalian diving reflex.[16]

Bradycardia in an adult is any heart rate less than 60 beats per minute (BPM), although symptoms usually manifest only for heart rates less than 50 BPM.[1] This is determined usually either by palpation or EKG. If symptoms occur, a determination of electrolytes may be helpful in determining the underlying cause.

The treatment of bradycardia is dependent on whether or not the person is stable or unstable.[1] If oxygen saturations are low, supplemental oxygen should be provided.

Emergency treatment is not needed if the person is asymptomatic or minimally symptomatic.[1]

If a person is unstable, the initial recommended treatment is intravenous atropine.[1] Doses less than 0.5 mg should not be used, as this may further decrease the rate.[1] If this is not effective, intravenous inotrope infusion (dopamine, epinephrine) or transcutaneous pacing should be used.[1] Transvenous pacing may be required if the cause of the bradycardia is not rapidly reversible.[1]

In children, giving oxygen, supporting their breathing, and chest compressions are recommended.[17][18]

The US Centers for Disease Control and Prevention reported in 2011 that 15.2% of adult males and 6.9% of adult females had clinically-defined bradycardia (a resting pulse rate below 60 BPM).[19]

The word "bradycardia" is from the Greek βραδύς bradys "slow", and καρδία kardia "heart".[20]