Atrial flutter (AFL) is an abnormal heart rhythm that starts in the upper chambers of the heart.[2] Generally, it is initially presents with a sudden onset of a fast heart rate.[2][3] Symptoms may be absent or include a feeling of the heart beating too fast or hard, chest discomfort, shortness of breath, or lightheadedness.[1][2] Complications can include stroke or cardiomyopathy.[2]

The cause is often unknown.[4] Risk factors include COPD, pulmonary hypertension, heart failure, and endurance sports.[2][4] Triggers can include electrolyte abnormalities, high thyroid, or low oxygen.[2] It is a type of supraventricular tachycardia.[3] Diagnosis is generally by an electrocardiogram (ECG) showing a flutter wave at 300 beats per minute with narrow QRS complexes every 2nd beat.[2][3] If the diagnosis is unclear, giving adenosine may help clarify the condition.[3] It may also convert into atrial fibrillation (AF).[4]

The recommended treatment is generally conversion to sinus rhythm.[2] If the person is unstable, this is generally done with electrical cardioversion.[2] If the person is otherwise stable medications, such as diltiazem, or electricity may be used.[2] Blood thinners may be recommended before cardioversion in stable cases to decrease the risk of stroke.[2][6] Atrial flutter is often treated more definitively with a technique known as catheter ablation.[1] Blood thinners may be stopped 6 weeks after ablation, if it is successful.[4]

Atrial flutter is the second most common supraventricular tachycardia, occurring less than one-tenth as often as atrial fibrillation.[3][5] It newly occurs in about 88 per 100,000 people per year; 5 per 100,000 in those under 50 and 587 per 100,000 in those over 80.[5] Males are affected more often than females.[2] Atrial flutter was identified as an independent condition around 1912 by the British physician Sir Thomas Lewis (1881–1945), though the ECG pattern was described a year early by Jolly and Ritchie.[7][8]

While atrial flutter can sometimes go unnoticed, its onset is often marked by characteristic sensations of the heart feeling like it is beating too fast or hard. Such sensations usually last until the episode resolves, or until the heart rate is controlled.

Atrial flutter is usually well tolerated initially (a high heart rate is for most people just a normal response to exercise), however, people with other underlying heart disease (such as coronary artery disease) or poor exercise tolerance may rapidly develop symptoms, such as shortness of breath, chest pain, lightheadedness or dizziness, nausea and, in some patients, nervousness and feelings of impending doom.

Prolonged atrial flutter with fast heart rates may lead to decompensation with loss of normal heart function (heart failure). This may manifest as exercise intolerance (exertional breathlessness), difficulty breathing at night, or swelling of the legs and/or abdomen.

Although often regarded as a relatively benign heart rhythm problem, atrial flutter shares the same complications as the related condition atrial fibrillation. There is paucity of published data directly comparing the two, but overall mortality in these conditions appears to be very similar.[9]

Rapid heart rates may produce significant symptoms in patients with pre-existing heart disease and can lead to inadequate blood flow to the heart muscle and even a heart attack.[1] In rare situations, atrial flutter associated with a fast heart rate persists for an extended period of time without being corrected to a normal heart rhythm and leads to a tachycardia-induced cardiomyopathy.[1] Even in individuals with a normal heart, if the heart beats too quickly for a prolonged period of time, this can lead to ventricular decompensation and heart failure.

Because there is little if any effective contraction of the atria there is stasis (pooling) of blood in the atria. Stasis of blood in susceptible individuals can lead to the formation of a thrombus (blood clot) within the heart. A thrombus is most likely to form in the atrial appendages. A blood clot in the left atrial appendage is particularly important as the left side of the heart supplies blood to the entire body through the arteries. Thus, any thrombus material that dislodges from this side of the heart can embolize (break off and travel) to the brain's arteries, with the potentially devastating consequence of a stroke. Thrombus material can, of course, embolize to any other portion of the body, though usually with a less severe outcome.

Sudden death is not directly associated with atrial flutter. However, in individuals with a pre-existing accessory conduction pathway, such as the bundle of Kent in Wolff-Parkinson-White syndrome, the accessory pathway may conduct activity from the atria to the ventricles at a rate that the AV node would usually block. Bypassing the AV node, the atrial rate of 300 beats/minute leads to a ventricular rate of 300 beats/minute (1:1 conduction). Even if the ventricles are able to sustain a cardiac output at such a high rates, 1:1 flutter with time may degenerate into ventricular fibrillation, causing hemodynamic collapse and death.

Atrial flutter is caused by a re-entrant rhythm. This usually occurs along the cavo-tricuspid isthmus of the right atrium though atrial flutter can originate from the left atrium as well. Typically initiated by a premature electrical impulse arising in the atria, atrial flutter is propagated due to differences in refractory periods of atrial tissue. This creates electrical activity that moves in a localized self-perpetuating loop, which usually lasts about 200 milliseconds for the complete circuit. For each cycle around the loop, an electric impulse results and propagates through the atria.

The impact and symptoms of atrial flutter depend on the heart rate of the affected person. Heart rate is a measure of the ventricular rather than atrial activity. Impulses from the atria are conducted to the ventricles through the atrio-ventricular node (AV node). In a person with atrial flutter, a 12-lead electrocardiogram (ECG) will demonstrate the atrial chambers of the heart contracting at a rate of 280–300 beats per minute whereas the ventricular chambers of the heart typically beat at a rate of 140–150 beats per minute.[3] Due primarily to its longer refractory period, the AV node exerts a protective effect on heart rate by blocking atrial impulses in excess of about 180 beats/minute, for the example of a resting heart rate. (This block is dependent on the age of the patient, and can be calculated roughly by subtracting patient age from 220). If the flutter rate is 300/minute only half of these impulses will be conducted, giving a ventricular rate of 150/minute, or a 2:1 heart block. The addition of rate-controlling drugs or conduction system disease can increase this block substantially (see image below). 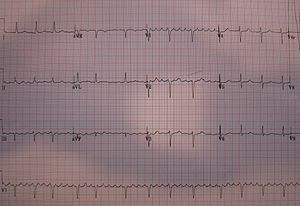 Atrial flutter with a two to one block. Note the P waves hiding in the T waves in leads V1 and V2

The reentrant loop circles the right atrium, passing through the cavo-tricuspid isthmus – a body of fibrous tissue in the lower atrium between the inferior vena cava, and the tricuspid valve.[1] Type I flutter is further divided into two subtypes, known as counterclockwise atrial flutter and clockwise atrial flutter depending on the direction of current passing through the loop.[1]

In general, atrial flutter should be managed the same as atrial fibrillation. Because both rhythms can lead to the formation of a blood clot in the atrium, individuals with atrial flutter usually require some form of anticoagulation or antiplatelet agent. Both rhythms can be associated with dangerously fast heart rates and thus require medication to control the heart rate (such as beta blockers or calcium channel blockers) and/or rhythm control with class III antiarrhythmics (such as ibutilide or dofetilide). However, atrial flutter is more resistant to correction with such medications than atrial fibrillation.[1] For example, although the class III antiarrhythmic agent ibutilide is an effective treatment for atrial flutter, rates of recurrence after treatment are quite high (70–90%).[1] Additionally, there are some specific considerations particular to treatment of atrial flutter.

Atrial flutter is considerably more sensitive to electrical direct current cardioversion than atrial fibrillation, with a shock of only 20 to 50 Joules commonly being enough to cause a return to a normal heart rhythm (sinus rhythm). Exact placement of the pads does not appear important.[13]