Rituximab, sold under the brand name Rituxan among others, is a medication used to treat certain autoimmune diseases and types of cancer.[4] It is used for non-Hodgkin lymphoma, chronic lymphocytic leukemia, rheumatoid arthritis, granulomatosis with polyangiitis, idiopathic thrombocytopenic purpura, pemphigus vulgaris, myasthenia gravis and Epstein–Barr virus-positive mucocutaneous ulcers.[4][5][6][7] It is given by slow injection into a vein.[4]

Common side effects, which often occur within two hours of the medication being given, include rash, itchiness, low blood pressure, and shortness of breath.[4] Other severe side effects include reactivation of hepatitis B in those previously infected, progressive multifocal leukoencephalopathy, and toxic epidermal necrolysis.[4][8] It is unclear if use during pregnancy is safe for the baby.[4][2]

Rituximab is a chimeric monoclonal antibody against the protein CD20, which is primarily found on the surface of immune system B cells.[9] When it binds to this protein it triggers cell death.[4]

Rituximab destroys both normal and malignant B cells that have CD20 on their surfaces and is therefore used to treat diseases which are characterized by having too many B cells, overactive B cells, or dysfunctional B cells.[medical citation needed]

Rituximab is used to treat cancers of the white blood system such as leukemias and lymphomas, including non-Hodgkin's lymphoma, chronic lymphocytic leukemia, and lymphocyte predominant subtype, of Hodgkin's Lymphoma.[18] This also includes Waldenström's macroglobulinemia a type of NHL.[4]

There is some evidence for efficacy, but not necessarily safety, in a range of other autoimmune diseases, and rituximab is widely used off-label to treat difficult cases of multiple sclerosis,[21][22] systemic lupus erythematosus, chronic inflammatory demyelinating polyneuropathy and autoimmune anemias.[23] The most dangerous, although among the most rare, side effect is progressive multifocal leukoencephalopathy (PML) infection, which is usually fatal; however only a very small number of cases have been recorded occurring in autoimmune diseases.[23][24]

Rituximab is being used off-label in the management of kidney transplant recipients. This drug may have some utility in transplants involving incompatible blood groups. It is also used as induction therapy in highly sensitized patients going for kidney transplantation. The use of rituximab has not been proven to be efficacious in this setting and like all depleting agents, carries with it the risk of infection.[citation needed]

The defined daily dose is not established[3]

Serious adverse events, which can cause death and disability, include:[15][4]

Two patients with systemic lupus erythematosus died of progressive multifocal leukoencephalopathy (PML) after being treated with rituximab. PML is caused by activation of JC virus, a common virus in the brain which is usually latent. Reactivation of the JC virus usually results in death or severe brain damage.[39]

At least one patient with rheumatoid arthritis developed PML after treatment with rituximab.[40] 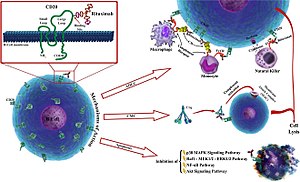 The antibody binds to the cell surface protein CD20. CD20 is widely expressed on B cells, from early pre-B cells to later in differentiation, but it is absent on terminally differentiated plasma cells. Although the function of CD20 is unknown, it may play a role in Ca2+ influx across plasma membranes, maintaining intracellular Ca2+ concentration and allowing activation of B cells.

Rituximab is relatively ineffective in elimination of cells with low CD20 cell-surface levels. It tends to stick to one side of B cells, where CD20 is, forming a cap and drawing proteins over to that side. The presence of the cap changes the effectiveness of natural killer (NK) cells in destroying these B cells. When an NK cell latched onto the cap, it had an 80% success rate at killing the cell. In contrast, when the B cell lacked this asymmetric protein cluster, it was killed only 40% of the time.[43][44]

The following effects have been found:[45]

The combined effect results in the elimination of B cells (including the cancerous ones) from the body, allowing a new population of healthy B cells to develop from lymphoid stem cells.

Rituximab was developed by researcher Nabil Hanna and coworkers at IDEC Pharmaceuticals under the name IDEC-C2B8. The U.S. patent for the drug was issued in 1998 and expired in 2015.[47]

Based on its safety and effectiveness in clinical trials,[48] rituximab was approved by the U.S. Food and Drug Administration in 1997 to treat B-cell non-Hodgkin lymphomas resistant to other chemotherapy regimens.[49] Rituximab, in combination with CHOP chemotherapy, is superior to CHOP alone in the treatment of diffuse large B-cell lymphoma and many other B-cell lymphomas.[50] In 2010, it was approved by the European Commission for maintenance treatment after initial treatment of follicular lymphoma.[51]

Rituximab is currently co-marketed by Biogen and Genentech in the U.S., by Hoffmann-La Roche in Canada and the European Union, Chugai Pharmaceuticals, Zenyaku Kogyo in Japan and AryoGen in Iran.[citation needed]

It is on the World Health Organization's List of Essential Medicines, the safest and most effective medicines needed in a health system.[10]

In 2014 Genentech reclassified rituxan as a specialty drug, a class of drugs that are only available through specialty distributors in the US.[52] Because wholesalers discounts and rebates no longer apply, hospitals would pay more.[52]

Originally available for intravenous injection (e.g. over 2.5 hrs), in 2016 it gained EU approval in a formulation for subcutaneous injection for CLL.[53]

For CNS diseases, rituximab could be administered intrathecally and this possibility is under study.[60]

The efficacy and success of Rituximab has led to some other anti-CD20 monoclonal antibodies being developed: