Teriflunomide, sold under the brand name Aubagio, is a medication used to treat multiple sclerosis (MS); specifically relapsing-remitting MS.[2][3] In Scotland it is used as a second line treatment to interferon beta and glatiramer.[1] It is taken by mouth.[2]

Common side effects include headache, diarrhea, liver problems, nausea, and hair loss.[3] Other side effects may include liver failure, peripheral neuropathy, and interstitial lung disease.[2] Use in the two years before or during pregnancy may harm the baby.[1] It is a pyrimidine synthesis inhibitor.[1] While how it works is not entirely clear, it is believed to decrease the number of lymphocytes.[3] It is the active metabolite of leflunomide.[2]

Teriflunomide was investigated in the phase III clinical trial TEMSO as a medication for multiple sclerosis (MS).[6] However, a subsequent comparison trial reported that although permanent discontinuations were less common among people with MS who received teriflunomide compared with interferon beta-1a, relapses were more common with teriflunomide.[7]

Teriflunomide is an immunomodulatory drug inhibiting pyrimidine de novo synthesis by blocking the enzyme dihydroorotate dehydrogenase. It is uncertain whether this explains its effect on MS lesions.[8]

Teriflunomide inhibits rapidly dividing cells, including activated T cells, which are thought to drive the disease process in MS. Teriflunomide may decrease the risk of infections compared to chemotherapy-like drugs because of its more-limited effects on the immune system.[9]

It has been found that teriflunomide blocks the transcription factor NF-κB. It also inhibits tyrosine kinase enzymes, but only in high doses not clinically used.[10] 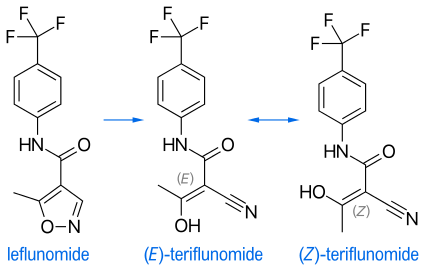 Teriflunomide is the only active metabolite of leflunomide, completely responsible for its therapeutic actions. It results from the reaction of isoxazole ring opening, which occurs in vivo. Teriflunomide then can interconvert between the E and Z enolic forms (and the corresponding keto-amide), the Z-enol being the most stable and therefore most predominant form.[12][13]

"Regardless of the substance administered (leflunomide or teriflunomide), it is the same molecule (teriflunomide)—the one exerting the pharmacological, immunological or metabolic action in view of restoring, correcting or modifying physiological functions, and does not present, in clinical use, a new chemical entity to patients."[11] Because of this, EMA initially had not considered teriflunomide being a new active substance.[14]