Fluconazole is an antifungal medication used for a number of fungal infections.[1] This includes candidiasis, blastomycosis, coccidiodomycosis, cryptococcosis, histoplasmosis, dermatophytosis, and pityriasis versicolor.[1] It is also used to prevent candidiasis in those who are at high risk such as following organ transplantation, low birth weight babies, and those with low blood neutrophil counts.[1] It is given either by mouth or by injection into a vein.[1]

Common side effects include vomiting, diarrhea, rash, and increased liver enzymes.[1] Serious side effects may include liver problems, QT prolongation, and seizures.[1] During pregnancy it may increase the risk of miscarriage while large doses may cause birth defects.[4][1] Its use in the first trimester is thus not recommended.[5] Fluconazole is in the azole antifungal family of medication.[1] It is believed to work by affecting the fungal cellular membrane.[1]

Fluconazole was patented in 1981 and came into commercial use in 1988.[6] It is on the World Health Organization's List of Essential Medicines.[7] Fluconazole is available as a generic medication.[1] The wholesale cost in the developing world is about US$0.05–0.10 per day.[8] In the United States the wholesale price is about US$1.14–1.75 per day as of 2016.[9] In 2017, it was the 182nd most commonly prescribed medication in the United States, with more than three million prescriptions.[10][11]

Fluconazole's spectrum of activity includes most Candida species (but not Candida krusei or Candida glabrata), Cryptococcus neoformans, some dimorphic fungi, and dermatophytes, among others. Common uses include:[12][13][14][15][16]

Fungal resistance to drugs in the azole class tends to occur gradually over the course of prolonged drug therapy, resulting in clinical failure in immunocompromised patients (e.g., patients with advanced HIV receiving treatment for thrush or esophageal Candida infection).[17]

In C. albicans, resistance occurs by way of mutations in the ERG11 gene, which codes for 14α-demethylase. These mutations prevent the azole drug from binding, while still allowing binding of the enzyme's natural substrate, lanosterol. Development of resistance to one azole in this way will confer resistance to all drugs in the class. Another resistance mechanism employed by both C. albicans and C. glabrata is increasing the rate of efflux of the azole drug from the cell, by both ATP-binding cassette and major facilitator superfamily transporters. Other gene mutations are also known to contribute to development of resistance.[17] C. glabrata develops resistance by up regulating CDR genes, and resistance in C. krusei is mediated by reduced sensitivity of the target enzyme to inhibition by the agent.[18]

The full spectrum of fungal susceptibility and resistance to fluconazole can be found in the TOKU-E's product data sheet.[19] According to the United States Centers for Disease Control, fluconazole resistance among Candida strains in the U.S. is about 7%.[20]

Fluconazole is contraindicated in people who:[16] 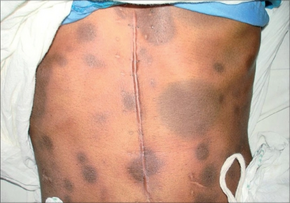 Side effects associated with fluconazole therapy include:[16]

If taken during pregnancy it may result in harm.[24][25] These cases of harm, however, were only in women who took large doses for most of the first trimester.[24]

Fluconazole is secreted in human milk at concentrations similar to plasma. Therefore, the use of fluconazole in lactating mothers is not recommended.[26]

Fluconazole therapy has been associated with QT interval prolongation, which may lead to serious cardiac arrhythmias. Thus, it is used with caution in patients with risk factors for prolonged QT interval, such as electrolyte imbalance or use of other drugs that may prolong the QT interval (particularly cisapride and pimozide).[27]

Fluconazole has also rarely been associated with severe or lethal hepatotoxicity, so liver function tests are usually performed regularly during prolonged fluconazole therapy. In addition, it is used with caution in patients with pre-existing liver disease.[28]

Fluconazole taken at low doses is in FDA pregnancy category C. However, high doses have been associated with a rare and distinct set of birth defects in infants. If taken at these doses, the pregnancy category is changed from category C to category D. Pregnancy category D means there is positive evidence of human fetal risk based on human data. In some cases, the potential benefits from use of the drug in pregnant women with serious or life-threatening conditions may be acceptable despite its risks. Fluconazole should not be taken during pregnancy or if one could become pregnant during treatment without first consulting a doctor.[31] Oral fluconazole is not associated with a significantly increased risk of birth defects overall, although it does increase the odds ratio of tetralogy of Fallot, but the absolute risk is still low.[32] Women using fluconazole during pregnancy have a 50% higher risk of spontaneous abortion.[33]

Fluconazole should not be taken with cisapride (Propulsid) due to the possibility of serious, even fatal, heart problems.[27] In rare cases, severe allergic reactions including anaphylaxis may occur.[34]

Fluconazole is an inhibitor of the human cytochrome P450 system, particularly the isozyme CYP2C19 (CYP3A4 and CYP2C9 to lesser extent) [36] In theory, therefore, fluconazole decreases the metabolism and increases the concentration of any drug metabolised by these enzymes. In addition, its potential effect on QT interval increases the risk of cardiac arrhythmia if used concurrently with other drugs that prolong the QT interval. Berberine has been shown to exert synergistic effects with fluconazole even in drug-resistant Candida albicans infections.[37] Fluconazole may increase the serum concentration of Erythromycin (Risk X: avoid combination).[36]

Like other imidazole- and triazole-class antifungals, fluconazole inhibits the fungal cytochrome P450 enzyme 14α-demethylase. Mammalian demethylase activity is much less sensitive to fluconazole than fungal demethylase. This inhibition prevents the conversion of lanosterol to ergosterol, an essential component of the fungal cytoplasmic membrane, and subsequent accumulation of 14α-methyl sterols.[28] Fluconazole is primarily fungistatic; however, it may be fungicidal against certain organisms in a dose-dependent manner, specifically Cryptococcus.[38]

Following oral dosing, fluconazole is almost completely absorbed within two hours.[39] Bioavailability is not significantly affected by the absence of stomach acid. Concentrations measured in the urine, tears, and skin are approximately 10 times the plasma concentration, whereas saliva, sputum, and vaginal fluid concentrations are approximately equal to the plasma concentration, following a standard dose range of between 100 mg and 400 mg per day.[40] The elimination half-life of fluconazole follows zero order, and only 10% of elimination is due to metabolism, the remainder being excreted in urine and sweat. Patients with impaired renal function will be at risk of overdose.[27]

In a bulk powder form, it appears as a white crystalline powder, and it is very slightly soluble in water and soluble in alcohol.[41]