Adalimumab, sold under the brand name Humira among others, is a medication used to treat rheumatoid arthritis, psoriatic arthritis, ankylosing spondylitis, Crohn's disease, ulcerative colitis, psoriasis, hidradenitis suppurativa, uveitis, and juvenile idiopathic arthritis.[3][4][5] Use is generally only recommended in people who have not responded to other treatments.[4] It is used by injection under the skin.[3]

Common side effects include upper respiratory tract infections, pain at the site of injection, rash, and headache.[3] Other side effects may include serious infections, cancer, anaphylaxis, reactivation of hepatitis B, multiple sclerosis, heart failure, liver failure, and aplastic anemia.[3] Use during pregnancy is not recommended, while some feel use during breastfeeding may be safe.[4][6] Adalimumab is a disease-modifying antirheumatic drug and monoclonal antibody that works by inactivating tumor necrosis factor-alpha (TNFα).[3]

Adalimumab was approved for medical use in the United States in 2002.[7][3] It is on the World Health Organization's List of Essential Medicines.[8] A month supply in the United Kingdom costs the NHS about £704 as of 2018.[4] In the United States the wholesale cost of this amount is about US$5,041.[9] In 2014, a biosimilar came to market in India at a price of US$400 per month,[10] and biosimilars are now avaliable in the USA and Europe.[11] In 2017, it was the 169th most commonly prescribed medication in the United States, with more than three million prescriptions.[12][13]

Like other TNF inhibitors, it is an immunosuppressive medication, used to treat autoimmune diseases such as rheumatoid arthritis.[14][15]

Adalimumab is administered by subcutaneous injection.[3][14] For most indications, the maintenance treatment is an injection every other week.[3][14][16]

In the EU it is indicated for the treatment of:

Adalimumab has been shown to reduce the signs and symptoms of moderate to severe rheumatoid arthritis in adults. It may be used alone or in combination with disease-modifying antirheumatic drugs (DMARD).[17] It has also been shown to have efficacy in moderate to severe polyarticular juvenile idiopathic arthritis in children four years and older, and is indicated for the treatment of that condition. In rheumatoid athritis, it is indicated for use alone, or with methotrexate or similar medicines, in the United States since 2002.[18][19] It has a similar effectiveness as methotrexate and, in combination, nearly doubles the response rate of methotrexate alone.[20]

In 2003, adalimumab began undergoing trials for use in treating psoriasis and psoriatic arthritis.[21]

Adalimumab has been shown to reduce the signs and symptoms of, and is approved for treatment of, ankylosing spondylitis in adults.[22]

Adalimumab has been shown to reduce the signs and symptoms of moderate to severe Crohn's disease.[23][11][24] It has been approved for that use in the UK since 2009.[25]

Adalimumab may be effective and well tolerated in ulcerative colitis. It was approved by the US Food and Drug Administration (FDA) for treatment of moderate to severe cases in adults.[26][27]

Adalimumab has been shown to treat moderate to severe chronic plaque psoriasis in adults who have the condition in many areas of their body and who may benefit from taking injections or pills (systemic therapy) or phototherapy (treatment using ultraviolet light alone or with pills).[28] Adalimumab has been shown to be effective therapy when used either continuously or intermittently in patients with moderate to severe psoriasis.[29]

Adalimumab has been shown to reduce the signs and symptoms of moderate to severe polyarticular juvenile idiopathic arthritis in children aged four years and older.[32][33][34]

Adalimumab is indicated for the treatment of non-infectious uveitis (inflammation of the layer beneath the white of the eyeball).[16][14] 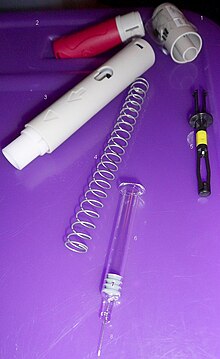 Components of a Humira autoinjector pen.

There are rare reports of serious liver injury; rare reports of demyelinating central nervous system disorders; and rare reports of cardiac failure—the US Food and Drug Administration (FDA) issued a black box warning to doctors, which appears in the product labeling of adalimumab and other TNF-inhibiting drugs, instructing them to screen and monitor potential patients more carefully.[36] Anaphylaxis or other serious allergic reactions may also occur.[36]

Adalimumab was the first fully human monoclonal antibody approved by the US Food and Drug Administration (FDA).[37] It was derived from phage display.[38][37]

Adalimumab was discovered as a result of a collaboration between BASF Bioresearch Corporation and Cambridge Antibody Technology, U.K., itself a collaboration of the government-funded Medical Research Council and three academics, which began in 1993.[39][40][37]

Initially named D2E7,[41] it was then further manufactured at BASF Bioresearch Corporation, developed by BASF Knoll (BASF Pharma), and ultimately manufactured and marketed by Abbott Laboratories after Abbott's acquisition of BASF Pharma. On 1 January 2013, Abbott split into two companies, one retaining the Abbott name and the other named AbbVie.[42] As a result, AbbVie took over development and marketing of Humira.[43][44] The brand name Humira stands for "human monoclonal antibody in rheumatoid arthritis", and was named by one of Abbott's employees, Richard J. Karwoski, who was also responsible for leading the effort to get Humira approved by the FDA.

It was the third TNF inhibitor, after infliximab and etanercept, to be approved in the United States.[37] It was constructed from a fully human monoclonal antibody, while infliximab is a mouse-human chimeric antibody and etanercept is a TNF receptor-IgG fusion protein.[medical citation needed]

The drug candidate was discovered initially using CAT's phage display technology and named D2E7.[41] The key components of the drug were found by guiding the selection of human antibodies from phage display repertoires to a single epitope of an antigen TNF alpha.[45] The ultimate clinical candidate, D2E7, was created and manufactured at BASF Bioresearch Corporation and taken through most of the drug development process by BASF Knoll, then further development, manufacturing and marketing by Abbott Laboratories, after Abbott acquired the pharmaceutical arm of BASF Knoll.[46]

Since 2008, adalimumab had been approved by the FDA for the treatment of rheumatoid arthritis, psoriatic arthritis, ankylosing spondylitis, Crohn's disease, moderate to severe chronic psoriasis and juvenile idiopathic arthritis. Although only approved for ulcerative colitis from late 2012, by the FDA in the disease's management, it had been used for several years in cases that have not responded to conventional treatment at standard dosing for Crohn's disease.[citation needed]

Adalimumab, sold under the brand name Humira, was approved for use in the United States in 2002.[7][47]

Adalimumab, sold under the brand names Humira and Trudexa, was approved for use in the European Union in September 2003.[16][48]

In 2014, a biosimilar came to market in India at a lower price compared to United States prices.[10]

In March 2003, Cambridge Antibody Technology (CAT) stated its wish to "initiate discussions regarding the applicability of the royalty offset provisions for Humira" with Abbott Laboratories in the High Court of London. In November 2004, the trial began, and in December 2004, Justice Hugh Laddie ruled for CAT.

A short version of the full statement of the proceedings was released.[63] In it Justice Laddie remarked, "Abbott was in error when it made its first royalty payment to CAT calculated on the basis that only 2% of the Net Sales was due. It should have calculated on the basis of the full royalty of just over 5% and should have paid and continued to pay CAT accordingly." Justice Laddie went on to observe "...that the construction advanced by Abbott does violence to the language of the agreements, renders them obscure and makes little or no commercial sense. For this reason CAT wins the action."[64]

Abbott was required to pay CAT US$255 million, some of which was to be passed to its partners in development.[65] Of this sum, the Medical Research Council received US$191 million, and in addition, Abbott was asked to pay the MRC a further US$7.5 million over five years from 2006, providing that Humira remains on the market. The MRC also is to receive a further £5.1 million (sterling) in respect of past royalties.[66]

On 29 May 2009, Johnson & Johnson's Centocor unit, the maker of infliximab, won a ruling for $1.67 billion from Abbott Laboratories for patent infringement on the process for making Humira.[67] However, in 2011, the judgment was overturned by the United States Court of Appeals for the Federal Circuit.[68][69][70]

Adalimumab biosimilars became available in Europe in late 2018,[87] allowing the National Health Service to make record-breaking cost-savings,[88] as this is the single most expensive drug used in NHS hospitals, costing more than £400 million a year for about 46,000 patients.[89] It may not become available in the United States until 2023.[87][90]

In July 2019, adalimumab-bwwd (Hadlima), produced by Samsung Bioepsis, was approved for use in the US.[95][96] However, it will not be available until at least June 2023, after the availability of Amgen's offering as a result of a negotiated intellectual property settlement with AbbVie.[97]

In February 2020, the biosimilar Amsparity was approved for use in the European Union.[101]